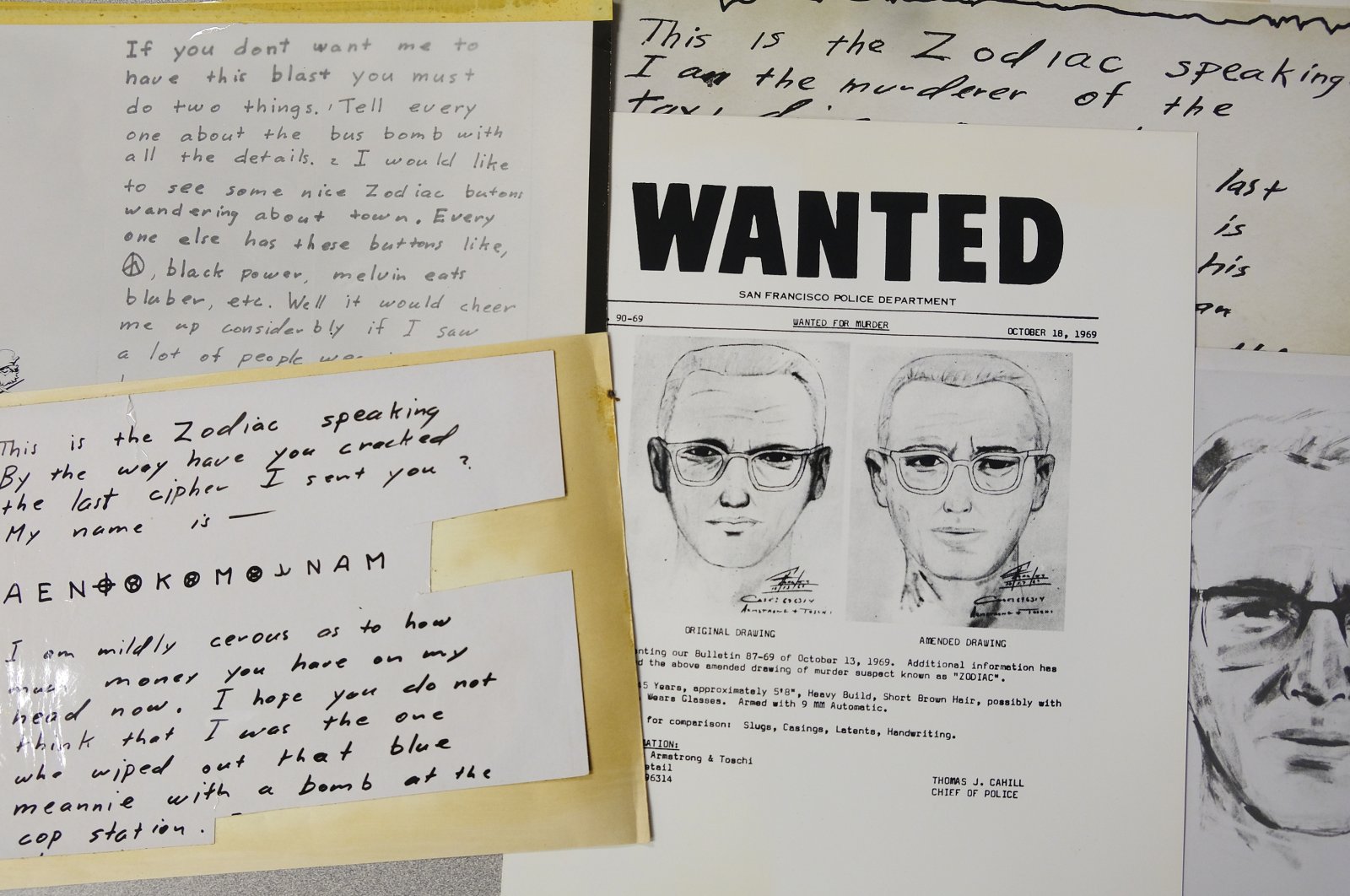 A San Francisco Police Department wanted bulletin and copies of letters sent to the San Francisco Chronicle by a man who called himself Zodiac are displayed in San Francisco, May 3, 2018. (AP Photo)
by French Press Agency - AFP Dec 12, 2020 11:47 am
RECOMMENDED

A team of cryptography enthusiasts announced Friday they had successfully cracked one of the coded messages sent over 50 years ago by the Zodiac Killer, who terrorized northern California in the late 1960s and remains unidentified.

The message was sent in November 1969 to the San Francisco Chronicle newspaper by the alleged serial killer, its code consisting of a series of cryptic letters and symbols.

Sleuths hoped the coded message contained the identity of the killer, who committed at least five murders in 1968 and 1969 but claimed 37 in total and inspired other serial killers.

According to the trio said to have broken the code, the message includes boasts and defiance of authorities without any real clues on motive or identity.

It includes to message: "I hope you are having lots of fun in trying to catch me ... I am not afraid of the gas chamber because it will send me to paradice (sic) all the sooner because I now have enough slaves to work for me."

It took several computer programs and years of work for David Oranchak, a 46-year-old American web designer, to decipher the complex code he started working on in 2006.

He was helped by Sam Blake, an Australian mathematician, and Jarl Van Eykcke, a Belgian logistician, he told the San Francisco Chronicle, which confirmed the discovery with the FBI, the federal agency in charge of the investigation.

A first message sent to Californian newspapers was decoded by a schoolteacher and his wife in 1969.

"I like killing because it is so much fun," it said, again referring to "slaves" that he claimed to collect to serve him in the afterlife.

But the code used in the first message was much simpler than the one for "340 Cipher," so called because it contains 340 characters spread throughout 17 columns.

"All of us in the crypto community on the Zodiac figured the cipher had another step beyond just figuring out what letters belonged to the symbols, and that's just what we found here," said Oranchak.

The 340 Cipher is read diagonally, starting from the upper-left corner and shifting one box down and two boxes to the right.

When the bottom is reached, the reader must go back to the opposite corner, said the expert in a video posted on his YouTube channel.

According to him, the coding system appears in particular in a cryptography manual for the U.S. Army dating from the 1950s.