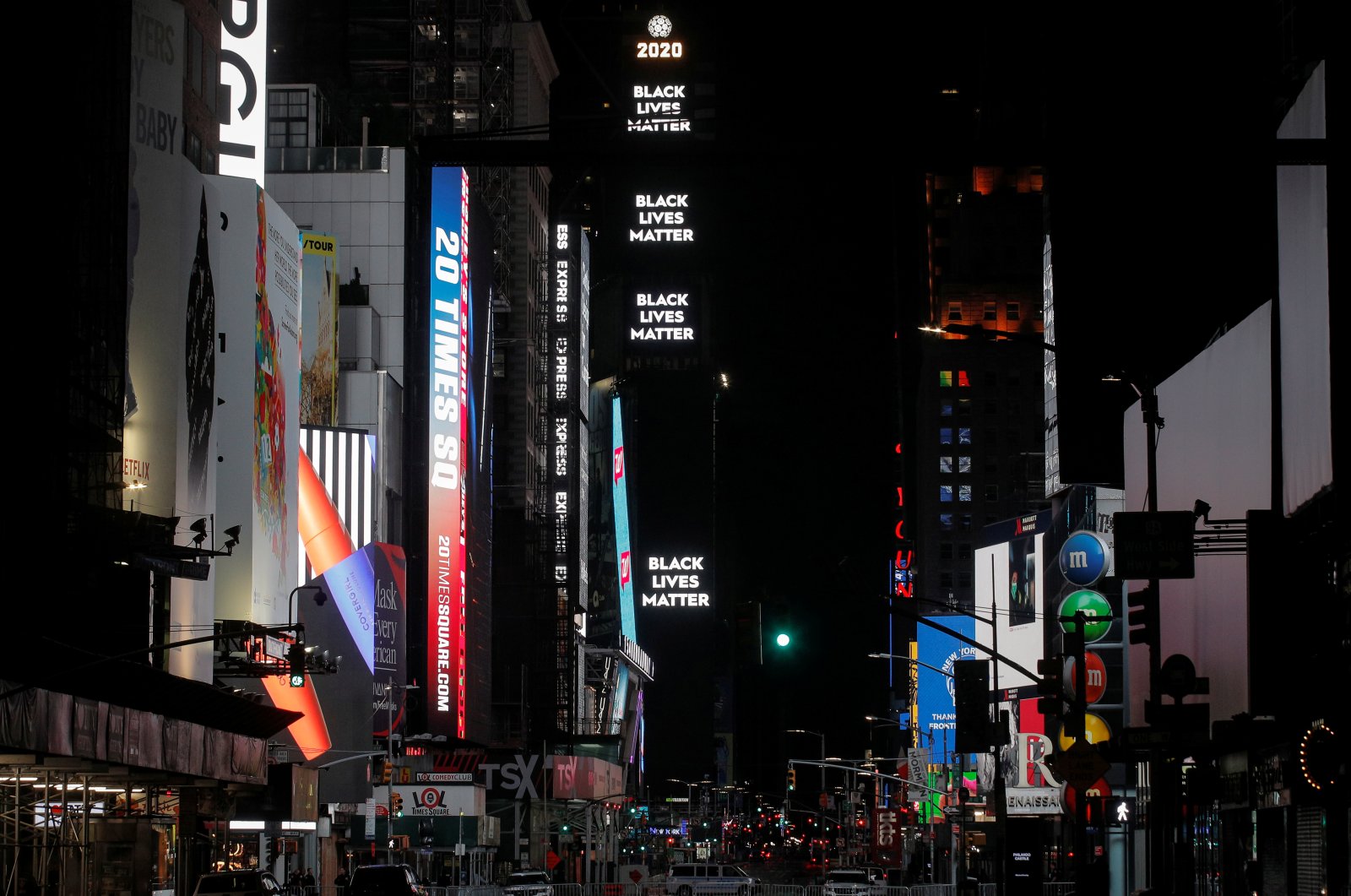 Barricades and New York City Police vehicles block the entrance to Times Square, as a sign displays "Black Lives Matter" after a curfew due to protests against the death in Minneapolis police custody of George Floyd, after curfew in the Manhattan borough of New York City, U.S., June 3, 2020. (Reuters Photo)
by ASSOCIATED PRESS Jun 03, 2020 11:39 am
RECOMMENDED

Protests were largely peaceful and the nation's streets were calmer than they have been in days since the killing of George Floyd set off demonstrations that at times brought violence and destruction along with pleas to stop police brutality and injustice against African Americans.

There were scattered reports of looting in New York City overnight, and as of Wednesday morning, there had been over 9,000 arrests nationwide since the unrest began following Floyd's death on May 25 in Minneapolis. But there was a marked quiet compared with the unrest of the past few nights, which included fires and shootings in some cities.

The calmer night came as many cities intensified their curfews, with authorities in New York and Washington ordering people off streets while it was still daylight.

A block away from the White House, thousands of demonstrators massed following a crackdown a day earlier when officers on foot and horseback aggressively drove peaceful protesters away from Lafayette Park, clearing the way for President Donald Trump to do a photo op at nearby St. John’s Church. Tuesday's protesters faced law enforcement personnel who stood behind a black chain-link fence that was put up overnight to block access to the park.

"Last night pushed me way over the edge,” said Jessica DeMaio, 40, of Washington, who attended a Floyd protest Tuesday for the first time. "Being here is better than being at home feeling helpless.”

Pastors at the church prayed with demonstrators and handed out water bottles. The crowd remained in place after the city’s 7 p.m. curfew passed, defying warnings that the response from law enforcement could be even more forceful. But the crowd Tuesday was peaceful, even polite. At one point, the crowd booed when a protester climbed a light post and took down a street sign. A chant went up: "Peaceful protest!”

Trump, meanwhile, amplified his hard-line calls from Monday, when he threatened to send in the military to restore order if governors didn’t do it.

"NYC, CALL UP THE NATIONAL GUARD,” he tweeted. "The lowlifes and losers are ripping you apart. Act fast!”

Thousands of people remained in the streets of New York City Tuesday night, undeterred by an 8 p.m. curfew, though most streets were clear by early Wednesday other than police who were patrolling some areas. Midtown Manhattan was pocked with battered storefronts after Monday’s protests.

"God as my witness, change is coming,” Art Acevedo said. "And we’re going to do it the right way.”

More than 20,000 National Guard members have been called up in 29 states to deal with the violence. New York is not among them, and Mayor Bill de Blasio has said he does not want the Guard. On Tuesday, Democratic Gov. Andrew Cuomo called what happened in the city "a disgrace.”

"The NYPD and the mayor did not do their job last night,” Cuomo said at a briefing in Albany.

He said the mayor underestimated the problem, and the nation’s largest police force was not deployed in sufficient numbers, though the city had said it doubled the usual police presence.

Tuesday marked the eighth straight night of the protests, which began after a white Minneapolis police officer pressed his knee against Floyd's neck while the handcuffed black man called out that he couldn't breathe. The officer, Derek Chauvin, has been fired and charged with murder.

The mother of George Floyd’s 6-year-old daughter, Gianna, said she wanted the world to know that her little girl lost a good father.

"I want everybody to know that this is what those officers took,” Roxie Washington said during a Minneapolis news conference with her young daughter at her side. "I want justice for him because he was good. No matter what anybody thinks, he was good.”

Some protesters framed the burgeoning movement as a necessity after a string of killings by police.

"It feels like it’s just been an endless cascade of hashtags of black people dying, and it feels like nothing’s really being done by our political leaders to actually enact real change,” said Christine Ohenzuwa, 19, who attended a peaceful protest at the Minnesota State Capitol in St. Paul. "There’s always going to be a breaking point. I think right now, we’re seeing the breaking point around the country.”

"I live in this state. It’s really painful to see what’s going on, but it’s also really important to understand that it’s connected to a system of racial violence,” she said.

Meanwhile, governors and mayors, Republicans and Democrats alike, rejected Trump's threat to send in the military, with some saying troops would be unnecessary and others questioning whether the government has such authority and warning that such a step would be dangerous.

A senior White House official, speaking on condition of anonymity, said that the president is not rushing to send in the military and that his goal was to pressure governors to deploy more National Guard members.

Such use of the military would mark a stunning federal intervention rarely seen in modern American history.

Amid the protests, nine states and the District of Columbia held presidential primaries that tested the nation’s ability to run elections while balancing a pandemic and sweeping social unrest. Joe Biden won hundreds of more delegates and was on the cusp of formally securing the Democratic presidential nomination.

Also Tuesday, Minnesota opened an investigation into whether the Minneapolis Police Department has a pattern of discrimination against minorities.