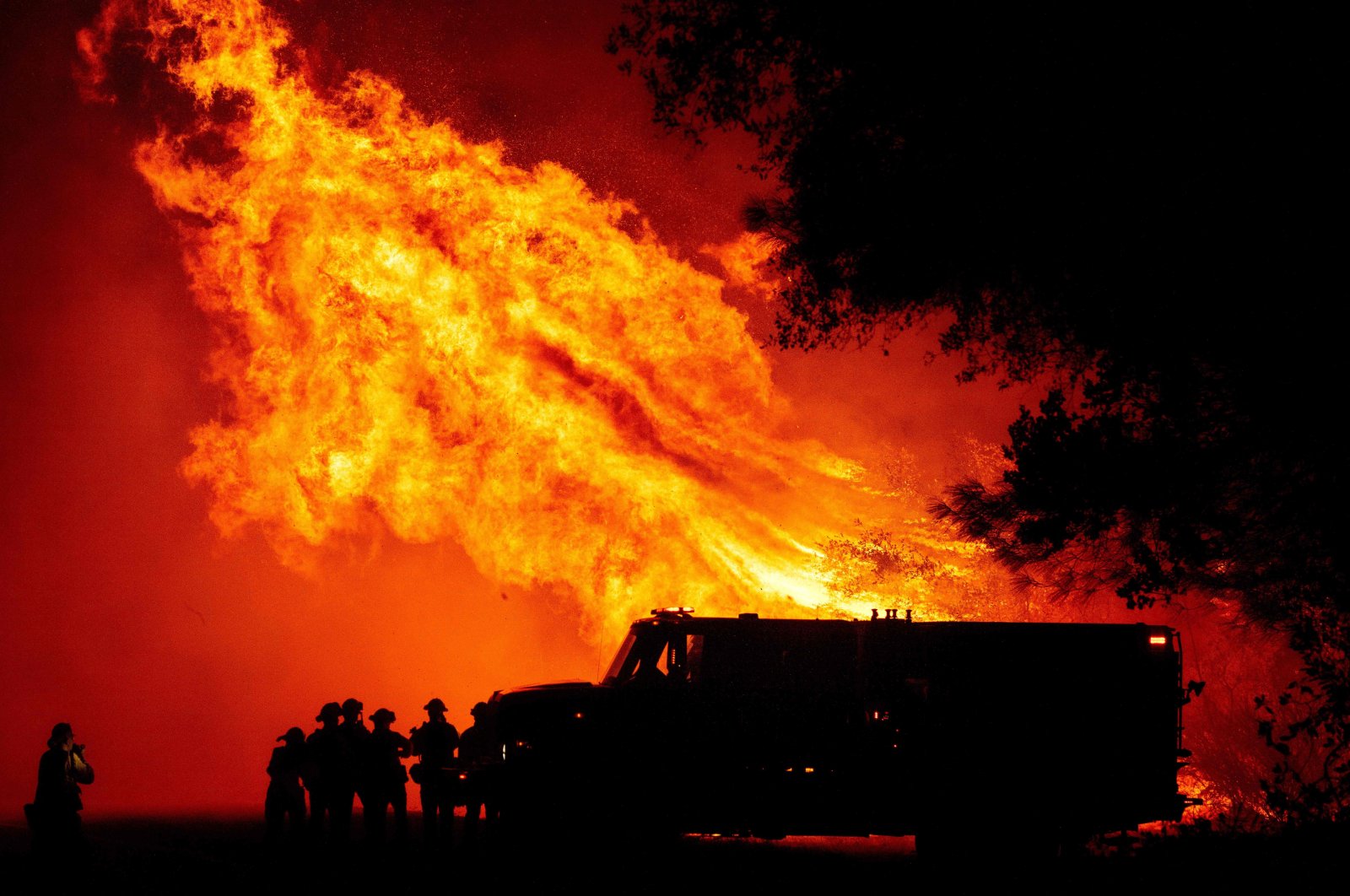 Three people died in a wind-whipped Northern California wildfire that has forced thousands of people from their homes while carving a 25-mile (40.2-kilometer) path of destruction through mountainous terrain and parched foothills, authorities said Wednesday.

California Highway Patrol Officer Ben Draper told the Bay Area News Group that one person was found in a car and apparently had been trying to escape the flames.

Hundreds, if not thousands, of homes and other buildings, are believed to have been damaged or destroyed by the blaze northeast of San Francisco, fire officials said at an evening news conference.

The fire has also threatened Paradise, a town devastated just two years ago by the deadliest blaze in state history that prompted a deadly traffic jam as panicked residents tried to escape.

The North Complex fire was one of more than two dozen burning in California, including three of the five largest ever in the state. Other wildfires charred huge swaths of the West amid gusty, dry conditions. Forecasters said some weather relief was in sight and could help firefighters overwhelmed by the blazes.

In Washington, more acres burned in a single day than firefighters usually see all year. Fires also forced people to flee homes in Oregon and Idaho. A blast of polar air helped slow wildfires in Colorado and Montana.

Since the middle of August, fires in California have killed 11 people, destroyed more than 3,600 structures, burned old-growth redwoods, charred chaparral and forced evacuations in communities near the coast, in wine country and along the Sierra Nevada.

Thick smoke Wednesday choked much of the state and cast an eerie orange hue across the sky as thousands of people in communities near Oroville were ordered to evacuate.

Daniel Swain, a climate scientist at the University of California, Los Angeles, conservatively estimated the fire had burned about 400 square miles (1,036 square kilometers) in 24 hours.

"The unbelievable rates of spread now being observed on these fires – it is historically unprecedented,” Swain tweeted.

The U.S. Forest Service, which had taken the unprecedented measure of closing eight national forests in Southern California earlier in the week, ordered all 18 of its forests in the state closed Wednesday for public safety.

The fire raging outside Oroville, 125 miles (200 kilometers) northeast of San Francisco, jumped the middle fork of the Feather River on Tuesday and, driven by 45 mph (72 km/h) winds, leaped into a canopy of pines and burned all the way to Lake Oroville, about 25 miles, said Jake Cagle, one of the fire chiefs involved.

The fire had been 62 square miles and 50% contained before it grew more than sixfold.

Firefighters were focused on saving lives and homes instead of trying to halt the fire’s advance, Cagle said.

The fire tore into several hamlets along the river and near Lake Oroville, leveling countless homes and other buildings, said Daniel Berlant, a spokesperson with the California Department of Forestry and Fire Protection.

"We know that the fire was burning incredibly rapidly into Berry Creek and did do a lot of destruction,” Berlant said.

In Paradise, where 85 people lost their lives and nearly 19,000 buildings were destroyed, the sky turned from black to cherry red and ash carried on strong winds rained down in a scene reminiscent from the fateful morning of Nov. 8, 2018, former Mayor Steve "Woody” Culleton said.

"It was extremely frightening and ugly,” Culleton said. "Everybody has PTSD and what not, so it triggered everybody and caused terror and panic.”

A power shutoff to prevent electric lines from sparking wildfires – the cause of the Paradise fire – prevented people from getting up-to-date information by internet, TV or their home phones, Culleton said. Many of the residents decided to leave and created a traffic jam leading out of town, another scary reminder of the bottleneck where several residents died two years ago.

On Tuesday, flames overtook 14 firefighters who had to deploy last-resort emergency shelters trying to protect a mountaintop fire station above Big Sur on California’s central coast. Three suffered burns and smoke inhalation. However, one firefighter who was in critical condition was upgraded to stable condition and the other two were treated and released from a Fresno hospital, the U.S. Forest Service said.

That fire, which had doubled overnight Tuesday and burned terrain that hadn’t seen fire in 40 years, destroyed an office, two fire engines, barracks and all the firefighters’ personal belongings inside.

In Southern California, fires burned in Los Angeles, San Bernardino and San Diego counties. People in foothill communities east of Los Angeles were warned to be ready to flee, but the region’s notorious Santa Ana winds were weaker than predicted.

"We’re encouraged that the wind activity appears to be dying down,” Gov. Gavin Newsom said. "The rest of the week looks a little more favorable.”

California has set a record with nearly 2.5 million acres (1 million hectares) burned already this year, and historically the worst of the wildfire season doesn’t begin until fall.

Pacific Gas & Electric deployed more than 3,000 employees Wednesday to inspect power lines before restoring energy to about 167,000 customers whose electricity was turned off to prevent fires from being started by wind-damaged wires. The utility had restored power to about 85% of those customers by evening.

Only a very small number of customers had the power turned off in Southern California.