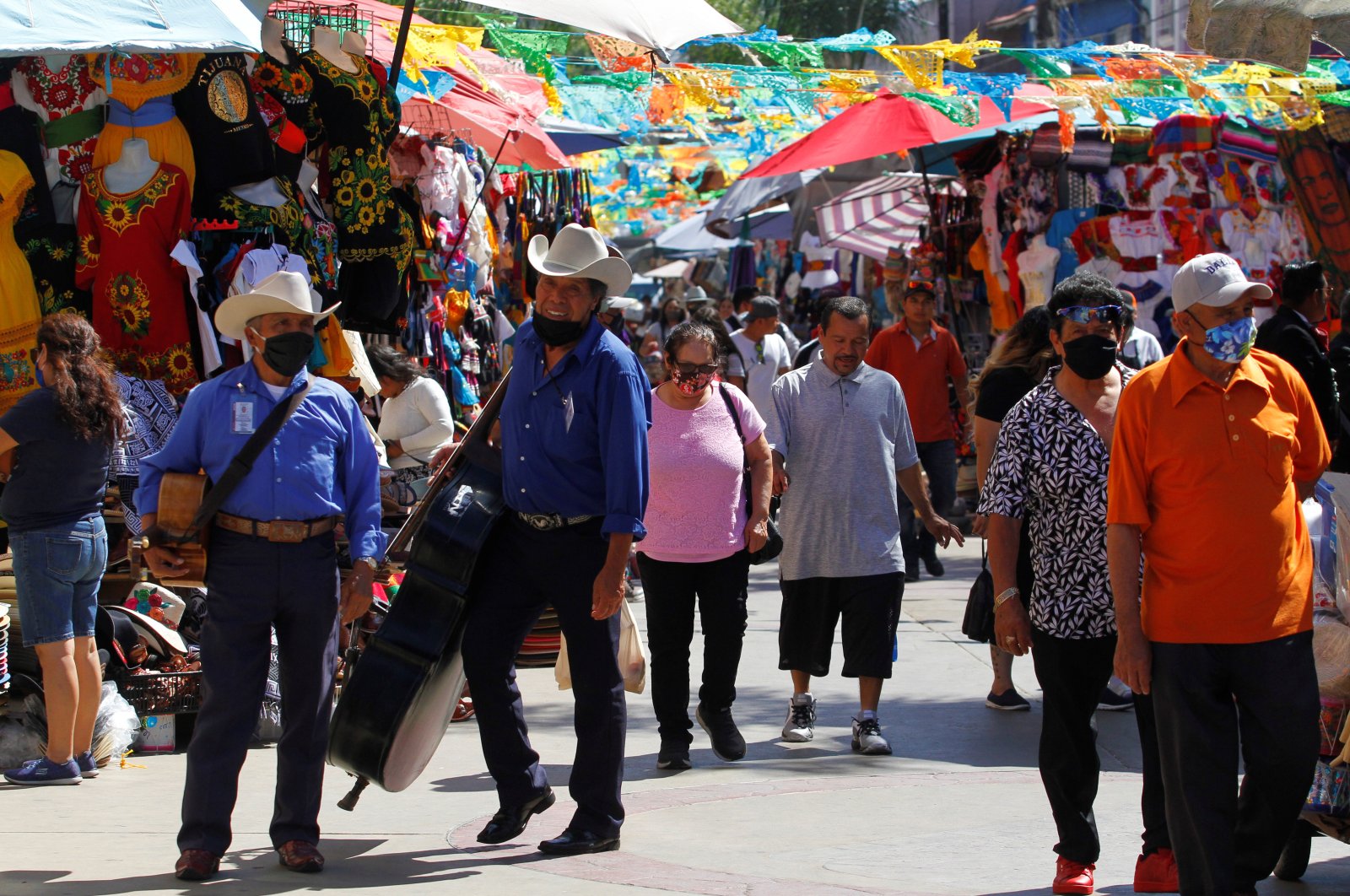 Traditional musicians are seen next to residents and tourists at a souvenir market, Tijuana, Mexico, July 4, 2020. (REUTERS Photo)
by DAILY SABAH WITH AGENCIES Jul 05, 2020 1:27 pm

As the coronavirus pandemic accelerates in many continents, the World Health Organization (WHO) reported Saturday with the highest single-day increase with more than 212,000 new cases globally. The biggest outbursts were recorded in the Americas as Latin American countries overtook Europe in their number of infections.

The WHO reported over 10.9 million confirmed COVID-19 cases and 523,011 deaths, including 5,134 in the last 24 hours. Almost half of the new cases were recorded in the U.S. and Brazil, with 53,213 and 48,105 new infections respectively. Even Europe, which has largely been celebrating its reopening, had some setbacks as authorities placed some 200,000 people back under lockdown in Spain after a spike in infections, underlining how easily hard-won progress can be reversed.

Mexico's death toll from the coronavirus rose by over 30,000 Saturday, propelling it past France to become the country with the fifth-highest number of fatalities, according to the health ministry. "As of today, 30,366 people who had tested positive for COVID-19 in the laboratory have died," Jose Luis Alomia, the national director of the Department of Epidemiology of the Ministry of Health, told a press conference.

The Latin American country, with its 127 million inhabitants, surpassed Spain in the number of deaths last Wednesday. In the Americas, now the epicenter of the pandemic, it is the third-most affected country after the U.S. and Brazil.

The U.S. dipped under 50,000 new coronavirus cases for the first time in four days, according to a tally by Johns Hopkins University, but experts fear Independence Day weekend celebrations will act like rocket fuel for the nation’s surging outbreak.

The U.S. has the most infections and virus-related deaths in the world, with 2.8 million cases and nearly 130,000 dead, according to the university. Experts say the true toll of the pandemic is significantly higher, due to people who died before they were tested and missed mild cases. To show just how steep the current infection curve is in the U.S., the country was reporting under 20,000 new infections a day as recently as June 15.

Elsewhere in the world, with 24,850 new cases and 613 deaths over the last 24 hours, India Sunday saw its biggest surge in COVID-19 cases. The country's tally of infections rose to 673,165 as the death toll zoomed to 19,268, according to the Health Ministry data. India is now only 800 cases behind Russia, the third worst-hit country globally.

In the Middle East, Saudi Arabia's coronavirus infections have passed 200,000 and neighboring United Arab Emirates 50,000, with the number of new cases climbing after the Arab world's two largest economies fully lifted curfews last month. Restrictions had been in place in both countries since mid-March and their gradual lifting has allowed commercial businesses and public venues to reopen. Other Gulf nations have also moved to ease restrictions, although Kuwait has maintained a partial curfew and Qatar, Bahrain and Oman did not impose one at all.

Saudi Arabia, which has the highest count among the six Gulf states, reported more than 4,100 cases on Friday and Saturday to take its total to 205,929, with 1,858 deaths. The daily tally first rose above 4,000 in mid-June but had dipped.

Qatar, which has the second-highest regional infection rate, has seen its daily case numbers fall from a peak of more than 2,000 in late May to around 500 on Saturday, bringing it to nearly 100,000 cases in total.