Ammonium nitrate: Chemical behind many deaths in accidents, terrorist attacks 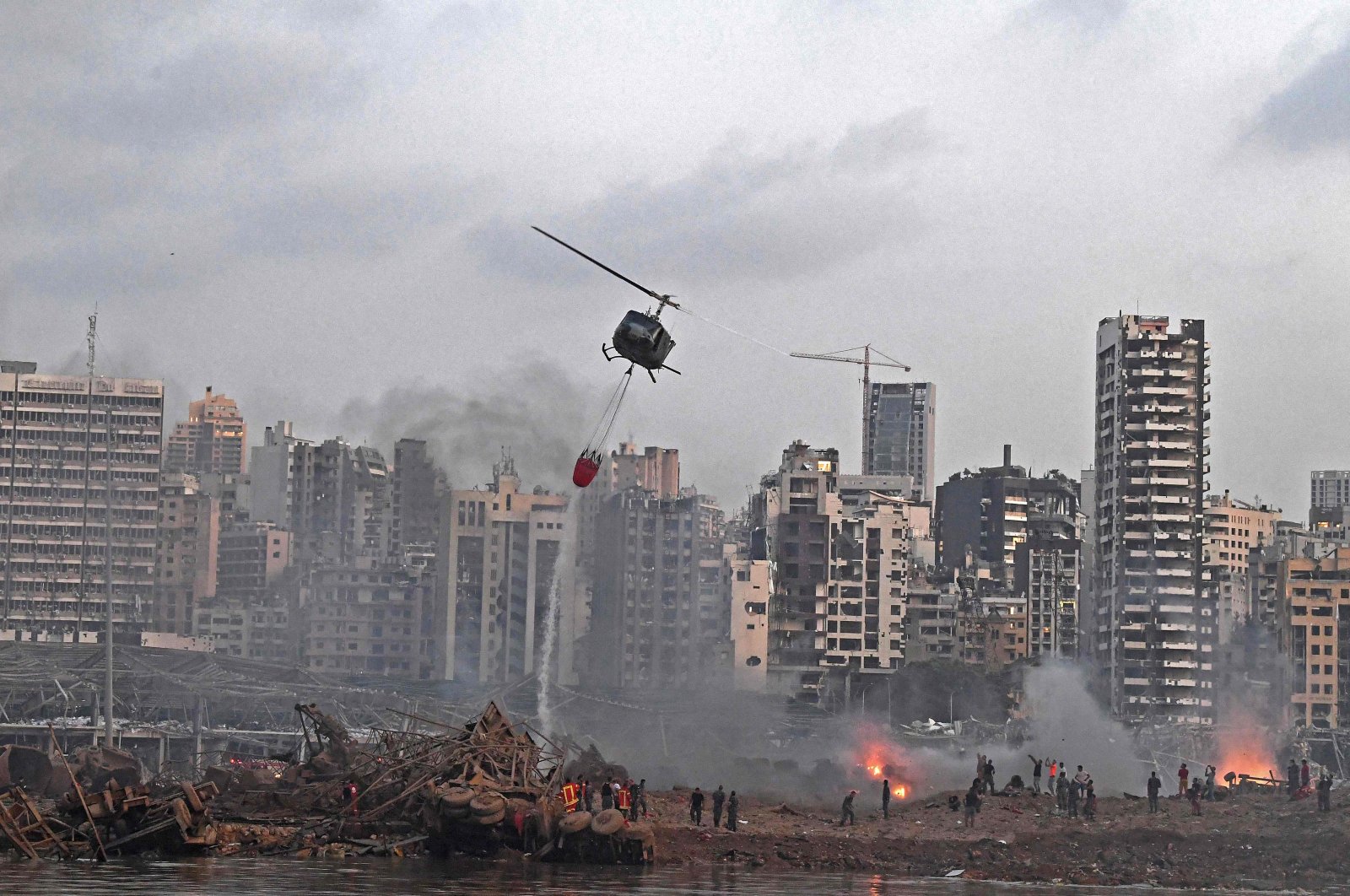 A helicopter is dispatched to put out multiple fires at the scene of the massive explosion that hit a port in Beirut, Lebanon, Aug. 4, 2020. (AFP Photo)
by Daily Sabah with AFP Aug 05, 2020 12:53 pm
RECOMMENDED

Ammonium nitrate, which Lebanese authorities have said caused the devastating Beirut blast, is an odorless crystalline substance commonly used as a fertilizer that has been the cause of numerous industrial explosions over the decades and was used in several terrorist attacks.

Lebanese Prime Minister Hassan Diab said 2,750 metric tons of ammonium nitrate that had been stored for years in a Beirut portside warehouse had blown up, killing dozens of people and causing widespread damage to the Lebanese capital.

When combined with fuel oils, ammonium nitrate creates a potent explosive widely used in the construction industry but also by insurgent groups such as the Taliban for improvised explosives.

In 2004, a freight train carrying ammonium nitrate exploded in the North Korean railway town of Ryongchon, about 20 kilometers (12.4 miles) from the border with China. North Korea's official casualty reports said the accident killed 54 people and injured 1,249 others. However, the Red Cross reported more than 160 deaths and about 1,300 injuries.

Three years later, 40 people were killed and dozens others injured when a truck carrying explosives blew up after crashing into a pickup truck and catching fire in Monclova, northern Mexico. The wreckage caught fire, and the ammonium nitrate exploded, sending a ball of fire into the sky that consumed nearby cars and left a 3-by-12-meter (10-by-40-foot) crater in the road.

In August 2015, a massive explosion at a chemical warehouse in Tianjin, China killed 173 people. The warehouse, designed to house dangerous and toxic chemicals, was storing mainly ammonium nitrate, potassium nitrate and calcium carbide at the time, according to police. The dead included 99 firefighters and 11 police officers, who were not informed of the presence of the 800 tons of ammonium nitrate.

Two tons of ammonium nitrate were used to create the bomb in the 1995 Oklahoma City attack that destroyed a U.S. federal building, leaving 168 people dead. It remains the deadliest act of domestic terrorism in the United States.

Former U.S. soldier Timothy McVeigh was convicted in 1997 on 11 counts of murder, conspiracy and using a weapon of mass destruction in the explosion. He was executed in 2001. Another ex-soldier, Terry Nichols, was convicted on similar charges for his role in the bombing and sentenced to life without parole after the jury deadlocked on the death penalty. Both men were motivated by contempt for government, the hatred sharpened by the 1993 federal raid on the Branch Davidian compound in Waco, Texas.

In 2011, right-wing terrorist Anders Behring Breivik used ammonium nitrate for his bomb and shooting attacks in Oslo and at a Labour Party youth camp near the capital. Eight people from Breivik's 77 victims were killed by the bomb he had planted in Oslo's government quarter.

That same year, a powerful ammonium nitrate bomb placed in a briefcase outside the High Court in New Delhi killed 15 people and wounded 76 in an attack Indian authorities said was claimed by a South Asian militant group linked to al-Qaida.

In 2013, 18 people were killed in a bombing attack in southern India's Hyderabad. An investigation revealed that the two bombs that were used were packed with ammonium nitrate as well as huge amounts of iron nails and bolts, which were held together with a copper string.

'Indispensable' in agriculture and construction

In agriculture, ammonium nitrate fertilizer is applied in granule form and quickly dissolves under moisture, allowing nitrogen – which is key to plant growth – to be released into the soil.

However, under normal storage conditions and without very high heat, it is difficult to ignite ammonium nitrate, Jimmie Oxley, a chemistry professor at the University of Rhode Island, told Agence France-Presse (AFP).

"If you look at the video (of the Beirut explosion), you saw the black smoke, you saw the red smoke – that was an incomplete reaction," she said.

"I am assuming that there was a small explosion that instigated the reaction of the ammonium nitrate – whether that small explosion was an accident or something on purpose I haven't heard yet."

That's because ammonium nitrate is an oxidizer – it intensifies combustion and allows other substances to ignite more readily but is not itself very combustible.

For these reasons, there are generally very strict rules about where it can be stored: For example, it must be kept away from fuels and sources of heat.

In the U.S., regulations were tightened significantly after the Oklahoma City attack.

Under the Chemical Facility Anti-Terrorism Standards, for example, facilities that store more than 2,000 pounds (900 kilograms) of ammonium nitrate are subject to inspections.

Despite its dangers, Oxley said legitimate uses of ammonium nitrate in agriculture and construction have made it indispensable.

"We wouldn't have this modern world without explosives, and we wouldn't feed the population we have today without ammonium nitrate fertilizer," she said.

"We need ammonium nitrate, we just need to pay good attention to what we're doing with it."