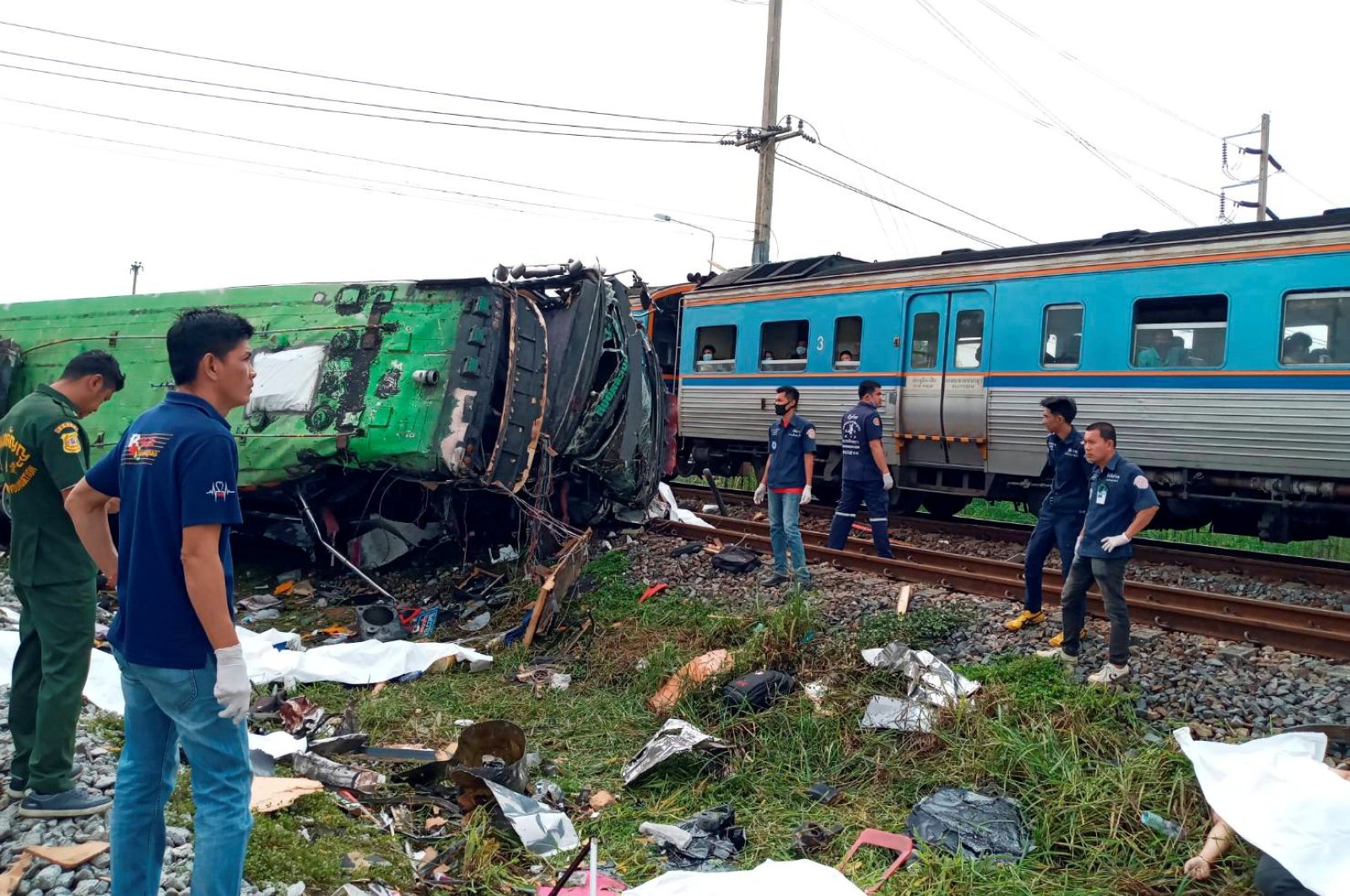 At least 18 people were killed and more than 40 injured in Thailand Sunday when a freight train crashed into a bus taking passengers to a religious ceremony, officials said.

The morning collision, around 50 kilometers (30 miles) east of the capital, Bangkok, toppled the bus and sheared off part of its roof.

"Four are in critical condition and eight remain under observation" out of the 23 admitted to her hospital, she told reporters.

By late afternoon, more than 30 passengers who had sustained mild injuries were sent home, said a local police chief.

"The death toll is at 18," he told AFP, adding that "the investigation on the cause of the accident is ongoing."

Footage shared by a government department showed the bus edging from the road onto train tracks before a blue cargo train slammed into its side.

"I was frozen in fear when I saw the crash ... It was a terrible sight," said Pitchitra Thongwichit, 34, who lives close to the tracks.

"All the passengers were moaning and crying for help."

Photos taken by rescue workers showed gnarled metal and debris, with bodies lying by the tracks and belongings scattered around the scene.

Factory worker Samruan Thongdee said he was having breakfast nearby when he heard the crash.

"I called my colleagues to come to help" before the emergency workers arrived, the 57-year-old told AFP. "I managed to drag a woman from the wreckage and helped her up onto the train platform."

Two cranes were brought in the afternoon to lift the bus off the tracks so that police could better assess the carnage.

There were some 60 passengers in the chartered bus traveling from Samut Prakan province to a temple in Chachoengsao, said province governor Maitree Tritilanond.

They were planning to offer yellow robes to monks – a traditional ceremony held within a month of the end of Buddhist Lent, he told reporters.

Thai premier Prayut Chan-O-Cha instructed authorities to investigate the cause of the crash, a government spokesman said in a statement.

Travel throughout the kingdom has been thrown into disarray by a big storm hitting the region, leaving roads in poor conditions and some provinces deluged in shin-high floods.

Deadly accidents are common in Thailand, which regularly tops lists of the world's most lethal roads, with speeding, drunk driving and weak law enforcement all contributing factors.

Thailand has the second-highest traffic fatality rate in the world, according to a 2018 World Health Organization report.

Though a majority of the victims are motorcyclists, bus crashes involving groups of tourists and migrant laborers often grab headlines.

In March 2018, at least 18 people were killed and dozens wounded when a bus carrying domestic tourists in northeastern Thailand swerved off the road and into a tree.