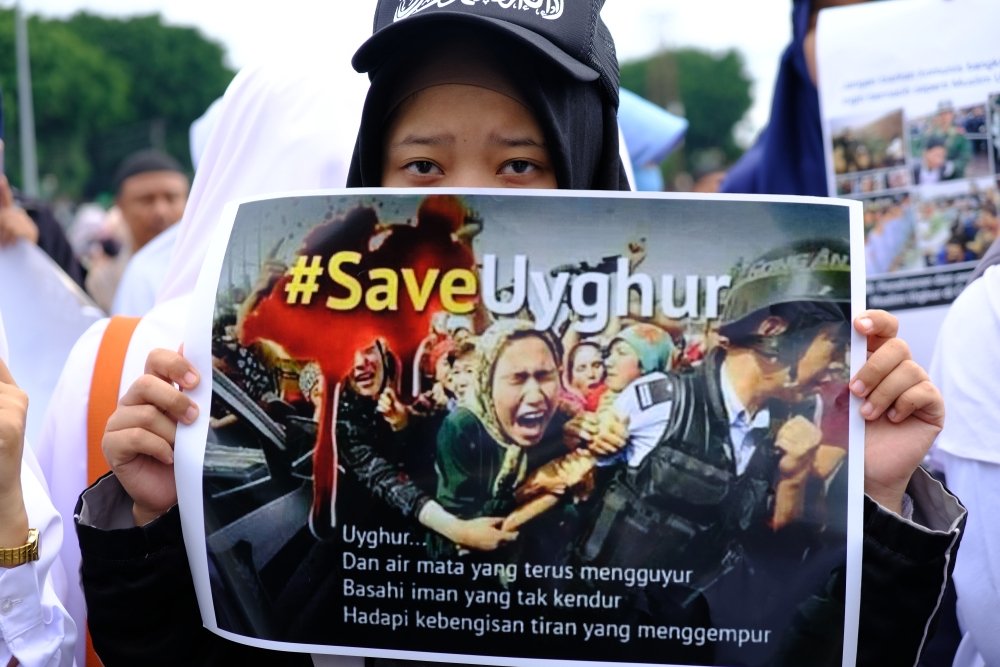 A woman takes part in a protest against China's treatment of Muslim Uyghurs at the Zero Point of the city of Yogyakarta, Indonesia, Dec. 21, 2018. (Shutterstock Photo)
by DAILY SABAH Mar 09, 2021 12:34 pm
RECOMMENDED

An independent report published by U.S.-based Newlines Institute for Strategy and Policy think tank Tuesday asserted that China's alleged crimes against Muslim minorities in its western region of Xinjiang have violated all the provisions of the United Nations Convention on Genocide.

In the report, over 50 global experts in human rights, war crimes and international law said that Beijing "bears state responsibility for an ongoing genocide against the Uyghurs in breach of the Genocide Convention," which draws a clear definition of what constitutes "genocide" and was approved by the United Nations General Assembly (UNGA) in December 1948 by more than 150 countries, including China.

This is the first time that a nongovernmental organization (NGO) has conducted an independent legal analysis of the Xinjiang genocide allegations, including the question of how Beijing might be held accountable for the alleged crimes. While Article II of the convention states that genocide is an attempt to commit acts "with an intent to destroy, in whole or in part, a national, ethnical, racial or religious group," a preliminary copy of the Newlines report, which has been viewed exclusively by CNN, said the Chinese government has fulfilled all criteria with its actions in Xinjiang.

"Given the serious nature of the breaches in question ... this report applies a clear and convincing standard of proof," the report said.

U.N. Genocide Convention lists five actions that can be identified as an act of genocide. It includes killing members of the group, causing serious bodily or mental harm to members of the group, deliberately inflicting conditions of life calculated to bring about its physical destruction in whole or in part, imposing measures intended to prevent births within the group; or forcibly transferring children of the group to another group.

"China's policies and practices targeting Uyghurs in the region must be viewed in their totality, which amounts to an intent to destroy the Uyghurs as a group, in whole or in part," the report claimed.

A separate report published on Feb. 8 by the Essex Court Chambers in London, commissioned by the World Uyghur Congress and the Uyghur Human Rights Project, similarly concluded that a "credible case" of genocide was being brought against the Chinese government.

The convention does not provide specific punishments or penalties for states or governments that decide to commit genocide. But the Newlines report says the other 151 signatories are responsible for the action under the convention.

"China's obligations ... to prevent, punish and not commit genocide are erga omnes, or owed to the international community as a whole," the report added.

According to the U.S. State Department, up to 2 million Uyghurs and other Muslim minorities have been detained in an extensive network of detention centers across the region, where former prisoners say they have been indoctrinated, sexually assaulted and even forcibly sterilized. China denies allegations of human rights violations, saying the centers are necessary to prevent religious extremism and terrorism.