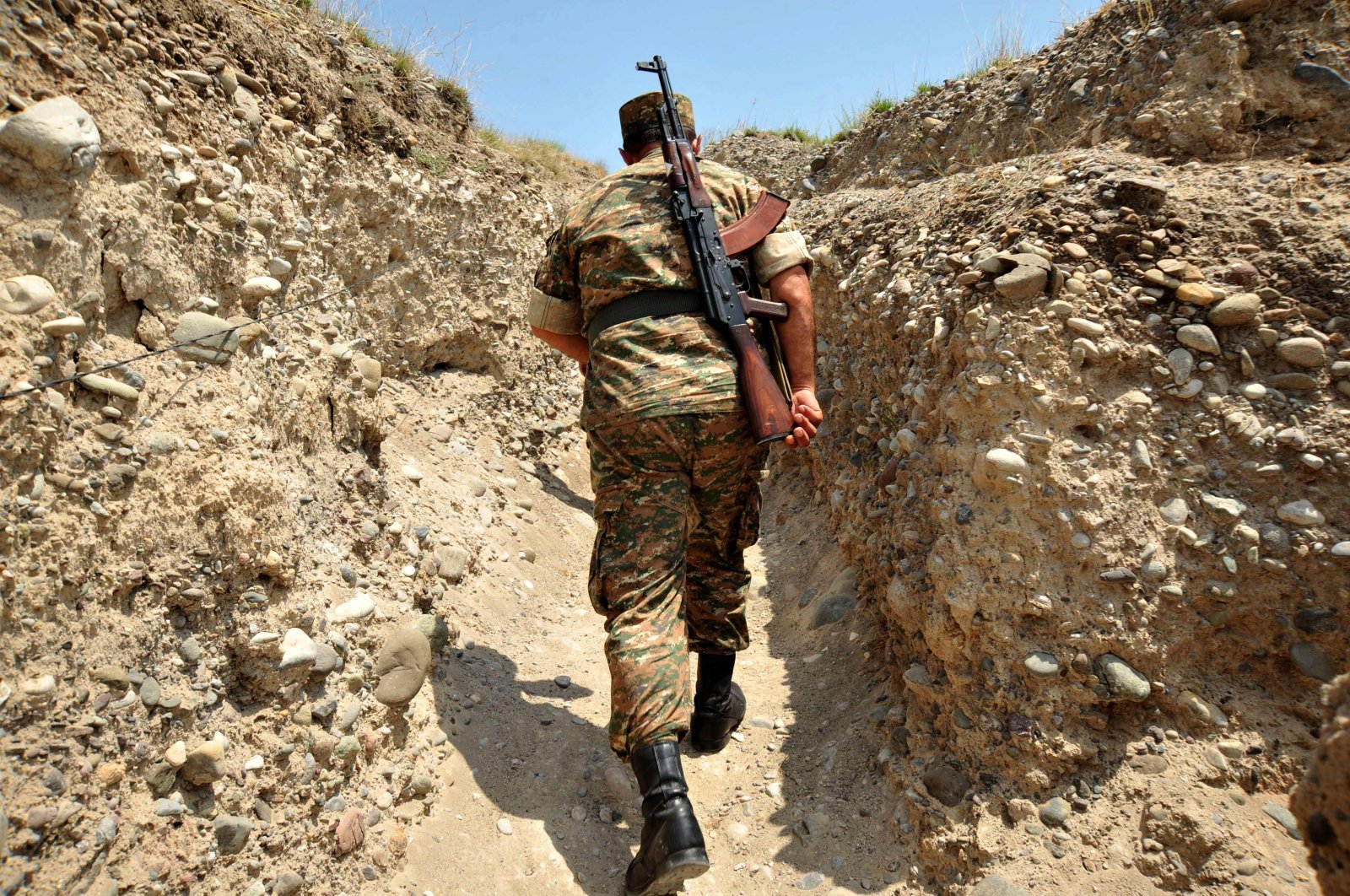 In this file photograph, an Armenian soldier of the self-proclaimed republic of Nagorno-Karabakh walks in a trench at the frontline on the border with Azerbaijan near the town of Martakert, July 11, 2012. (AFP Photo)
by Daily Sabah with Wires Jul 14, 2020 12:56 pm
RECOMMENDED

At least seven Azerbaijani military personnel, including one general and a colonel, were killed in fresh border clashes with Armenia in the northwestern Tovuz region Tuesday.

That brings the total number of Azerbaijani dead to 11 since border clashes on Sunday reignited the simmering Azerbaijan-Armenia territorial conflict.

Valiyev said that during some fierce battles on the border at least 100 Armenian troops were killed and a large number of military equipment destroyed.

"The Azerbaijani army also suffered losses as a result of hostilities," he added.

The administration of Tovuz region also reported that the Armenian Armed Forces killed one civilian in the village of Agdam.

"On July 14, 2020, as a result of Armenia's artillery shelling, a civilian was killed. Armenia fired at our settlements with heavy weapons," it said, adding that as a result civilian infrastructures were severely damaged.

Officials from the Tovuz region called on the international community and OSCE Minsk Group to respond and strongly condemn the Armenian military assault of civilians in Azerbaijan.

Russia on Tuesday urged Armenia and Azerbaijan to show restraint after a deadly escalation in fighting along their shared border.

"We are deeply concerned about the exchange of fire on the Armenian-Azerbaijani border," Kremlin spokesman Dmitry Peskov told reporters, adding that Moscow was calling on "both sides to show restraint".

On Monday Azerbaijan’s ministry of defense said Armenian positions were destroyed by Azerbaijani troops in the Tovuz region on the Azerbaijan-Armenia border on Monday morning after three Azerbaijani soldiers were killed and four were wounded in clashes Sunday.

According to Baku, Azerbaijani forces, with the help of artillery and tanks destroyed a strong point, artillery installations and automotive equipment and killed multiple soldiers in Armenian territory. One more Azerbaijani soldier was killed Monday.

Turkey's Foreign Ministry on Monday strongly condemned the attack carried out by Armenian forces. In a statement, the ministry said the fact that Armenia's action, which marked a new manifestation of its aggressive nationalism, was repelled by Azerbaijan in a concrete indication that aggression would not be left unanswered.

Turkey warned Armenia to respect Azerbaijan's territorial integrity, noting that Ankara will stand with Baku "with all it has."

He called on Armenia to "pull itself together" and said Turkey will always stand beside Azerbaijan with everything it has.

Referring to Armenian aggression as "unacceptable," Çavuşoğlu said: "The Azerbaijani army has done what was necessary and repelled these attacks.”