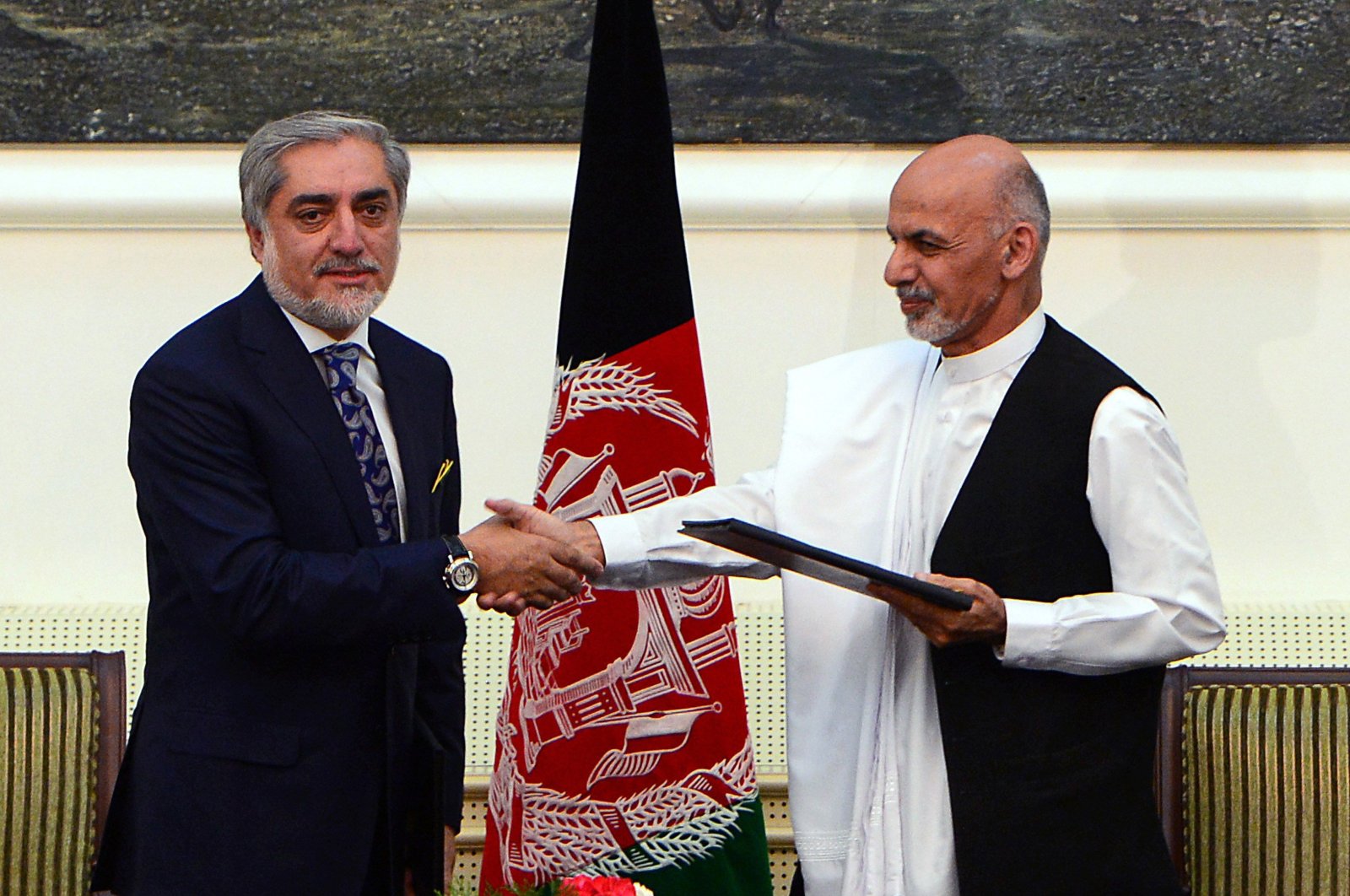 In this file photo, Afghan presidential candidates Abdullah Abdullah (L) and Ashraf Ghani Ahmadzai shake hands after signing a power-sharing agreement at the Presidential Palace in Kabul on Sept. 21, 2014. (AFP Photo)
by Compiled from Wire Services May 17, 2020 1:43 pm
RECOMMENDED

Afghan President Ashraf Ghani and his rival Abdullah Abdullah on Sunday signed a power-sharing deal, ending a bitter monthslong feud that has hampered progress toward peace and plunged the country into a political crisis.

"Doctor Abdullah will lead the National Reconciliation High Commission and members of his team will be included in the cabinet," Sediq Sediqqi, spokesman for Ghani, wrote on Twitter. It means that Abdullah will be leading the peace process with the insurgent Taliban while Ghani leads the country as president.

The breakthrough comes as Afghanistan battles a series of crises, including a rapid spread of the deadly coronavirus and surging violence that saw dozens killed in brutal attacks last week.

Abdullah had disputed the results of September's presidential election, which was carried by Ghani with just above 50% required in the first round, according to official results. Earlier this year, he announced the formation of a parallel government, undermining Ghani's administration just as the U.S. was trying to advance a peace process with the Taliban to end Afghanistan's 19-year war.

The two men, who also contested each other in 2014 elections, had reached a similar deal soon after the elections which saw Abdullah named as chief executive with powers exceeding those of prime minister. The role brought Abdullah a key role in foreign relations and investment, as well as relations with the Taliban.

"Overall both teams have reached an agreement based on which they will have 50% share in the government. The thing that is still under debate right now is about which ministry should go to whom," a source told Reuters before the deal was announced.

Abdullah wants to control a major portfolio such as finance or foreign affairs and while Ghani has not agreed to this, he could offer control of the interior ministry, sources said.

Washington, frustrated by the growing impasse between the two men, even after Secretary of State Mike Pompeo traveled to Kabul to mediate, threatened a $1 billion aid cut if the men could not agree.

It was not immediately clear whether the agreement, if reached, would result in aid being reinstated, but it comes as Afghanistan faces growing fiscal pressures, with tax revenues falling and foreign aid pledges due this year expected to shrink.

Officials say that a deal between the Ghani and Abdullah is crucial to launching peace talks, as Abdullah's camp represents much of the country's northwest. But the talks face a number of stark challenges, as violence in the country increases and a harrowing attack on a Kabul maternity ward this week prompted Ghani to switch the military to an "offensive" stance against insurgent groups.

The Taliban deny involvement in the attack, but the government has remained skeptical and angry at ongoing Taliban attacks against the Afghan military, fraying the momentum for peace talks, which were due to start in March.

U.S. Special Envoy Zalmay Khalilzad said on Friday that a new date for intra-Afghan peace talks was under discussion and he would soon travel to the region and try to encourage a reduction in violence.