Afghan translators for US, NATO forces fear being left behind 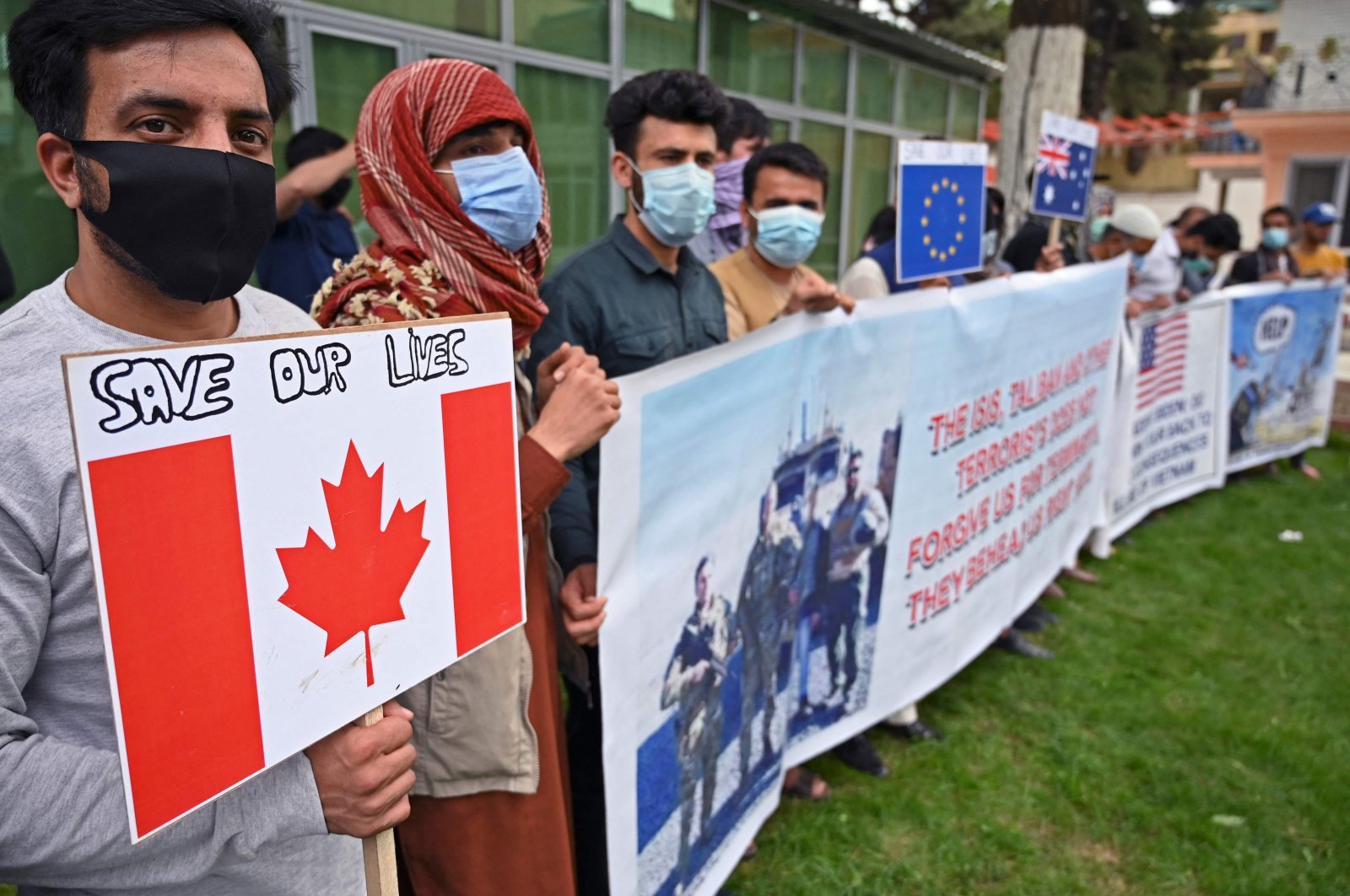 Afghan former interpreters for the U.S. and NATO forces gather during a demonstration in downtown Kabul, on the eve of the beginning of Washington's formal troop withdrawal – although forces have been drawn down for months, Kabul, Afghanistan, April 30, 2021. (AFP Photo)
by French Press Agency - AFP Jun 03, 2021 1:38 pm
RECOMMENDED

Thousands of Afghan translators, who worked for foreign forces, fear for their lives with just weeks to go until the United States and NATO troops complete their withdrawal from the country.

Desperate to leave the country they say embassies have issued thousands of visas to Afghan interpreters and their immediate families, but many have had their applications declined – some for reasons they say were never fully explained. Like thousands of Afghan translators who served with NATO forces, Nazir Ahmad feels threatened as the situation is deteriorating now as foreign forces leave. Afghans who worked for international armed forces face a threatened wave of Taliban reprisals and fear that resettlement plans by alliance members will leave many of them and their relatives still vulnerable.

Ahmad, 35, who is now in the Afghan capital, worked with British forces for two years in the restive southern province of Helmand, and has applied for relocation to the United Kingdom to escape the increased threats to former local staff.

"The insurgents, especially the Taliban, will take revenge and cut off our heads," he said, explaining the they will be viewed as former local staff "spies" and "foreign allies."

Over the past two decades, dozens of Afghan translators have been killed and tortured in targeted assaults by the Taliban. Many more have been injured in attacks on foreign troops during patrols in armored vehicles.

"When an imam is not safe in a mosque or a 10-year-old girl is not safe in her school ... how can we be safe?" asks Omid Mahmoodi, an interpreter attached to U.S. forces between 2018 and 2020. His work in Kabul and the southern Taliban bastion of Kandahar ended after he failed a routine polygraph test and he has since been refused a U.S. visa. Even though scientists agree there is little evidence lie-detector tests are reliably accurate, they are still used by the U.S. – particularly when hiring people in sensitive roles. Campaigners say those who have been dismissed by foreign forces deserve to have their visa cases reconsidered, as the Taliban will treat them all as collaborators. "They are tracking us," Mahmoodi told Agence France-Presse (AFP). "The Taliban will not pardon us. They will kill us and they will behead us."

Britain announced on Monday that it would accelerate relocation for its Afghan staff who worked with the military, offering priority to any current or former locally employed staff deemed at risk. The U.K. has relocated 1,360 locally employed Afghan staff throughout the whole of the 20-year conflict and says more than 3,000 Afghans are expected to be resettled under the accelerated plans. But Ahmad's contract with the British Army was terminated in 2012, for an alleged security breach, making his right to relocation to the U.K. uncertain. The government says that every dismissal during the conflict was valid and cases can only be reviewed in exceptional circumstances.

Those who were dismissed for minor offenses can be considered for relocation with the presumption of approval, but others who are deemed a security threat will continue to be excluded, it says.

"They fired me while on a patrol with British forces for carrying an old Nokia phone that had no camera," Ahmad said, adding that friends had been sacked for low-level infractions like arriving late for work. British government figures show that 1,010 interpreters – roughly a third of all those employed in the period – were dismissed between 2001 and 2014. Translators like Ahmad, who said he had routinely risked his life with British forces, say the Taliban do not consider why the staff was dismissed. "We put our life in danger," he said. "Now we are seen as infidels looking for British citizenship."

Retired Col. Simon Diggins, the former British attache in Kabul and now a campaigner for the Sulha Alliance for Afghan interpreters, said the "clock was ticking" and questioned if Afghan translators could be relocated in the remaining time. He said mistakes made in the handling of rejected applications – including a fire that destroyed records at Britain's sprawling Camp Bastion base in Helmand in 2011 – showed that the management of locally employed staff was "unacceptably poor."

There is still a lack of detail on whether sacked staff will be relocated, he said, adding that it was "not unreasonable to demand a fair, transparent, urgent and independent review of the cases of all those dismissed."

Visas for repatriation to the United States for former local staff have dried up in recent years. Some U.S. officials have argued that extremists posing as interpreters use the scheme to enter the country.

A U.S. embassy spokesperson in Kabul said there were approximately 18,000 Afghan applicants still in the country who had applied for a U.S. Special Immigrant Visa (SIV).

The backlog is roughly equivalent to the total number of Afghan workers who received visas in nearly two decades of conflict, according to a report by Brown University in April.

Omar, who asked that only his first name be used to protect his identity, worked for the U.S. Treasury Department in Afghanistan between 2002 and 2009, and then in the visa section at the U.S. embassy from 2010 to 2012. So far, his application to go to the U.S. has not been approved. "I'm left behind and my life is now at risk," he said, wearing a scarf over his head and a mask so that he could not be recognized. He said that most of his local colleagues at the time have already gone and have settled in the U.S., but his contract had been terminated after he'd failed a polygraph test.

"I'm worried for my life and for the fate of my children. If anything happens to me, there is no breadwinner for my family," he said.

U.S. charge d'affaires in Kabul Ross Wilson said Washington "recognise(s) the debt that we owe to those who put their lives at risk on behalf of the United States," and described dealing with the backlog of applications as a "moral obligation."

Officials are speeding up the evaluation process of SIV applications "as quickly as we possibly can," he added. For local staff like Omar, however, the final push by U.S. officials may already be too late.

He considered going to Europe on his own to escape the Taliban but the coronavirus pandemic made travel impossible. "I regret working for the US in Afghanistan," he said. "It was the biggest mistake of my life."

'The French army has betrayed us'

At a protest in Kabul last week, 32-year-old Waheedullah Hanifi said French officials turned down his bid for asylum after telling him they did not believe he was in danger, and he has not heard the outcome of an appeal filed in 2019. He worked with the French military between 2010 and 2012, when Paris pulled out its combat troops. "We were the voice ... for the French troops in Afghanistan and now they have left us to the Taliban," said the father of two. He is now terrified about being hunted down. "If I stay in the country, there is no chance of survival for me. The French army has betrayed us."