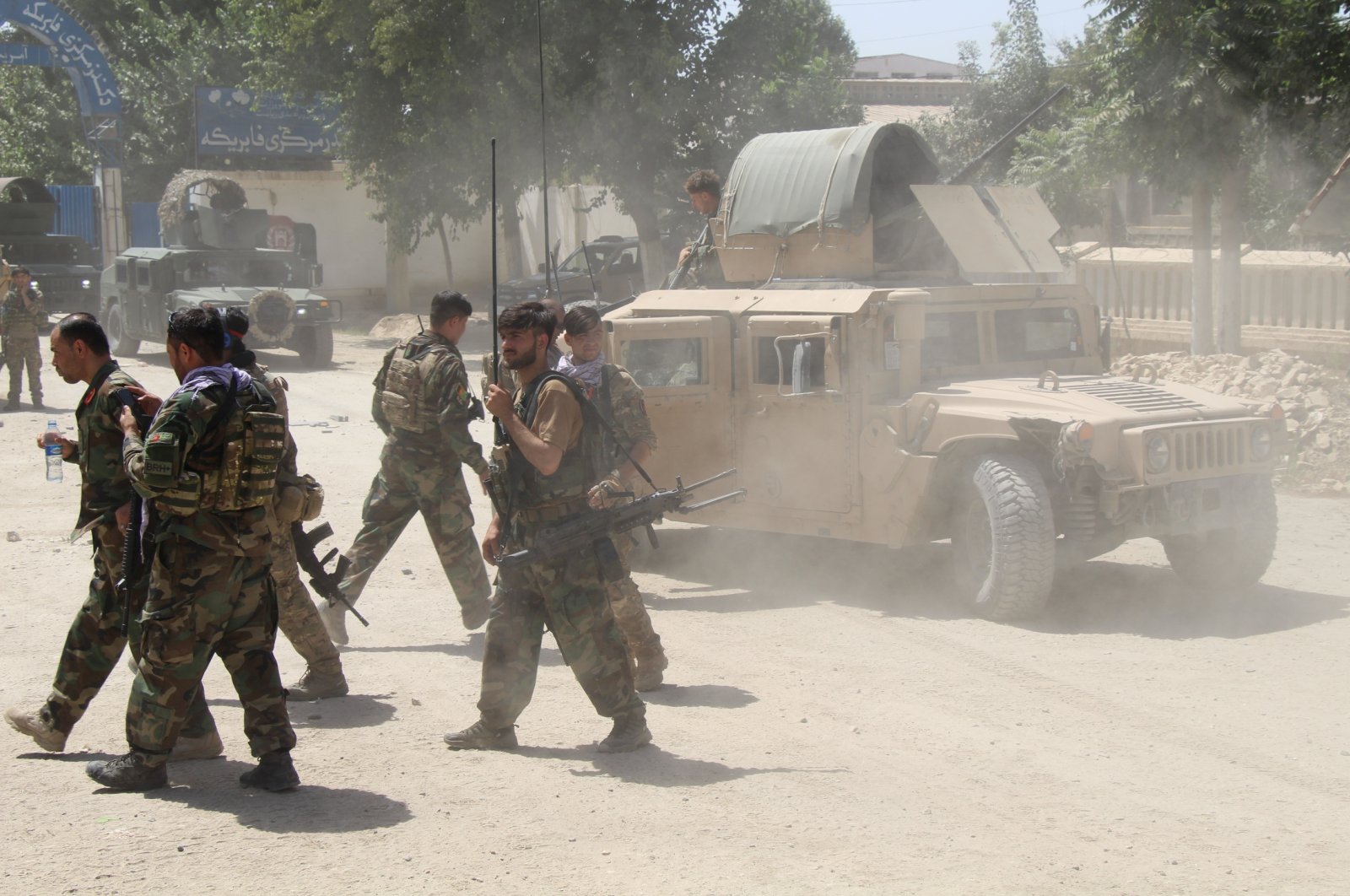 Afghan commando forces move about at the site of a battlefield where they clashed with Taliban insurgents, in Kunduz province, Afghanistan, June 22, 2021. (Reuters Photo)
by Agencies Jun 22, 2021 4:03 pm
RECOMMENDED

Afghan security forces killed at least 50 Taliban fighters in a western province near the border with Iran, officials said Tuesday, while insurgents captured the main border crossing with Tajikistan.

A spokesperson for the Herat governor, Jailani Farhad, told Anadolu Agency (AA) that dozens of Taliban planned to storm Pashtun Zarghun district with an explosive-laden vehicle. However, Afghan forces targeted them with an airstrike before they could carry out their plan.

"Intelligence reports suggest that at least 50 armed Taliban insurgents were killed and a number of others injured in this raid," he said.

In a series of tweets on Tuesday, the Defense Ministry claimed to have killed nearly 300 insurgents in counterterrorism offensives in the past 24 hours.

For their part, the Taliban captured Afghanistan's main border crossing with Tajikistan, with security forces abandoning their posts and some fleeing across the frontier.

In the far north of Afghanistan, the seizure of Shir Khan Bandar, about 50 kilometers (30 miles) from Kunduz city, is the most significant gain for the Taliban since the U.S. began the final stage of its troop withdrawal in May.

"Unfortunately this morning and after an hour of fighting, the Taliban captured Shir Khan port and the town and all the border check posts with Tajikistan," said Kunduz provincial council member Khaliddin Hakmi.

Separately, an army officer told Agency France-Presse (AFP): "We were forced to leave all check posts ... and some of our soldiers crossed the border into Tajikistan.

"By the morning, (Taliban fighters) were everywhere, hundreds of them," he added on condition of anonymity.

Taliban spokesperson Zabihullah Mujahid confirmed the insurgents had seized the crossing across the Pyanj River.

"Our Mujahideen are in full control of Shir Khan Bandar and all the border crossings with Tajikistan in Kunduz," he told AFP.

Amruddin Wali, another provincial council member, said officials "lost contact" with the area on Monday night. The crossing is marked by a 700-meter (2,297-foot) U.S.-funded bridge that opened in 2007 with the aim of boosting trade between the Central Asian neighbors.

It is a sprawling dry port capable of handling up to 1,000 vehicles a day.

"There were 150 trucks loaded with goods in Shir Khan Bandar when it fell and we don't know what's happened to them," said Massoud Wahdat, a spokesperson for the Kunduz provincial chamber of commerce and industries. "It would be a huge financial loss."

Fierce fighting has raged across Kunduz province over the past few days, with the Taliban and Afghan forces engaged in battles Monday on the outskirts of Kunduz city itself.

The Taliban have taken up positions on highways that connect the city to neighboring provinces, officials said. The Taliban have repeatedly attempted to capture the city and held it briefly twice before – in September 2015, and again a year later. With a significant population of Pashtun, Kunduz had been a stronghold of the Taliban before they seized power in the 1990s.

The city's location makes it a key transit point for economic and trade exchanges with Tajikistan. Since early May, the Taliban have launched major offensives targeting government forces across the rugged countryside, and claim to have seized at least 87 of the country's 421 districts.

Many of their claims are disputed by the government, and independent verification is difficult – especially in areas that frequently change hands. Afghan government forces, however, said they would soon launch a massive offensive to retake lost territory.

"The central command is in full control and all security forces and the military resources have been mobilized against the enemy," Gen. Ajmal Shinwari, spokesperson for security forces told reporters. "You will soon witness our advances across the country."