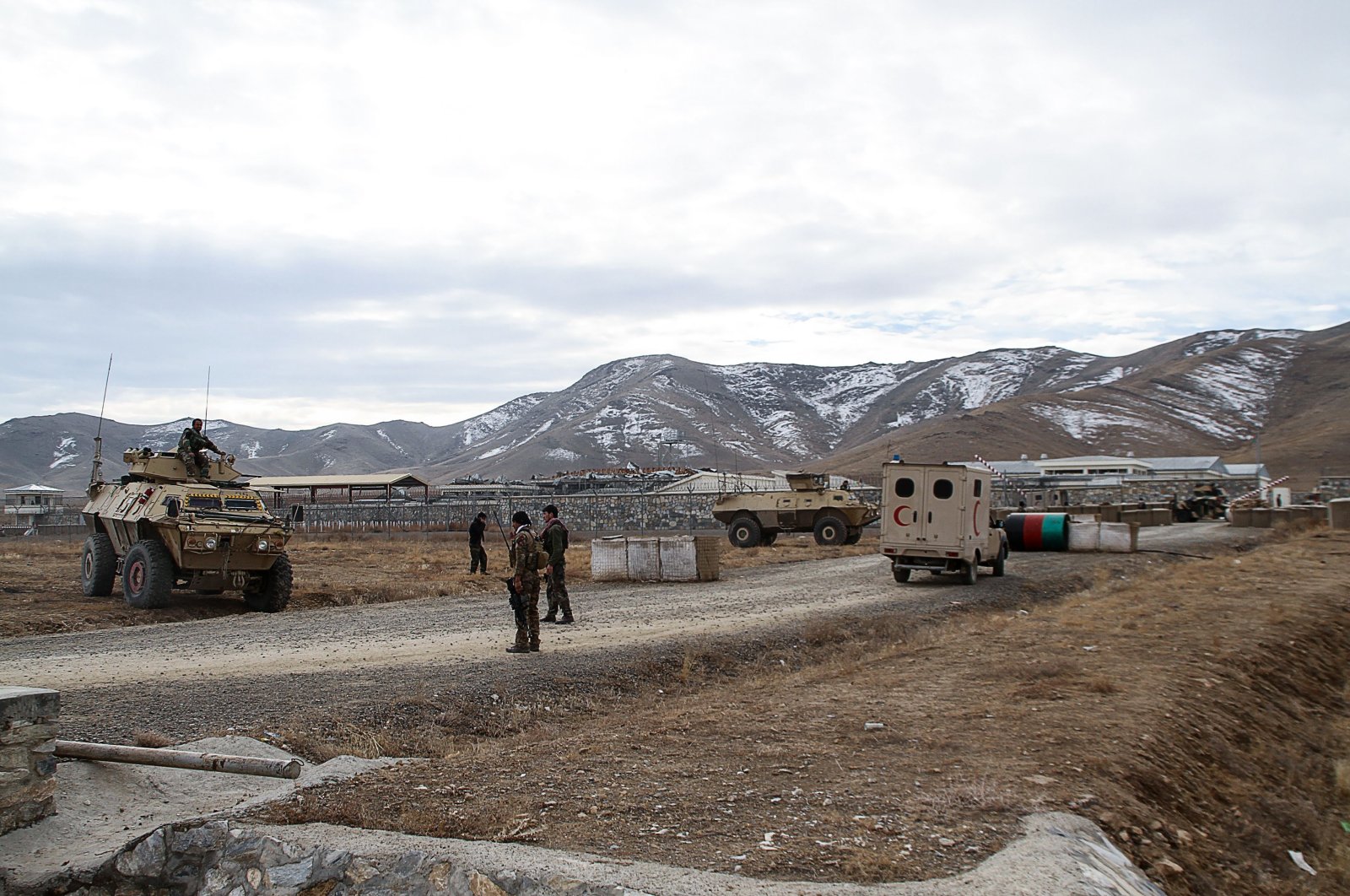 Security personnel are seen after a suicide car bomber struck an army base on the outskirts of Ghazni province on Nov. 29, 2020. (AFP Photo)
by Agencies Dec 02, 2020 3:29 pm
RECOMMENDED

The Afghan government and Taliban representatives said on Wednesday they had reached a preliminary deal to press on with peace talks, their first written agreement in 19 years of war and a move welcomed by the United Nations and Washington.

The agreement lays out the way forward for further discussion and is considered a breakthrough as it will allow negotiators to move on to more substantive issues, including cease-fire talks. This is the first time the warring sides have both directly engaged in talks since a landmark troop withdrawal deal was signed in February by the insurgents and Washington.

"The procedure including its preamble of the negotiation has been finalized, and from now on, the negotiation will begin on the agenda," Nader Nadery, a member of the Afghan government's negotiating team, told Reuters. The Taliban spokesperson confirmed the news on Twitter.

The agreement comes after months of discussions in Doha, the capital of Qatar, in negotiations encouraged by the United States. In Afghanistan, the two sides are still at war, with Taliban attacks on government forces continuing unabated.

U.S. Special Representative for Afghan Reconciliation Zalmay Khalilzad said that the two sides had agreed on a "three-page agreement codifying rules and procedures for their negotiations on a political road map and a comprehensive cease-fire".

"This agreement demonstrates that the negotiating parties can agree on tough issues," he wrote on Twitter.

There has been a sharp rise in violence this year and a surge of attacks by the Taliban against Afghanistan's beleaguered security forces since the start of peace talks in September, in addition to the deadly attacks last month claimed by the Daesh terrorist group. Violence has also surged in Kabul in recent weeks, with more than 50 people killed in two assaults on educational centers and a rocket attack. The three Kabul attacks were claimed by Daesh, but Afghan officials blamed the Taliban, who denied any involvement, according to Agence France-Presse (AFP).

Taliban insurgents have refused to agree to a cease-fire during the preliminary stages of talks, despite calls from Western capitals and global bodies, saying it would only do so once there is an agreement on the way the talks will proceed.

U.N. envoy to Afghanistan Deborah Lyons welcomed the "positive development" on Twitter, adding that "this breakthrough should be a springboard to reach the peace wanted by all Afghans."

Last month, an agreement reached between the Taliban and government negotiators was held up at the last minute after the insurgents balked at the document's preamble because it mentioned the Afghan government by name.

The Taliban refused to refer to the Afghan negotiating team as representatives of the Afghan government, as they contest the legitimacy of the administration led by President Ashraf Ghani, which they see as a puppet of the United States.

Under a February deal, foreign forces are to leave Afghanistan by May 2021 in exchange for counterterrorism guarantees from the Taliban, including negotiating a permanent cease-fire and a power-sharing formula with the Afghan government. The U.S. plans to withdraw an estimated 2,500 troops before the middle of January, leaving about 2,000 soldiers in Afghanistan in America’s longest war. Afghan officials have expressed concerns that a rapid reduction in American troops could strengthen the negotiating position of the Taliban.