Afghans left behind by UK killed by Taliban: Whistleblower 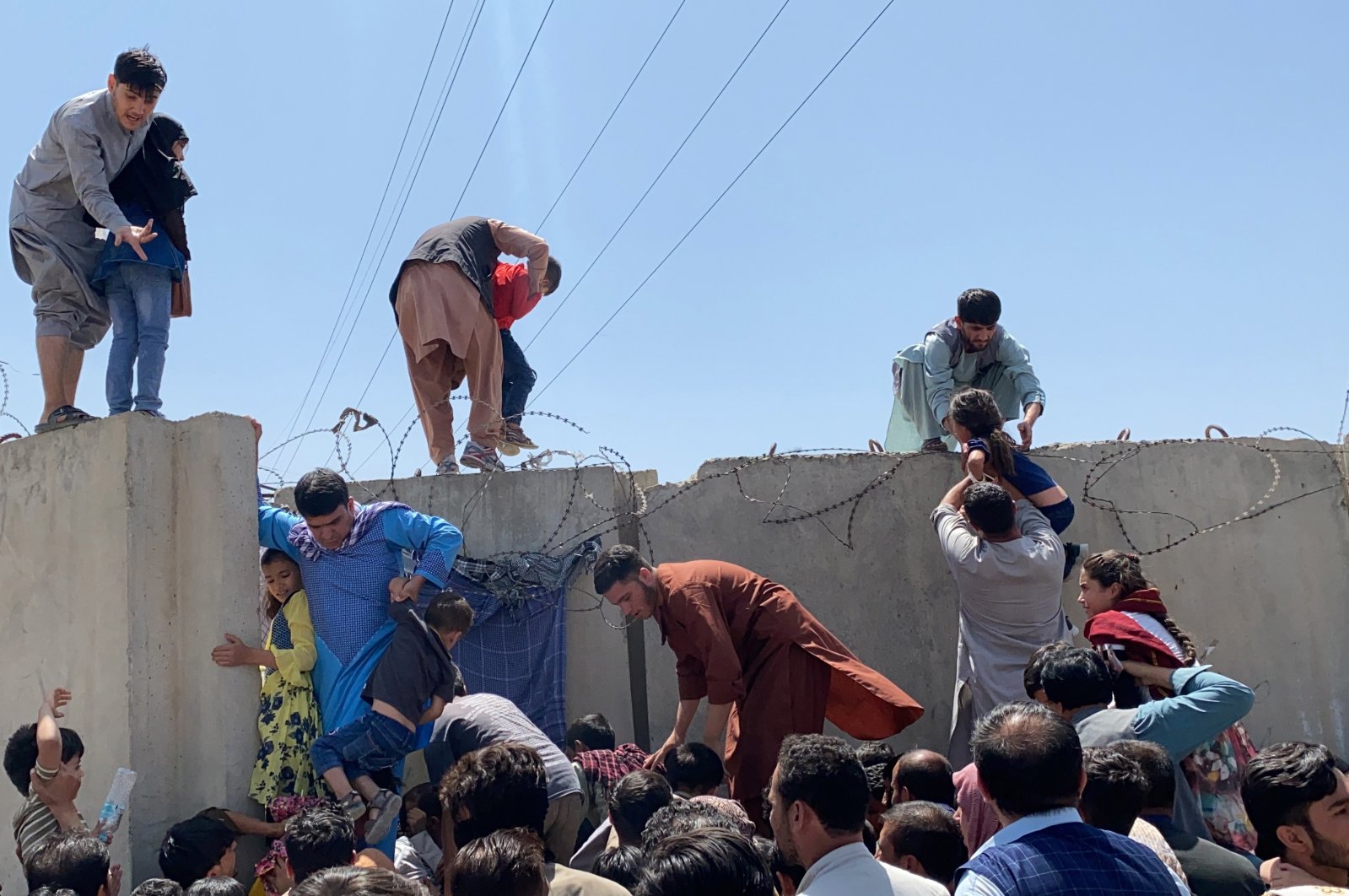 People struggle to cross the boundary wall of Kabul Hamid Karzai International Airport to flee the country after rumors that foreign countries are evacuating people even without visas after the Taliban took control of Kabul, Afghanistan, Aug. 16, 2021. (EPA Photo)
by German Press Agency - DPA Dec 07, 2021 8:43 am
RECOMMENDED

Just 5% of Afghan nationals who applied to leave the country under one U.K. scheme after the Taliban came to power received help, with some left behind murdered since the collapse of Kabul, a whistleblower claimed in a report published by the U.K.'s Foreign Affairs Select Committee on Tuesday.

In evidence published on Tuesday, Raphael Marshall, who worked for the Foreign, Commonwealth and Development Office (FCDO) during the evacuation effort, explained that at one point he was the only person monitoring an inbox where pleas for help were directed. The report painted the evacuation as "one of lack of interest and bureaucracy over humanity."

The government's public statements over hopes the Taliban had changed did not tally with the information he was receiving.

Marshall's written evidence is due to be published by the committee on Tuesday, and its chairperson, conservative member of parliament Tom Tugendhat, said, "Failures betrayed our friends and allies and squandered decades of British and NATO effort."

Marshall worked in the Afghan Special Cases team, which handled the cases of Afghans who were at risk because of their links with the U.K., but who did not work directly for the U.K. government.

He estimated that "between 75,000 and 150,000 people (including dependents) applied for evacuation" to the team under the leave outside the rules (LOTR) category.

And he estimated that "fewer than 5% of these people have received any assistance" and states that "it is clear that some of those left behind have since been murdered by the Taliban."

He said that no member of the team working on these cases had "studied Afghanistan, worked on Afghanistan previously or had a detailed knowledge of Afghanistan."

Marshall added that junior officials were "scared by being asked to make hundreds of life and death decisions about which they knew nothing."

His remarks come as officials from the FCDO and the ambassador to Afghanistan, Sir Laurie Bristow, are due to give evidence to the committee on Tuesday.

Marshall alleged that then-foreign secretary Dominic Raab "did not fully understand the situation."

Emails were opened but no action was taken. Raab felt "the purpose of this system was to allow the prime minister and the then-foreign secretary to inform MPs that there were no unread emails," Marshall charged.

He said: "These emails were desperate and urgent. I was struck by many titles including phrases such as 'please save my children.'"

"The contrast between Her Majesty's Government's statements about a changed Taliban and the large number of highly credible allegations of very grave human rights abuses HMG has received by email is striking," he added.

Tugendhat said: "These allegations are serious and go to the heart of the failures of leadership around the Afghan disaster, which we have seen throughout this inquiry."

"These failures betrayed our friends and allies and squandered decades of British and NATO effort. The evidence we've heard alleges dysfunction within the Foreign, Commonwealth and Development Office and substantial failings throughout the Afghanistan evacuation effort."

"The evacuation has been described as a success by some, but these allegations point to a very different story – one of lack of interest, and bureaucracy over humanity. It proved to be a true test of the leadership and effectiveness of the Foreign Office, with the lives of many of our friends and allies in the balance," Tugendhat added.

"This evidence raises serious questions about the leadership of the Foreign Office, and I look forward to putting these to officials, including former Afghanistan Ambassador Sir Laurie Bristow."

A government spokesperson pointed out that, "U.K. government staff worked tirelessly to evacuate more than 15,000 people from Afghanistan within a fortnight."

"This was the biggest mission of its kind in generations and the second-largest evacuation carried out by any country. We are still working to help others leave."

"More than 1,000 FCDO staff worked to help British nationals and eligible Afghans leave during Op Pitting. The scale of the evacuation and the challenging circumstances meant decisions on prioritization had to be made quickly to ensure we could help as many people as possible," the spokesperson added.

"Regrettably we were not able to evacuate all those we wanted to, but our commitment to them is enduring, and since the end of the operation we have helped more than 3,000 individuals leave Afghanistan."