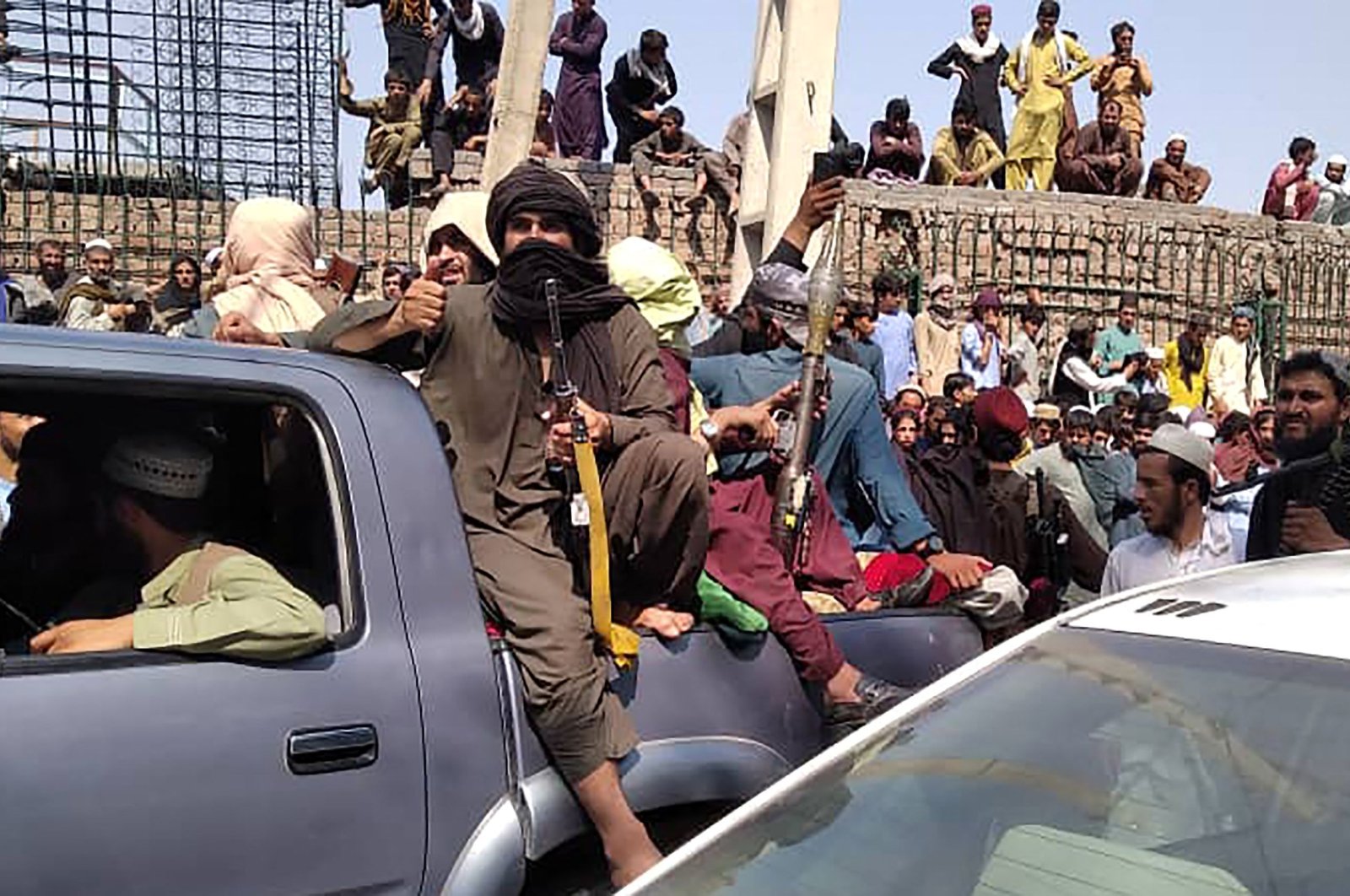 Taliban insurgents entered Afghanistan’s capital Kabul and declared they expected to take power within days, promising to run the country more moderately than their earlier hardline approach as foreign diplomats and many locals scrambled to leave

The country's Interior Minister Abdul Sattar Mirzakwal said there would be a "peaceful transfer of power" to a transitional government.

Shortly before, Taliban spokesperson Zabihullah Mujahid told the BBC he could confirm there were talks with the presidential palace about a peaceful takeover of power. The head of the High Council for National Reconciliation (HCNR), Abdullah Abdullah, was organizing them.

Defense Minister Bismillah Khan Mohammadi also said in a video address published on Facebook that he, as a representative of the armed forces, guaranteed Kabul's security. He said it was known that Ghani had met with domestic politicians and had given them the responsibility to form an authoritative delegation to travel to Doha on Monday to reach an agreement with the Taliban on the Afghanistan issue.

"I assure all of you that Kabul's security will be maintained until an agreement is reached," Mohammadi said, as Deutsche Presse-Agentur (dpa) reported.

Ghani urged government forces Sunday to maintain security in Kabul, after the Taliban paused their sweeping advance on the outskirts of the capital, causing widespread panic.

"It is our responsibility and we will do it in the best possible manner. Anyone who thinks about chaos, plunder or looting will be tackled with force," he said in a video released to media.

On Saturday, Ghani vowed to prevent further bloodshed, as Taliban fighters closed in on Kabul after routing his armed forces over the past 10 days. In a recorded address to the nation, Ghani said he wanted to stop the violence "as a historic mission".

"I will not let the imposed war on people cause more deaths," he said, appearing sombre and sitting before an Afghan flag. The president gave no hint he would resign or take responsibility for the calamitous military collapse, but said the armed forces could be "remobilized" and consultations were taking place to try to help end the war.

He offered few specifics on what his administration was planning, with government control over Afghanistan all but collapsed, but the presidential palace later said in a statement that "a delegation with authority should soon be appointed by the government and be ready for negotiation".

Earlier on Sunday, Taliban fighters entered the outskirts of the Afghan capital after promising not to take it by force, but the uncertainty panicked workers who fled government offices as helicopters landed at the U.S. Embassy.

Three Afghan officials told The Associated Press (AP) that the Taliban were in the districts of Kalakan, Qarabagh and Paghman in the capital. In a nationwide offensive that has taken just over a week, the Taliban has defeated, co-opted or sent Afghan security forces fleeing from wide swaths of the country, even though they had some air support from the U.S. military.

The lightning speed of the push has shocked many and raised questions about why Afghan forces crumbled despite years of U.S. training and billions of dollars spent. Just days ago, an American military assessment estimated it would be a month before the capital would come under insurgent pressure.

Taliban spokesperson Suhail Shaheen told Qatar’s Al-Jazeera English satellite news channel that the insurgents are "awaiting a peaceful transfer of Kabul city.” He declined to offer specifics on any possible negotiations between his forces and the government. But when pressed on what kind of agreement the Taliban wanted, Shaheen acknowledged that they were seeking an unconditional surrender by the central government. The group also said that it seek an inclusive government where all Afghans participate

Taliban negotiators headed to the presidential palace Sunday to discuss the transfer, said an Afghan official who spoke on condition of anonymity for fear of reprisals. It remained unclear when that transfer would take place. The negotiators on the government side included former President Hamid Karzai and Abdullah, an official said. Abdullah long has been a vocal critic of Ghani, who long refused to give up power to secure a deal with the Taliban.

The official, who spoke on condition of anonymity to discuss details of the closed-door negotiations, described them as "tense.” Mohammadi sought to reassure the public in a video message. "I assure you about the security of Kabul,” he said.

Earlier, the insurgents also tried to calm residents of the capital.

"No one’s life, property and dignity will be harmed and the lives of the citizens of Kabul will not be at risk,” the insurgents said in a statement. However, a voice message circulating on social media purportedly from a Taliban commander also warned: "no one is allowed to enter into Kabul province.”

Civilians fearing that the Taliban could reimpose the kind of brutal rule that all but eliminated women’s rights rushed to leave the country, lining up at cash machines to withdraw their life savings. The Taliban said that women will be allowed to leave their homes unaccompanied, wear the hijab and their rights will be respected. They underlined that under a new policy, women will be granted access to education and allowed to work.

Despite the pledges, panic set in as many rushed to leave the country through the Kabul airport, the last route out of the country as the Taliban now hold every border crossing. Rapid shuttle flights of Boeing CH-47 Chinook helicopters near the embassy began a few hours later after the militants seized the nearby city of Jalalabad.

Diplomatic armored SUVs could be seen leaving the area around the post. The U.S. State Department did not immediately respond to questions about the movements. However, wisps of smoke could be seen near the embassy's roof as diplomats urgently destroyed sensitive documents, according to two American military officials who spoke on condition of anonymity because they were not authorized to discuss the situation. The smoke grew heavier over time in the area, home to other nation's embassies as well.

The U.S. decided a few days ago to send in thousands of troops to help evacuate some personnel from its embassy. Thousands of civilians now live in parks and open spaces in Kabul itself, fearing a Taliban government that could reimpose a brutal rule that all but eliminated women’s rights. Some ATMs stopped distributing cash as hundreds gathered in front of private banks, trying to withdraw their life savings.

At Kabul Hamid Karzai International Airport, Afghan forces abandoned the field to Western militaries, said a pilot who spoke on condition of anonymity to discuss security matters. An Afghan flight earlier landed at the airport from Kandahar loaded with troops who surrendered to the Taliban, even after taking shrapnel damage from a mortar attack, the pilot said.

Ghani, who spoke to the nation Saturday for the first time since the offensive began, appears increasingly isolated as well. Warlords he negotiated with just days earlier have surrendered to the Taliban or fled, leaving Ghani without a military option. Ongoing negotiations in Qatar, the site of a Taliban office, also have failed to stop the insurgents' advance.

Jalalabad, Afghanistan's last major city besides the capital not held by the militants, fell to the Taliban earlier Sunday. Militants posted photos online showing them in the governor’s office in Jalalabad, the capital of Nangarhar province.

Abrarullah Murad, a lawmaker from the province told AP that the insurgents seized Jalalabad after elders negotiated the fall of the government there. Murad said there was no fighting as the city surrendered.

The militants took also Maidan Shar, the capital of Maidan Wardak, on Sunday, only some 90 kilometers (55 miles) from Kabul, Afghan lawmaker Hamida Akbari and the Taliban said. Another provincial capital in Khost also fell to the Taliban, said a provincial council member who spoke on condition of anonymity for fear of reprisals.

The fall Saturday of Mazar-e-Sharif, the country’s fourth-largest city, which Afghan forces and two powerful former warlords had pledged to defend, handed the insurgents control over all of northern Afghanistan. Atta Mohammad Noor and Abdul Rashid Dostum, two of the warlords Ghani tried to rally to his side days earlier, fled over the border into Uzbekistan on Saturday, said officials close to Rashid Dostum.

They spoke on condition of anonymity as they weren’t authorized to publicly speak about his movements. Writing on Twitter, Noor alleged a "conspiracy” aided the fall of the north to the Taliban, without elaborating.

"Despite our firm resistance, sadly, all the government and the Afghan security forces equipment were handed over to the Taliban as a result of a big organized and cowardly plot,” Noor wrote. "They had orchestrated the plot to trap Marshal Dostum and myself too, but they didn’t succeed.” The Taliban also insisted their fighters wouldn’t enter people’s homes or interfere with businesses.

They also said they’d offer an "amnesty” to those who worked with the Afghan government or foreign forces. "The Islamic Emirate once again assures all its citizens that it will, as always, protect their life, property and honor and create a peaceful and secure environment for its beloved nation,” the militants said. "In this regard, no one should worry about their life.”

Despite the pledge, those who can afford a ticket have been flocking to Kabul Hamid Karzai International Airport, the only way out of the country after the Taliban took the last border crossing still held by the government Sunday at Torkham. The group said Sunday that foreigners should leave Kabul through its airport or register their presence with the future Taliban administration.