Afghans line up for passports to escape Taliban-overrun country 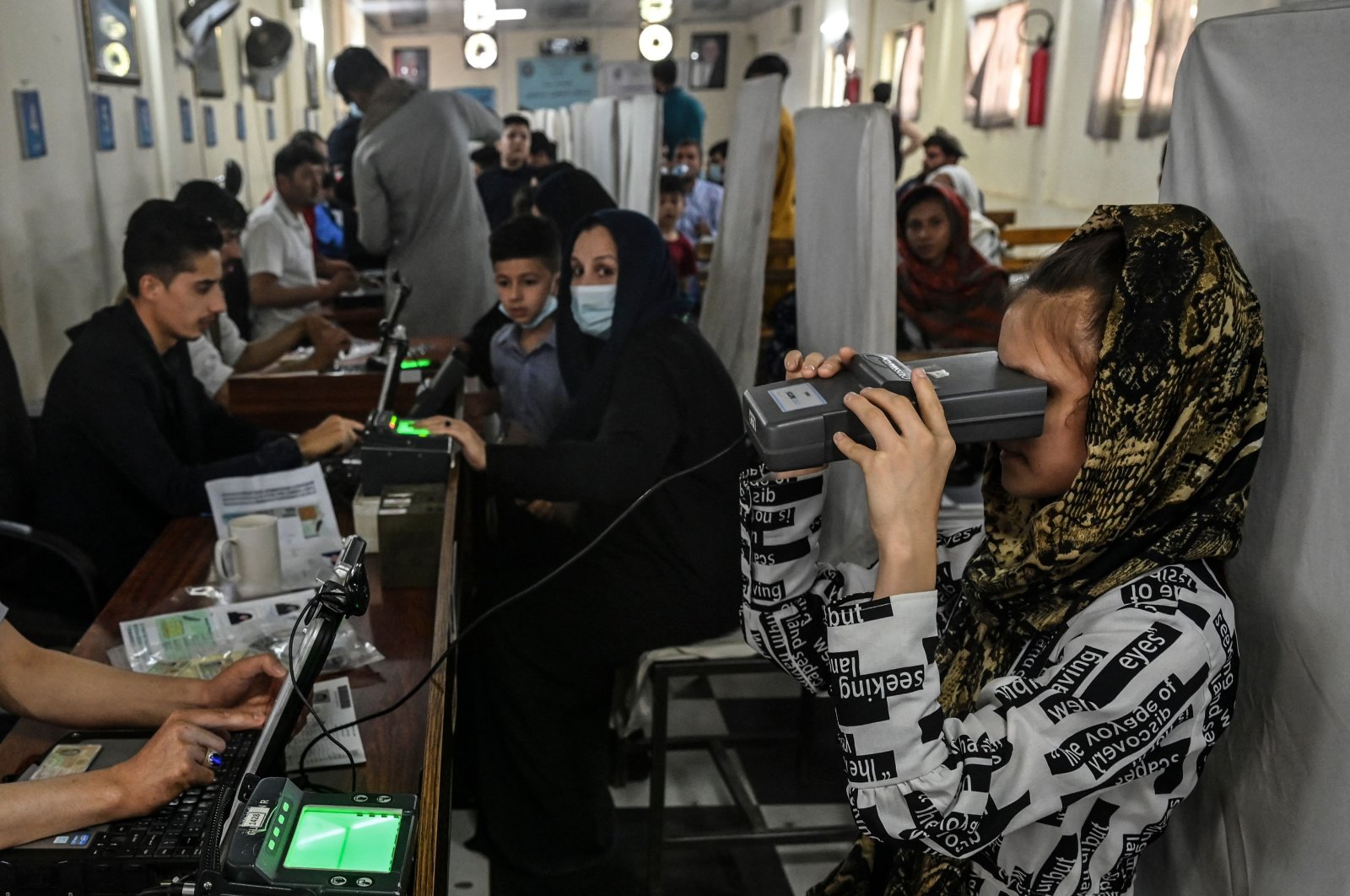 A woman looks through an optical biometric reader to submit her passport application at an office in Kabul, Afghanistan, July 25, 2021. (AFP Photo)
by French Press Agency - AFP Jul 28, 2021 1:00 pm
RECOMMENDED

Like thousands of his compatriots, Abdel Khalid Nabyar waited outside Afghanistan's main passport office to apply for the precious travel document that would allow him to leave the war-torn nation.

With the Taliban making huge advances in the countryside as foreign forces wind up their withdrawal, many Afghans – those with the means, at least – are looking for a way out.

"If the situation worsens, we might have to leave," said Nabyar, 52, who feels particularly vulnerable because he once ran a shop on a NATO military base. Not everyone will make an immediate exit, but most want the safety net – knowing they can leave at short notice.

Dozens begin lining up at the passport office in Kabul before dawn most days, and by eight in the morning the queue already stretches for a good hundred meters. Applicants slowly shuffle forward, clutching see-through plastic folders containing their documents. Occasionally a police officer is needed to collar queue-jumpers trying their luck. One official appeared irritated by the interest shown by journalists at the throng.

"Getting a passport is a normal request for any Afghan," she said. But in recent weeks the numbers applying have been anything but usual. "We are getting about 10,000 people a day against 2,000 normally," said one police officer.

Khalilullah, a 36-year-old engineer, arrived at 5:00 am with his wife and three children.

"There were already 300 people in line," he told Agence France-Presse (AFP), more than three hours after joining the queue. Applicants need to have their picture taken, eyes biometrically recorded and fingerprints taken as part of the process, with a thorough security frisk thrown in for good measure.

Zeenat Bahar Nazari had been waiting for hours when she spoke to AFP. "When we were children, our families said that the Taliban ... killed people, made them disappear," said the 23-year-old computer science student. "They were violent towards women, did not allow them to be educated and deprived them of their basic rights."

While Nazari is too young to remember the Taliban's first regime, from 1996 to 2001, she knows what they have done since.

Many of those in line had no idea where they would go if given the chance – or if any other country would even have them. Most nations require Afghans to jump through hoops for a visa, with massive quantities of documentation required along with proof of financial stability that few possess. Still, everyone wants to be ready.

"Our lives are in danger; we have no choice," said Sardar, 52, who declined to be further identified because he fears for his life after working as a translator for a British civil society group. Interpreters for foreign troops and embassies have been particularly vulnerable to Taliban reprisals and many nations have evacuated thousands under emergency visa schemes.

Former civil servant Haji Sayed Mohammad Sultani wants a passport, but can't imagine becoming a refugee again -- as he was during the Taliban regime and the Soviet invasion and civil war that preceded it. "As long as Afghanistan is liveable, we will not leave our country," the 45-year-old said.