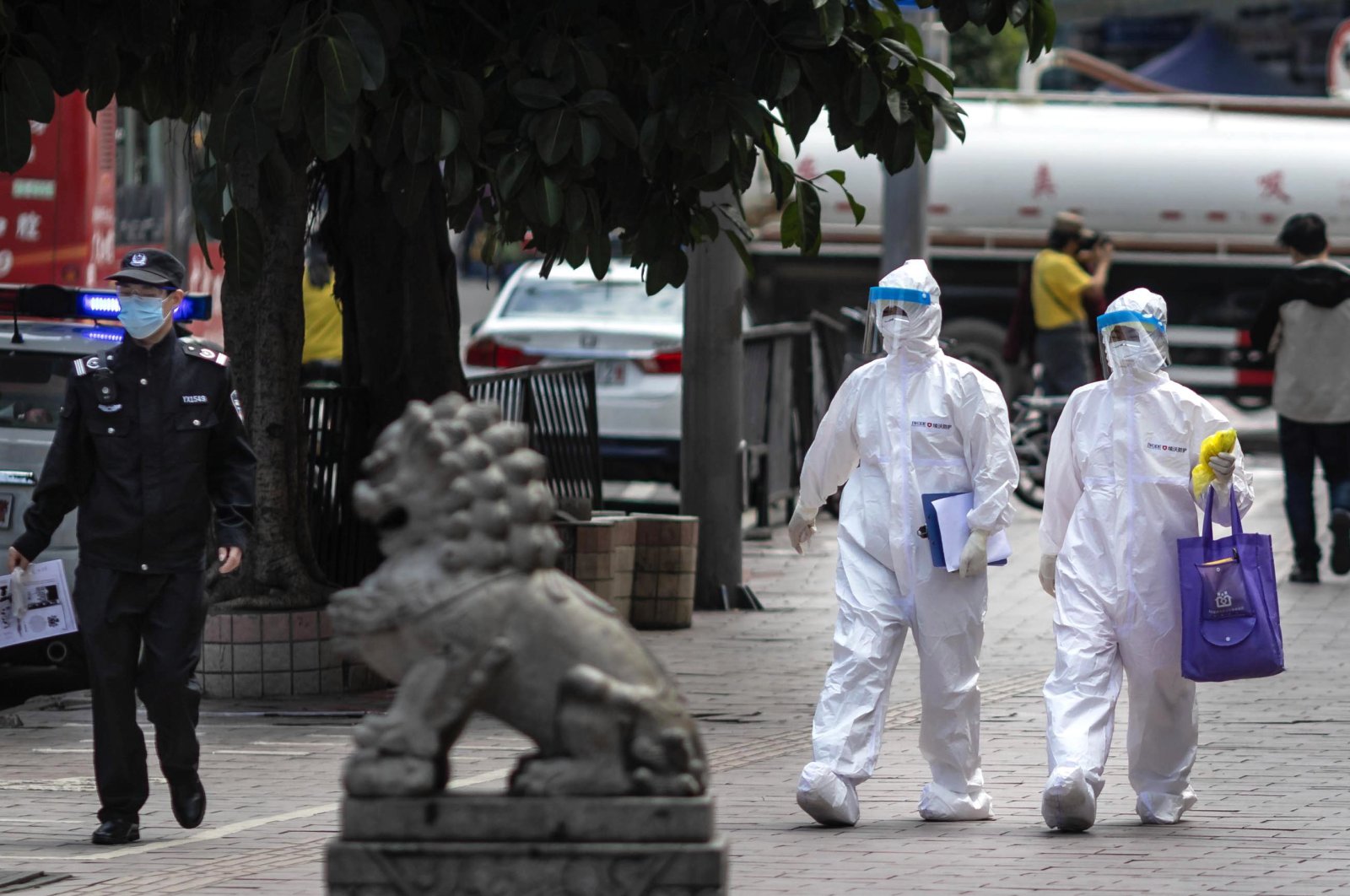 Police and medical workers walk on a street in a part of the town where most African's live and work, in Guangzhou, Guangdong province, China, April 13, 2020. (EPA Photo)
by REUTERS Apr 16, 2020 11:24 am
RECOMMENDED

Huddled under a highway bridge with a small bag of belongings, a 19-year-old student from Ivory Coast was desperately dialing his few contacts in China.

The student said he arrived in the southern city of Guangzhou last week, after completing his quarantine in another city, during a coronavirus clampdown that several African countries and Africans in Guangzhou say has unfairly targeted them.

"I really need help. I just don't want to sleep on the streets again," he said on Monday, asking not to be identified by name.

He came to China to study the language but his university shutdown due to the coronavirus. Hotels kept turning him away, but later on Monday, he said he had found one.

Several African ambassadors wrote to China's foreign minister last week, calling for the "cessation of forceful testing, quarantine and other inhuman treatments meted out to Africans."

China's foreign ministry said on Monday all foreigners are treated equally. But it also said virus controls on Africans would be lifted, apart from confirmed cases and those who have had close contact with them.

"African friends will be treated fairly, justly and amicably in China," the ministry said.

Many foreigners in China say they have faced suspicion as the country brought its own outbreak under control, only to see new cases brought from other countries. China has barred entry to most foreigners, and the vast majority of imported cases of the disease have come from Chinese nationals returning home.

In Guangzhou, a hub for African traders, authorities said on Tuesday that 111 Africans had tested positive for the coronavirus, while a total of 4,553 Africans had undergone testing since April 4, state media reported.

"If they do this to all foreigners, then it's not a problem, but it's only black people," Soumana Toudou, a garment trader from Niger, told Reuters by WhatsApp. He said he was undergoing his second 14-day quarantine because the authorities did not believe he had completed his first.

Such decisions are made at the local level and Reuters could not independently confirm this.

The scrutiny from the authorities had triggered hostility from Chinese residents, one student said.

"The selective testing has set the Guangzhou locals into a panic, thinking black people are carrying the virus," he said. He declined to be identified.

A Communist Party social worker, speaking on condition of anonymity, told Reuters on Monday that black people were specifically being forced to enter a period of quarantine.

Last week, authorities announced that two neighborhoods popular with Africans would be locked down to curb the coronavirus after five Nigerians tested positive.

On Monday, the United States consulate general in Guangzhou advised African-Americans or those who believe Chinese officials may suspect them of having contact with African nationals, to avoid the city.

The provincial foreign affairs office provided no immediate comment to Reuters about complaints from Africans and embassies that Africans had been unfairly targeted.

China has stepped up its engagement with Africa in recent years, with state-owned companies building infrastructure and signing hundreds of deals across the continent.

Guangzhou was home to 13,652 Africans in 2019 and about 351,000 Africans entered the city from abroad last year, official figures show.

Videos on social media in recent days showed what appeared to be Africans sleeping on Guangzhou streets after being evicted from their apartments. Reuters could not independently verify the footage.

Property agents near Guangzhou's Sanyuanli trading hub said such evictions of foreigners, including Africans, had contributed to a glut of empty apartments.

"For a white person, you can't rent around here now because of the virus, but you'll be welcome again in a few months," said one agent, referring to when the pandemic passes. She declined to give her name.

"But black people, no one will accept them."

A spokeswoman for McDonald's in China apologized on Tuesday after staff at a Guangzhou branch forced black customers to leave.

The fast-food chain had temporarily closed the outlet while staff completed "diversity and inclusion" training, spokeswoman Regina Hui said in a statement.

The chairman of the African Union, Moussa Faki Mahamat, was receptive, saying on Twitter on Monday he had spoken to Foreign Minister Wang Yi.

"He reassured me of measures underway in Guangzhou to improve the situation of Africans, in line with the strong and brotherly partnership between Africa and China."