Anti-Muslim violence in India does not come as a surprise 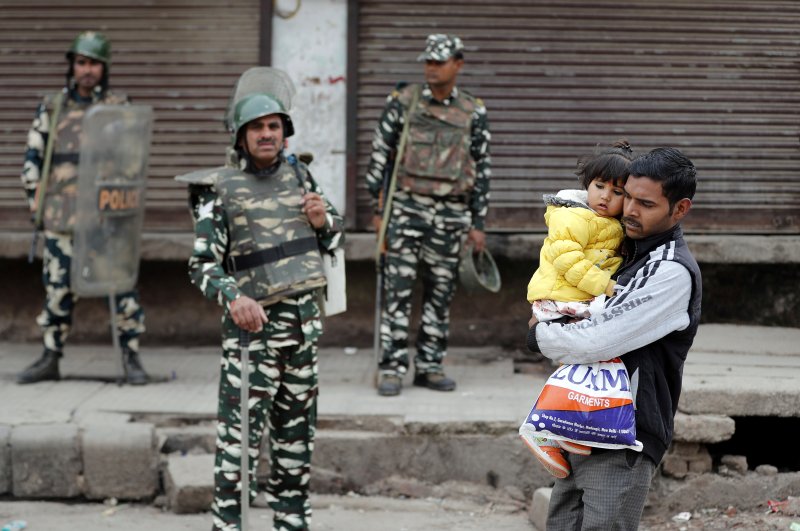 A man carrying a child walks past security forces in a riot affected area following clashes between people demonstrating for and against a new citizenship law, New Delhi, Feb. 27, 2020. (REUTERS Photo)
by Yusuf Selman İnanç Feb 27, 2020 11:23 am

Indian capital, New Delhi witnessed the killing of Muslims and the setting of mosques on fire by Hindu mobs as the sectarian violence comes as a result of the government’s ongoing anti-Muslim policies

India’s sectarian policies caused the death of dozens, the renewal of sectarian fights and the growing tensions between Muslims and Hindus. As more than 30 people were killed in New Delhi’s streets, there is fear and anger among Muslims as to why they were punished while prudent Hindus are astonished as they are aware that the sectarian escalation may lead to unwanted results. Revoke of the special status of Jammu and Kashmir, the anti-Muslim citizenship law and building detention camps for Bengalis in Assam are the first steps of the current Indian government to create a purified India, based on Hindu identity.

In New Delhi’s streets, Hindu protesters and mobs attacked Muslims, set a mosque on fire and killed many people. The incidents started during a demonstration, organized by Muslim groups against the so-called citizenship law. The law allows non-Muslim minorities to obtain Indian citizenship. It is considered as clear discrimination against Muslims. Also, the law is seen as a violation of secularism as the country's constitution declares that Indian citizenship cannot be based on religion. However, the populist politics of the current government have gradually led to an anti-Muslim stance in the country, including the demolishment of mosques.

India's new citizenship law came as an amendment of legislation dating back to 1995. While the law allows giving Indian citizenship to persecuted minorities like Hindus, Sikhs, Buddhists, Jains, Parsis and Christians from neighboring countries like Bangladesh, Afghanistan or China, Muslims are excluded. In a similar vein, the Bengali immigrants in Assam are not allowed to travel to or work in India. Instead, new detention camps are built to keep people there. Yet, this policy is seen as discriminatory against Muslims, too.

Indian Prime Minister Narendra Modi is known for his anti-Muslim and strong nationalist stance, which causes fears among Indians since the country is an unprecedentedly multi-ethnic and multi-religious country. His decision to revoke the special status of Kashmir and Jammu was another provoking action. The special status granted to the region by the Indian constitution in 1954 was revoked and the Indian government decided that the region would be directly ruled by New Delhi as one of its provinces. This decision increased the tensions and fueled the sectarian hatred in the country.

The recent bout of sectarian violence occurred during U.S. President Donald Trump’s visit to the country. Although Trump praised the ‘religious freedom’ in India, U.S. House Foreign Affairs Committee Chairman Eliot Engel said he was “deeply troubled” because of the deaths: “The right to protest is a key aspect of democracy, but they must remain peaceful and police must ensure the safety of all.” During the visit, Modi preferred not to mention the ongoing tension in the capital’s streets. His party spokesman Tajinder Pal Singh Bagga said they were not supporting any kind of violence. He claimed that the incidents were pre-planned as the government’s rivals tried to undermine its credibility during Trump’s visit. However, Delhi police were accused of not taking necessary measures and not even intervening in the incidents at the right time. Some activists claimed that the police looked away while people were killed. Some Muslims said the police were even helping the mobs.