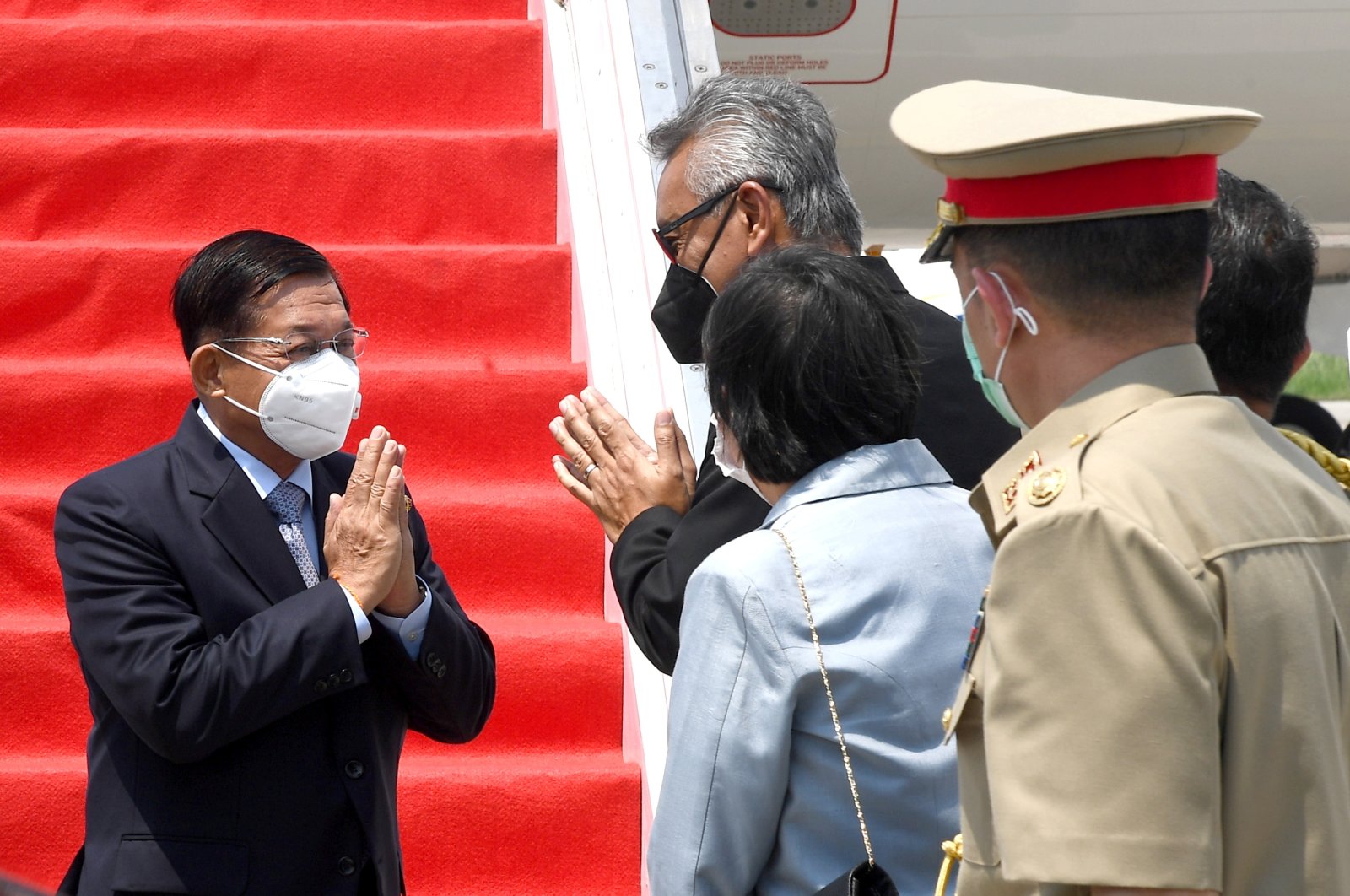 Myanmar's junta chief Senior General Min Aung Hlaing (L) gestures as he is welcomed upon his arrival ahead of the ASEAN leaders' summit, at the Soekarno Hatta International airport in Tangerang, on the outskirts of Jakarta, Indonesia, April 24, 2021. (Indonesian Presidential Palace via Reuters)
by ASSOCIATED PRESS Apr 24, 2021 9:42 am
RECOMMENDED

Southeast Asian leaders are to meet Myanmar’s top general and coup leader in an emergency summit in Indonesia Saturday, and are expected to press calls for an end to violence by security forces that has left hundreds of protesters dead as well as the release of Aung San Suu Kyi and other political detainees.

There is little hope for an immediate breakthrough in the two-hour gathering in Jakarta between Senior Gen. Min Aung Hlaing and the six heads of state and three foreign ministers representing the Association of Southeast Asian Nations. But his decision to face them offers a rare chance for the 10-nation bloc to directly deal with the general who ousted one of its leaders in a Feb. 1 coup.

“The unfolding tragedy has serious consequences for Myanmar, ASEAN and the region,” Singapore’s Foreign Minister Vivian Balakrishnan said on the eve of the summit.

One proposal, which has been discussed in preliminary meetings, is for Brunei Prime Minister Hassanal Bolkiah, the current ASEAN chair, to travel to Myanmar to meet the military leadership and Suu Kyi’s camp to encourage dialogue. He would be accompanied by ASEAN Secretary General Lim Jock Hoi — also from Brunei — if the junta agreed, a Southeast Asian diplomat told The Associated Press on condition of anonymity because he is not authorized to speak to the media.

Another diplomat said humanitarian aid could be offered to Myanmar if conditions improved. The diplomat also spoke to AP on condition of anonymity for lack of authority to discuss such plans publicly.

Foreign Minister Retno Marsudi of Indonesia expressed hopes that “we can reach an agreement on the next steps that can help the people of Myanmar get out of this delicate situation.”

Following the coup, ASEAN, through Brunei, issued a statement that did not expectedly condemn the power grab but urged “the pursuance of dialogue, reconciliation and the return to normalcy in accordance with the will and interests of the people of Myanmar.” Amid Western pressure, however, the regional group has struggled to take a more forceful position on issues but has kept to its non-confrontational approach.

All ASEAN states agreed to meet Min Aung Hlaing but would not address him as Myanmar’s head of state in the summit, the Southeast Asian diplomat said. Critics have said ASEAN’s decision to meet him was unacceptable and amounted to legitimizing the overthrow and the deadly crackdown that followed. Daily shootings by police and soldiers have killed more than 700 protesters and bystanders, according to several independent tallies.

Amnesty International urged Indonesia and other ASEAN states to investigate Min Aung Hlaing over “credible allegations of responsibility for crimes against humanity in Myanmar.” As a state party to a U.N. convention against torture, Indonesia has a legal obligation to prosecute or extradite a suspected perpetrator on its territory, it said.

“The Myanmar crisis trigged by the military presents ASEAN with the biggest test in its history,” said Emerlynne Gil of the London-based rights group. “This is not an internal matter for Myanmar but a major human rights and humanitarian crisis which is impacting the entire region and beyond.”

Police dispersed dozens of protesters opposing the coup and the junta leader’s visit.

More than 4,300 police have fanned out across the Indonesian capital to secure the meetings, held under strict safeguards amid the pandemic. Indonesia has reported the highest number of COVID-19 infections and deaths in Southeast Asia.

The leaders of Thailand and the Philippines skipped the summit to deal with coronavirus outbreaks back home. Laos, which has the least number of infections in the region but this week imposed a lockdown, also canceled at the last minute. The face-to-face summit is the first by ASEAN leaders in more than a year.

ASEAN's diversity, including the divergent ties of many of its members to either China or the United States, along with a bedrock policy of non-interference in each other’s domestic affairs and deciding by consensus, has hobbled the bloc’s ability to rapidly deal with crises.