ASEAN urged to mull Myanmar’s expulsion ahead of summit 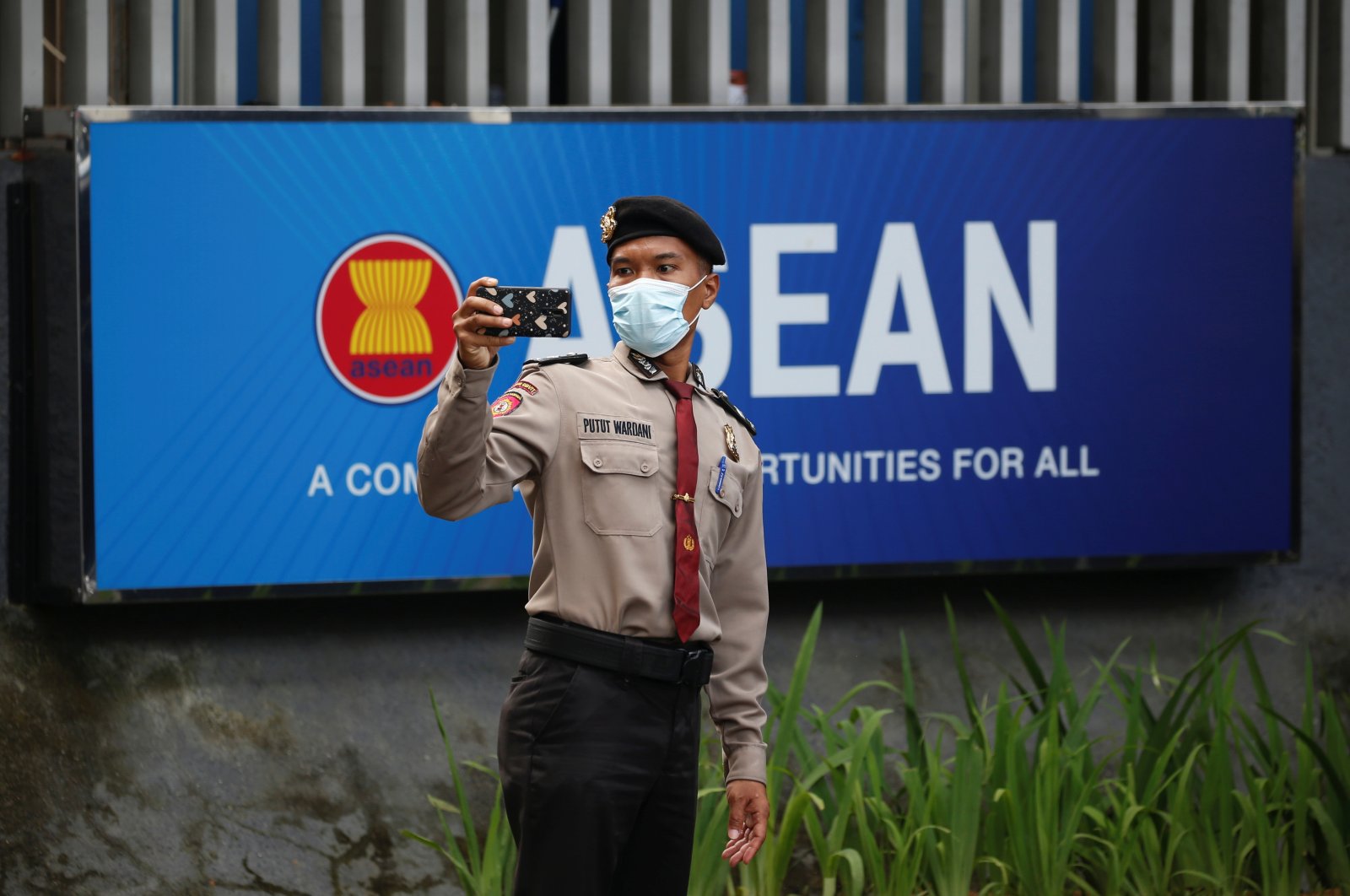 A police officer takes a picture outside the Association of Southeast Asian Nations (ASEAN) secretariat building, ahead of the ASEAN leaders' meeting in Jakarta, Indonesia, April 23, 2021. (Reuters Photo)
by DAILY SABAH WITH AGENCIES Apr 23, 2021 1:03 pm

International human rights groups, nongovernmental organizations (NGOs) and activists are urging the Association of Southeast Asian Nations (ASEAN) to investigate Myanmar's junta leader for crimes against humanity, and are even making calls to consider the nation's expulsion from the bloc, as member states prepare to attend a regional summit on the crisis in his country this week

Amnesty International urged Southeast Asian nations Friday to launch an inquiry into the Myanmar coup leader's crimes against humanity amid reports that he will attend a regional summit. The ASEAN summit is to be held Saturday in Jakarta, Indonesia.

Senior General Min Aung Hlaing, Myanmar's junta chief who ousted the civilian government on Feb. 1, is likely to attend, diplomats and officials in the host nation have said. Authorities in Myanmar have not commented on the reports.

"As a state party to the United Nations Convention against Torture, Indonesia has a legal obligation to prosecute or extradite a suspected perpetrator on its territory," Amnesty said in a statement.

Indonesian President Joko Widodo and Prayuth discussed the summit in a phone call Thursday morning. During the conversation, Prayuth acknowledged that the situation in Myanmar is a challenging issue for peace and stability in the region, according to a press statement.

The meeting is the first concerted international effort to ease the crisis in Myanmar, where security forces have killed hundreds of pro-democracy protesters since the February coup. It is also a test for ASEAN, which traditionally does not interfere in the internal affairs of a member state and operates by consensus.

"The Myanmar crisis triggered by the military presents ASEAN with the biggest test in its history," Emerlynne Gil, Amnesty’s deputy regional director for research, said in the statement. "The bloc's usual commitment to non-interference is a non-starter: This is not an internal matter for Myanmar but a major human rights and humanitarian crisis which is impacting the entire region and beyond."

"ASEAN leaders will not be able to achieve anything at this summit to solve the current crisis without consulting and negotiating with the rightful representatives of the peoples of Myanmar," the NGOs said in a letter published on social media.

Myanmar's military has shown no sign of wanting to talk to members of the government it ousted, accusing some of them of treason, which is punishable by death.

Last week, Myanmar's pro-democracy politicians, including ousted members of parliament, announced the formation of a National Unity Government that nominally includes deposed leader Aung San Suu Kyi, who has been in detention since the coup, as well as leaders of the protests and ethnic minorities. The junta has called it an unlawful organization.

The foreign minister of China, Myanmar's giant neighbor, and which many protesters say supports the junta, said he hoped the summit would pave the way for a "soft landing."

China is not a member of ASEAN but is included in an ASEAN Plus Three grouping, along with Japan and South Korea. It was not immediately clear whether China will be attending Saturday's meeting in Jakarta.

"China will maintain close communication with ASEAN and continue to handle any work related to Myanmar in its own way," said China's State Councillor Wang Yi, who is also the foreign minister.

A rights organization working in the area, Fortify Rights, said Friday, ASEAN ignores Myanmar’s elected government and “lends legitimacy to an illegal and brutal military regime” by inviting coup leader to the summit.

The Burmese Rohingya Organization United Kingdom (BROUK), which has been a leading voice for Rohingya people around the world, also called on ASEAN to “unite to push the Myanmar junta to end horrific abuses against ordinary people and ensure it does not recognize the military as the country’s legitimate rulers."

The president of BROUK, Tun Khin, said that the summit is ASEAN’s last chance to prove that it can end a crisis in its own neighborhood.

"While the diplomatic efforts of countries like Malaysia, Indonesia and Singapore are commendable, it is a stain on the region as a whole that others continue to defend the Tatmadaw (military)," he added. “Southeast Asian leaders must stand united and condemn Myanmar’s military for the brutal violence it has unleashed against its own people since the coup.”

The Assistance Association for Political Prisoners (AAPP), a Myanmar activist group, says 739 people have been killed by security forces since the coup and 3,300 people are in detention.

The Myanmar military has stepped up the use of lethal force as it seeks to quell mass protests against the junta, with an estimated 250,000 people now displaced, according to U.N. envoy Tom Andrews.

The U.N.'s World Food Programme (WFP) warned Thursday that "hunger and desperation" were rising sharply across Myanmar, due to preexisting poverty, COVID-19 and the political chaos.

"A concerted response is required now to alleviate immediate suffering and to prevent an alarming deterioration in food security," he added, according to Agence France-Presse (AFP).

The WFP said its new food assistance operation would target up to 2 million vulnerable people, but it estimates that up to 3.4 million more will be hungry within six months.