At least 5 die inside Kabul airport after Taliban takeover 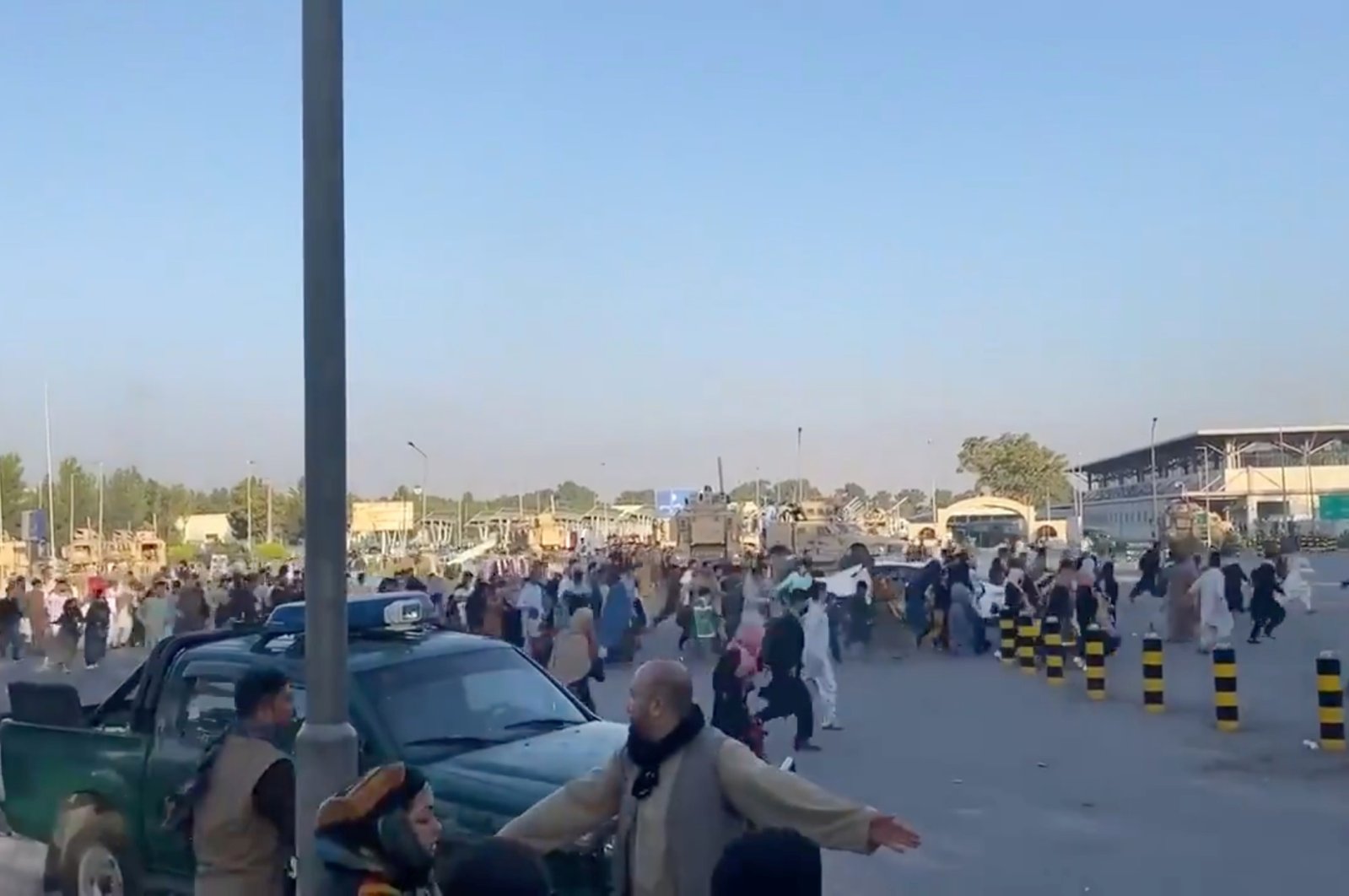 In this still image taken from social media, a horde of people run towards the Kabul Hamid Karzai Internation Airport terminal, after Taliban insurgents took control of the presidential palace in Kabul, Afghanistan, Aug. 16, 2021. (Jawad Sukhanyar via Reuters)
by Agencies Aug 16, 2021 10:18 am
RECOMMENDED

One witness said he had seen the bodies of five people being taken to a vehicle. Another witness said it was not clear whether the victims were killed by gunshots or in a stampede.

U.S. troops, who are in charge of the airport, earlier fired in the air to scatter the crowd, a U.S. official said. Officials were not immediately available to comment on the deaths.

VIDEO — Footage shows several Afghans shot in Kabul airport as people flooded to aircrafts in hopes of being evacuated. Reports say shots were fired into the air to disperse crowds; details remain unclearpic.twitter.com/Z3kicoL7uN

President Ashraf Ghani fled the country on Sunday night as the insurgents encircled the capital, capping a military victory that saw them capture all cities in just 10 days.

"The Taliban have won with the judgement of their swords and guns, and are now responsible for the honor, property and self-preservation of their countrymen," Ghani said after fleeing.

Government forces collapsed without the support of the U.S, military, which invaded in 2001 after the Sept. 11 attacks and toppled the Taliban for its support of al-Qaida.

But the United States ultimately failed to build a democratic government capable of withstanding the Taliban, despite spending billions of dollars and providing two decades of military support.

After police and other government forces gave up their posts in Kabul on Sunday, Taliban fighters took over checkpoints across the city and entered the presidential palace.

Militants with rifles slung over their shoulders were also seen walking Monday through the streets of the Green Zone, the formerly heavily fortified district that houses most embassies and international organizations.

The Taliban sought to reassure the international community that Afghans should not fear their them, and they will not take revenge against those who supported the U.S.-backed alliance.

In a message posted to social media, Taliban co-founder Abdul Ghani Baradar called on his fighters to remain disciplined after taking control of the city.

"Now it's time to test and prove, now we have to show that we can serve our nation and ensure security and comfort of life," he said.

The Taliban's capture of the capital had occurred, as in many other cities, without the bloodshed that many had feared.

But there were desperate scenes at Kabul's airport on Monday as people tried to board the few flights available.

"We are afraid to live in this city," a 25-year-old ex-soldier told Agence France-Presse (AFP) as he stood among huge crowds on the tarmac.

"Since I served in the army, the Taliban would definitely target me."

The United States had sent 6,000 troops to the airport to ensure the safe evacuation of embassy staff, as well as Afghans who worked as interpreters or in other support roles. Other governments had also organized charter flights. The U.S. said Monday it had secured the airport, but there was still chaos with witnesses reporting American soldiers firing in the air to warn off crowds.

Authorities then canceled all remaining commercial flights because of the chaos.