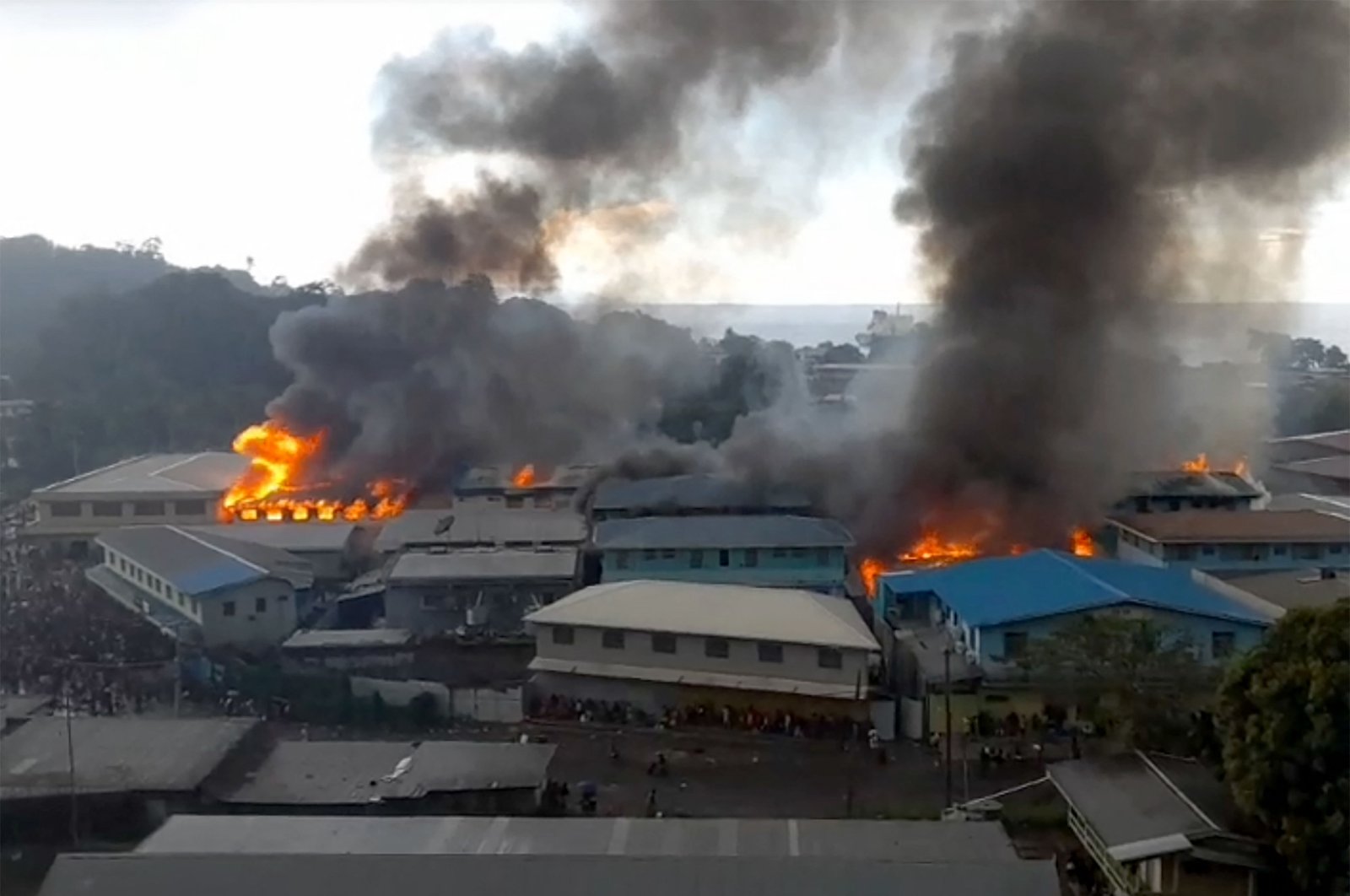 This screengrab taken and received on Nov. 25, 2021, from a video from ZFM Radio shows parts of the Chinatown district on fire in Honiara on Solomon Islands, as rioters torched buildings in the capital in the second day of anti-government protests, Solomon Islands. (JOB RONGO'AU FUOO / ZFM Radio / AFP)
by French Press Agency - AFP Nov 25, 2021 3:59 pm
RECOMMENDED

Australia rushed peacekeepers to the Solomon Islands Thursday hoping to quell riots that threatened to topple the Pacific nation's government and left its capital ablaze.

After a second day of widespread protests and looting in Honiara, Prime Minister Manasseh Sogavare called on neighboring Australia for help.

The first contingent of a 100-strong Australian police and military force was due to arrive late Thursday, as a defiant Sogavare said that although the country had been "brought to its knees" by unrest, he would not resign.

The archipelago nation of around 700,000 people has for decades been beset by ethnic and political tensions. The latest bout of unrest began on Wednesday when thousands of protesters besieged Parliament, setting fire to an outbuilding and calling for Sogavare's ouster.

Since then the protests have quickly descended into a violent free-for-all, with gangs of stick-wielding youths rampaging through the capital, stripping stores of goods and clashing with police.

"There's mobs moving around, it's very tense," one resident told Agence France-Presse (AFP), asking not to be named.

By late Thursday thousands of looters openly defied police lockdown orders, running through the streets carrying boxes, crates and bulging sacks of goods as flames crackled around them and plumes of thick black smoke billowed high above the city.

In Beijing, Foreign Ministry spokesperson Zhao Lijian expressed "grave concern" and called on the Solomon Islands government "to take all necessary measures to protect the safety of Chinese citizens and organisations."

The unrest has been sparked by pandemic-fueled economic frustrations and a long-running rivalry between residents of the country's most populous island Malaita and the Guadalcanal-based central government.

In the late 1990s Guadalcanal militants launched attacks on settlers, particularly targeting those from Malaita, and for five years unrest plagued the country.

The so-called "Tensions" only eased with the deployment of an Australian-led peacekeeping mission – named the Regional Assistance Mission to the Solomon Islands.

Australian Prime Minister Scott Morrison said the latest Australian deployment was expected to last "a matter of weeks," unlike Canberra's previous peacekeeping mission, which ran from 2003 to 2017 and cost about $2.2 billion.

"It is not the Australian government's intention in any way to intervene in the internal affairs of the Solomon Islands, that is for them to resolve," he said. "Our purpose here is to provide stability and security."

Malaita residents continue to complain that their island is neglected by the central government.

Since 2019 the feud has been turbocharged by a row over Sogavare's decision to abruptly break diplomatic relations with Taiwan and recognize Beijing.

Malaita authorities opposed the move and defiantly maintained contact with the Taiwan authorities. As a result the province continues to receive outsized aid from Taipei and Washington.

The province's premier Daniel Suidani has accused Sogavare of being in Beijing's pocket, alleging he had "elevated the interest of foreigners above those of Solomon Islanders."

"People are not blind to this and do not want to be cheated any more," he said.

"Political competition doesn't trigger a riot in Honiara," said Mihai Sora, an expert on the Pacific at Australia's Lowy Institute.

"But the actions of these great powers – while they curry favor with individual political actors – have a destabilizing effect on what is already a fragile and vulnerable country."

"Then of course the contemporary context is one of extended economic hardship due to COVID-10 restrictions, a COVID-19 state of emergency," he told Agence France-Presse (AFP). "The health and economic impacts of COVID-19 have only added to the pressures that any developing country was facing before the pandemic hit."