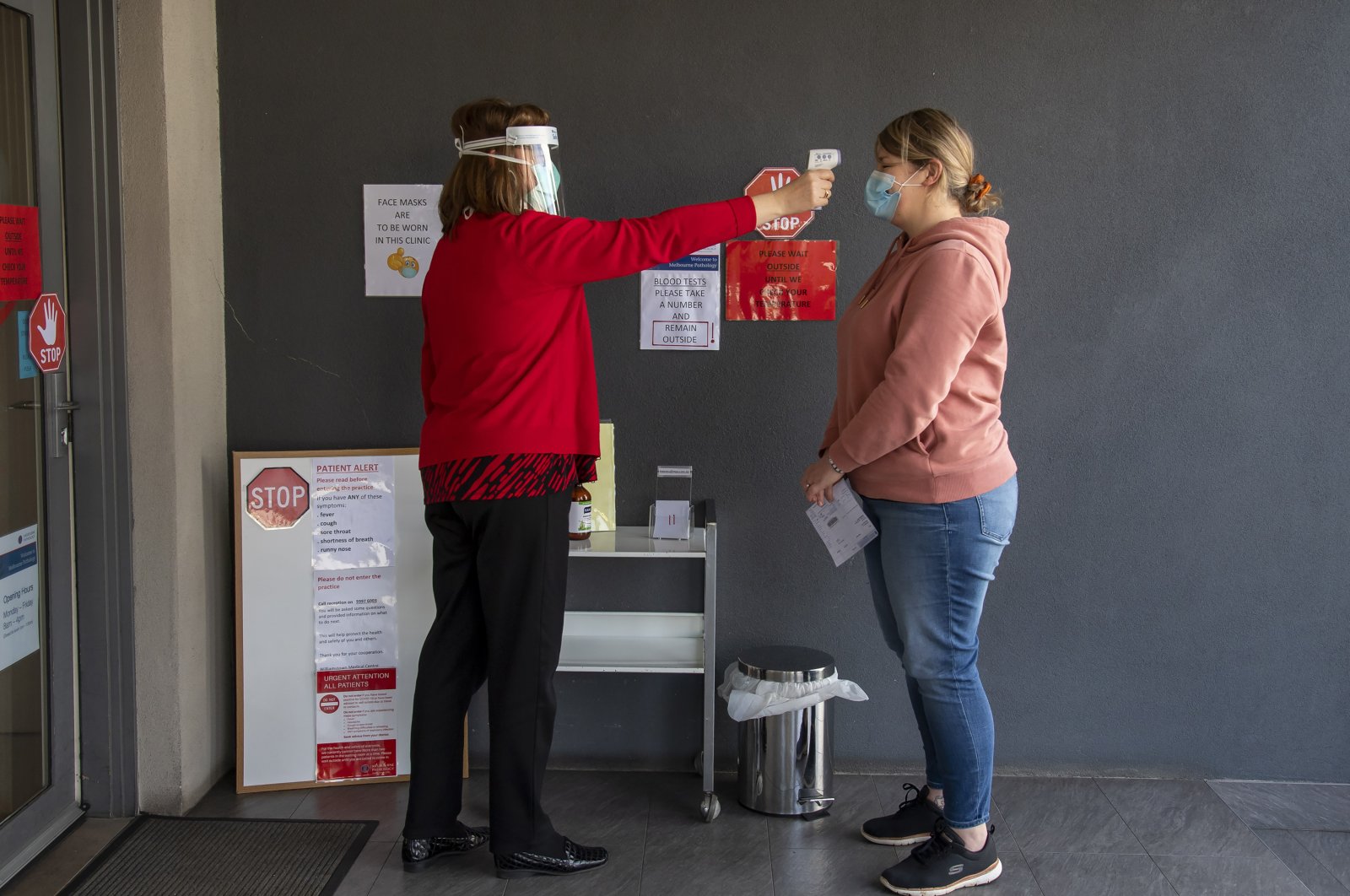 A patient has her temperature checked at a medical clinic during lockdown due to the continuing spread of the coronavirus in Melbourne, Aug. 6, 2020. (AP Photo)
by REUTERS Sep 15, 2020 9:48 am
RECOMMENDED

Australia on Tuesday recorded its first day without a COVID-19 death in two months, as states began to lift restrictions amid growing confidence that a second wave of infections has been contained.

While officials said there were 50 COVID-19 cases in the past 24 hours, a small increase from a day earlier, Australia reported no fresh fatalities for the first time since July 13.

Most of the new cases were in Victoria, Australia's second-most populous state, which has accounted for about 75% of the country's COVID-19 infections.

Still, with infections falling in regional areas of Victoria, state Premier Daniel Andrews announced social distancing restrictions in those areas would be eased late on Wednesday.

Outdoor gatherings of up to 10 people will be permitted, residents of a household will now be allowed to visit one other home, and cafes will be able to seat up to 50 people outside.

"We have driven case numbers down to very low numbers in regional Victoria. That's taken some time. We stayed the course and now we can open up," Andrews told reporters in Melbourne.

"That should be something that I think inspires confidence and a real sense of hope that the same thing can be achieved to the best of our ability across metropolitan Melbourne."

The dwindling case numbers in Victoria comes nearly seven weeks after about 5 million people were ordered to abide by a stringent lockdown after COVID-19 cases peaked at more than 700 in one day.

Melbourne, Australia's second-largest city, is on an extended hard lockdown until Sept. 28, though authorities have also begun easing curbs there. From Monday, residents were allowed to leave their homes for longer periods for exercise and authorities shortened a nightly curfew.

South Australia, one of the remaining states and territories to effectively eliminate the virus, said it will restore travel links with the Australian Capital Territory surrounding Canberra.

Australia has reported just over 26,700 coronavirus cases and 816 deaths.

With the numbers of COVID-19 cases falling, Australia's Prime Minister Scott Morrison has turned to reviving an ailing national economy, unveiling a series of policies to lower the price of gas to fuel a manufacturing recovery.

"We continue to do better than almost every other developed country in the world when it comes to protecting lives and livelihoods," Morrison said in a speech in Newcastle, 161 kilometers (100 miles) north of Sydney.

"If we are shut, we are not living alongside the virus, the virus is actually keeping us from living."