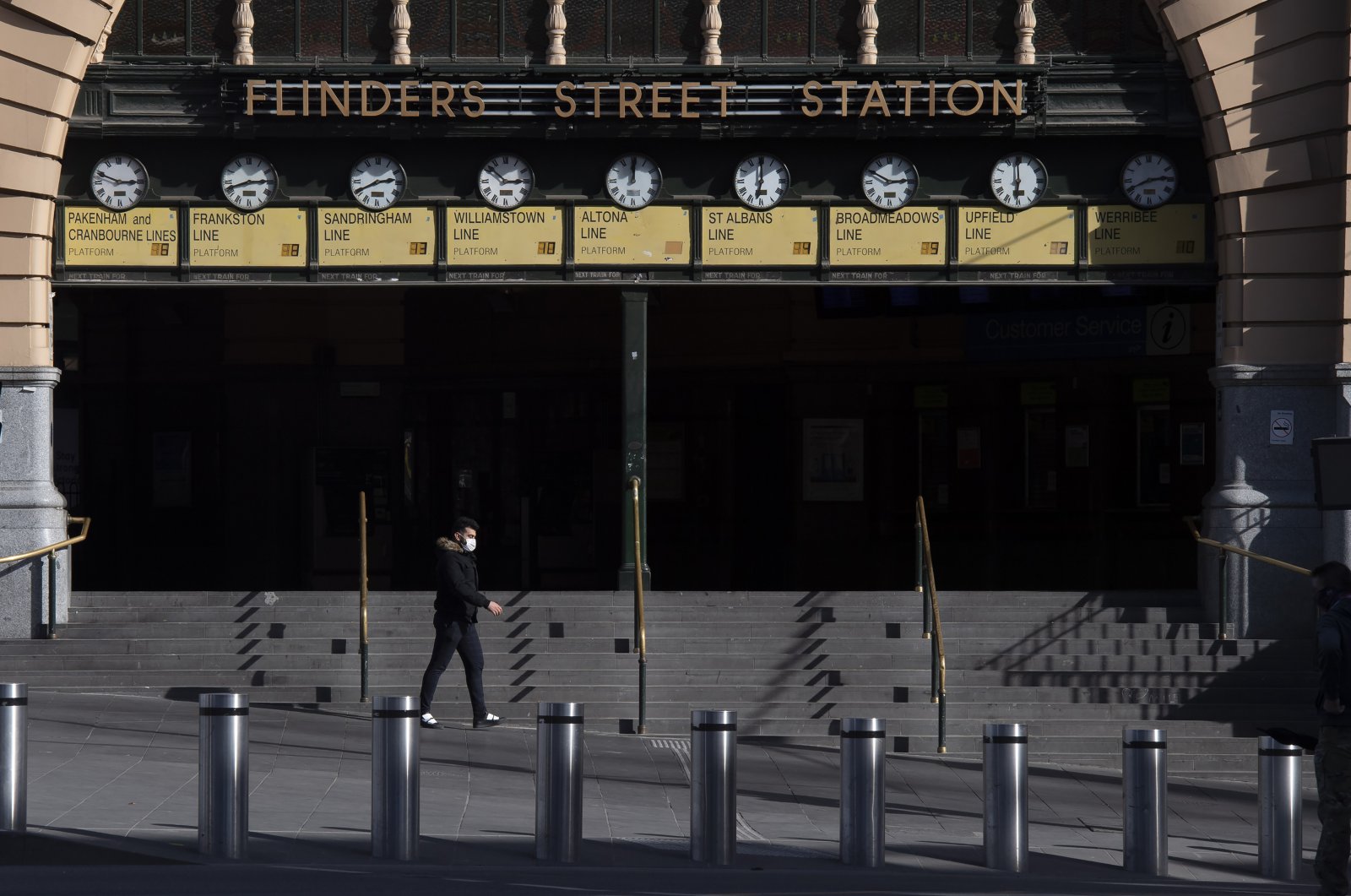 Flinders Street Station is quiet during lockdown due to the continuing spread of the coronavirus in Melbourne, Australia, Aug. 6, 2020. (AP Photo)
by REUTERS Sep 06, 2020 10:33 am
RECOMMENDED

Australia's coronavirus hot spot state of Victoria on Sunday extended a hard lockdown in its capital Melbourne until Sept. 28, as the infection rate has declined more slowly than hoped. "We cannot open up at this time. If we were to we would lose control very quickly," State Premier Daniel Andrews told a televised media conference on Sunday.

The hard lockdown was ordered on Aug. 2 in response to a second wave of infections that erupted in Melbourne.

Australia's second-most populous state has been the epicenter of a second wave of the coronavirus, now accounting for about 75% of the country's 26,282 cases and 90% of its 753 deaths.

Victoria on Sunday reported 63 new COVID-19 infections and five deaths, down from a peak of 725 new cases on Aug. 5. In contrast, Australia's most populous state, New South Wales, has had no more than 13 cases a day since early August.

Melbourne's Stage 4 restrictions, which had been due to end on Sept. 13, shut most of the economy, limited people's movements to a tight zone around their homes for one hour a day and imposed a night-time curfew.

From Sept. 14, the rules won't be quite as tough, as the curfew will begin an hour later at 9 p.m, and people can go outdoors for two hours instead of one, while those living alone will be allowed to have a visitor.

If the infection rate subsides as hoped by the end of September, Andrews said restrictions would be relaxed gradually over the subsequent two months, though some businesses would have to remain shut through late November.

Andrews said modeling showed cases would continue to average around 60 a day by next weekend, and if the state opened up too quickly it would be on track for a third wave by mid-November.

"You've got to defeat the second wave and do it properly. Otherwise, you just begin a third wave. A third wave will mean we can't do the economic repair that people desperately want us to do," Andrews said.

The federal government has blamed the lockdown in Victoria for dragging Australia deeper into its first recession in nearly 30 years, while other states have largely reopened their economies.

"Today's announcement from the Victorian government to extend lockdown arrangements will be hard and crushing news for the people of Victoria and a further reminder of the impact and costs that result from not being able to contain outbreaks of COVID-19," Prime Minister Scott Morrison said in a statement.

The pandemic has resulted in the loss of around 500,000 jobs in Victoria, including 250,000 under the Stage 4 restrictions.

Business groups were disappointed with the slow reopening outlined by Andrews.

"We can't continue to let business and jobs be decimated on the way to controlling the spread of the virus," Victoria Chamber of Commerce and Industry chief Paul Guerra told reporters.

After Sept. 28, if daily infection rates have dropped to between 30 and 50 for 14 days, child care, construction sites, manufacturing plants and warehouses will go back to normal, allowing 101,000 workers to return to their jobs.

Schools will also partially reopen and outdoor gatherings of up to five people would be allowed.

After Oct. 26, if daily cases have dropped below five, cafes and restaurants could reopen, mostly for outdoor service, and shops and hairdressers would reopen.

At the same time, the curfew would be lifted, with no limits on leaving home, outdoor gatherings could increase to 10 and homes would be able to have five visitors.

After Nov. 23, cafes, bars and restaurants could have more people indoors, schools could reopen more fully, museums and other entertainment venues could reopen, and larger gatherings would be allowed.

Restrictions in regional Victoria will be eased starting on Sept. 14.