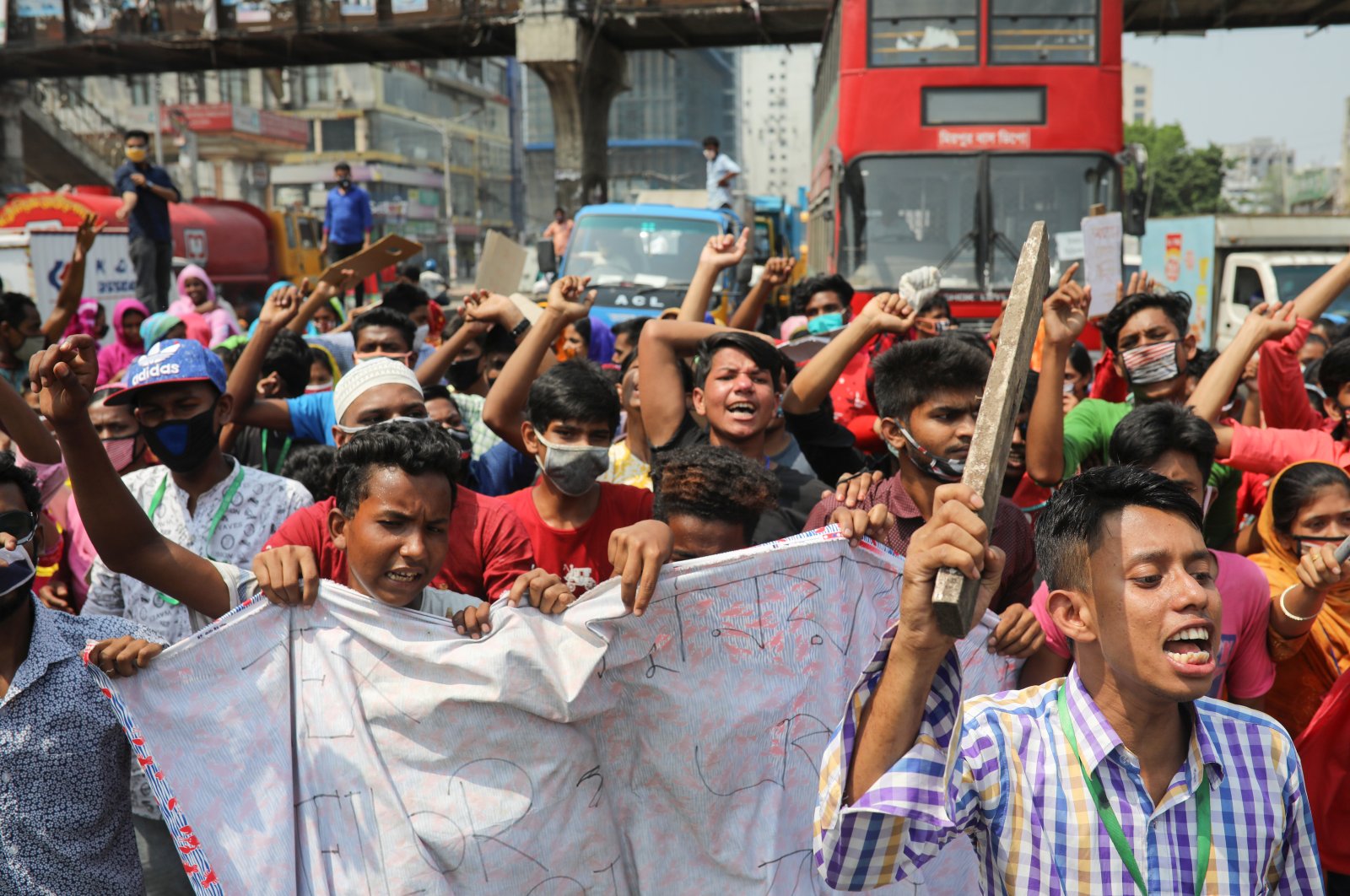 Garment workers block a road demanding their due wages during the lockdown amid concerns over the coronavirus disease (COVID-19) outbreak in Dhaka, Bangladesh, April 13, 2020. (Reuters Photo)
by REUTERS Apr 14, 2020 3:20 pm
RECOMMENDED

At least 10,000 garment workers have been sacked in Bangladesh as Western brands hit by coronavirus lockdowns cancel orders, union leaders said on Tuesday, urging the government to step in.

More than $3 billion worth of orders have been canceled or suspended, according to factory owners in Bangladesh, one of the world's top suppliers of clothes to Western countries.

"We found at least 10,000 workers from 37 factories who lost their jobs. The actual situation could be worse," said Kalpona Akter, founder of the Bangladesh Centre for Worker Solidarity, one of three unions that documented the job cuts.

"These workers won't get jobs anywhere else for the next two to three months. The factories must take them back and the government needs to ensure this," she added.

A senior employment ministry official said the government had asked factory owners not to cut jobs.

"We will assess the report and take the required steps to protect our workers," K.M. Ali Azam, secretary of the ministry, told the Thomson Reuters Foundation.

Bangladesh ranks behind only China as a supplier of clothes to Western countries. The garment industry accounts for more than 80% of its exports and employs about 4 million people, mostly women.

Hundreds of workers took to the street this week, defying a government lockdown to protest the nonpayment of wages, according to police.

Fatima said she had been fired at the end of March and had still not received her pay for the month.

"It was shocking. One minute I was working, the next I was fired. I still don't know when I will get paid," said the 26-year-old, who gave only one name. "I have a son to take care of. I don't know what to do."

The government has announced a $588 million package to help the crucial export sector pay its workers, but labor leaders say that this is not enough.

Rubana Huq, president of the Bangladesh Garment Manufacturers and Exporters Association, said owners had been asked not to let workers go.

"Some have listened. Only a few have not," said Huq. "Times are tough; we have nevertheless asked all factories not to retrench."

Fashion retailer Primark has pledged to keep paying workers affected by its decision to cancel orders, while H&M said it was working with other companies to support garment workers in the countries that supply its clothes.

"If Western buyers and owners don't come forward to support workers, it's going to be a disaster," she said.