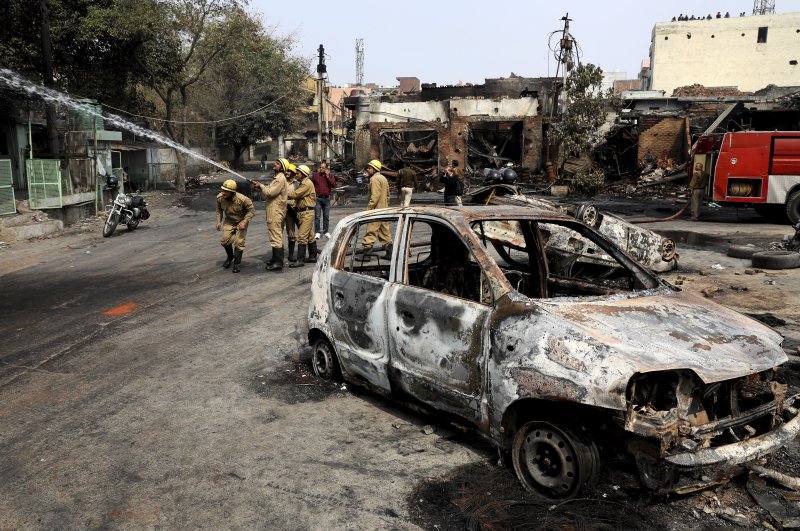 India’s capital has witnessed the worst sectarian violence seen in decades after the two days of unrest has claimed at least 23 lives following deadly clashes. Riot police patrolled the streets of India's capital on Wednesday and the city's leader called for a curfew after protests against a contentious anti-Muslim citizenship law have descended into running battles between Hindus and Muslims. This was the first time that the protests have set off major bloodshed.

Delhi's chief minister, Arvind Kejriwal, called Wednesday for the army to be deployed and for a curfew to be imposed over flashpoint northeastern districts. "Police, despite all its efforts, (are) unable to control situation and instill confidence," Kejriwal tweeted on Wednesday morning. "Army (should) be called in and curfew imposed."

While U.S. President Donald Trump and his host, Indian Prime Minister Narendra Modi, discussed geopolitics and lunched together in another part of the capital, the violence has raged in pockets of northeast Delhi that have a large Muslim population.

Local TV channels showed huge clouds of smoke billowing from a tire market that had been set ablaze, and Reuters witnesses saw mobs wielding sticks and stones walking down streets in parts of northeast Delhi amid further incidents of stone-throwing. Some of those protesting the citizenship law alleged that Modi’s ruling Bharatiya Janata Party (BJP) and its supporters were targeting Muslims and instigating the violence. “We have no weapons, but they are firing at us,” said Mohammad Shakir, a demonstrator opposed to the law, as reported by Reuters. “This BJP is targeting Muslims. They want to turn India into a Hindu country.”

Amid ongoing clashes over the anti-Muslim citizenship law, a mosque was set on fire on Tuesday in India’s northeast Delhi, revealing escalating violence against Muslims in the country. According to local reports, the Ashok Nagar Delhi Mosque was surrounded by angry mobs shouting ultranationalist Indian slogans while placing a “Hanuman flag” on the top of the mosque. Two Indian journalists were allegedly attacked by a mob when they were reporting about the burning mosque, as reported by the Week.

India’s capital has been a focus of unrest against the Citizenship Amendment Act (CAA), which makes it easier for non-Muslims from three neighboring Muslim-dominated countries to gain Indian citizenship. Protests have broken out across India since the law came into force in December, leaving at least 30 people killed in clashes with police in December, mostly in the northern state of Uttar Pradesh.

The citizenship bill’s passage follows a contentious citizenship registry exercise in Assam intended to identify legal residents and weed out those in the country illegally. In 2018, the Indian government excluded more than 4 million people from a draft list of citizens in the border state of Assam, mostly Bengali-speaking Muslims who could not produce valid documents. The move created fear among Muslims who believe that their fundamental rights as Indian citizens are at risk.