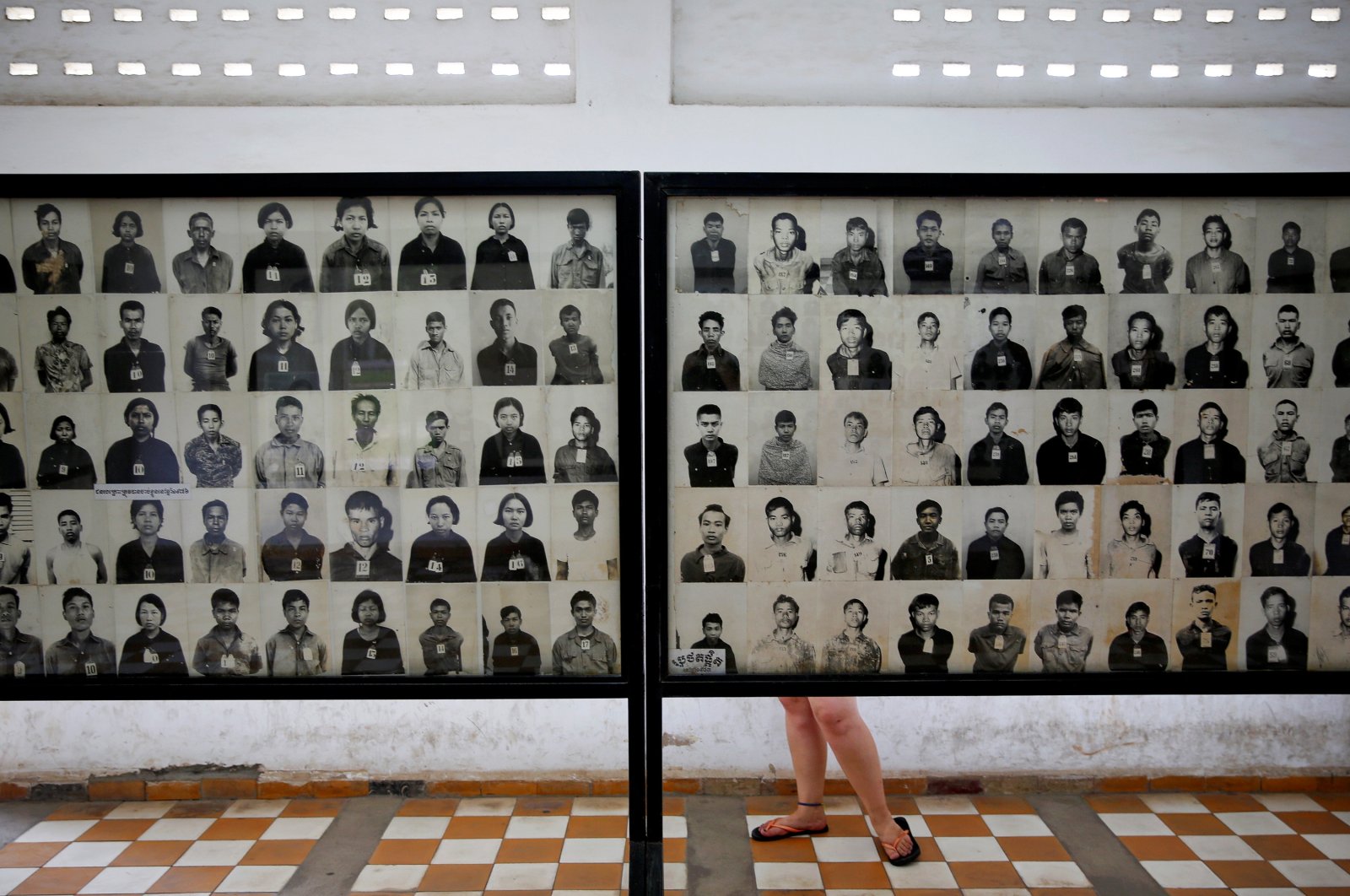 A visitor looks at pictures of victims of the Khmer Rouge regime at the former notorious Tuol Sleng prison that is now the Genocide Museum, in Phnom Penh, Cambodia, Aug. 5, 2014. (Reuters File Photo)
by FRENCH PRESS AGENCY Apr 11, 2021 6:02 pm
RECOMMENDED

The ultra-Maoist Pol Pot-led Khmer Rouge installed a reign of terror from 1975 to 1979 that left an estimated two million Cambodians dead from starvation, hard labor, torture and mass executions.

The brutal regime took photographs of thousands of its victims, including those sent to Tuol Sleng or S-21, a former Phnom Penh high school that was converted into a prison.

An estimated 15,000 people were interrogated and tortured there before being put to death in a neighboring field.

Artist Matt Loughrey has been adding color to the black and white photos of victims as part of a personal project, but claims that he added smiles to some of those killed have provoked a backlash.

A selection of the images and an interview with Loughrey was published on the Vice news website over the weekend, attracting a torrent of criticism both within Cambodia and social media.

"I'm talking with the museum about making these photos accessible to everybody," the artist said in the Vice interview, adding that the project had seen a "superb response" so far.

The article appeared to have been pulled from the website on Sunday afternoon.

Earlier, Vice added a disclaimer to the article before it was removed.

"It has been brought to our attention that the restored portraits published in this article were modified beyond colorization. We are reviewing the article and considering further actions to correct the record," Vice said in an editor's note.

Agence France-Presse (AFP) has contacted Loughrey for a response.

Norng Chan Phal, a S-21 survivor who lost parents at the prison, characterized Loughrey's project as "an insult to the victims of Khmer Rouge."

"I strongly condemn these colourized pictures because all victims at S-21 were never happy," Norng Chan Phal, 52, told AFP.

"We the victims who entered S-21 never had a chance to smile. I don't support any changes to the pictures. We were suffering."

Cambodia's Ministry of Culture and Fine Arts said it considered Loughrey's manipulation of the images to "seriously affect the dignity of the victims" as well as the reality of the country's history.

It said the Loughrey's project also violated the rights of the Tuol Sleng Genocide Museum as the lawful owners and custodians of the images.

The ministry called for Loughrey and Vice to remove the doctored pictures.

"(The ministry) will consider to take legal action (both national and international) if Matt Loughrey does not comply with the above request," the ministry said in a statement.

Hun Many, a Cambodian lawmaker and youngest son of the country's leader Hun Sen said he was shocked to see the doctored images.

"It clearly shows that those individuals, especially foreigners do not understand the painful tragedy of the Cambodia nation and particularly the victims who suffered from torture and killings at Tuol Sleng prison," he wrote on Facebook.