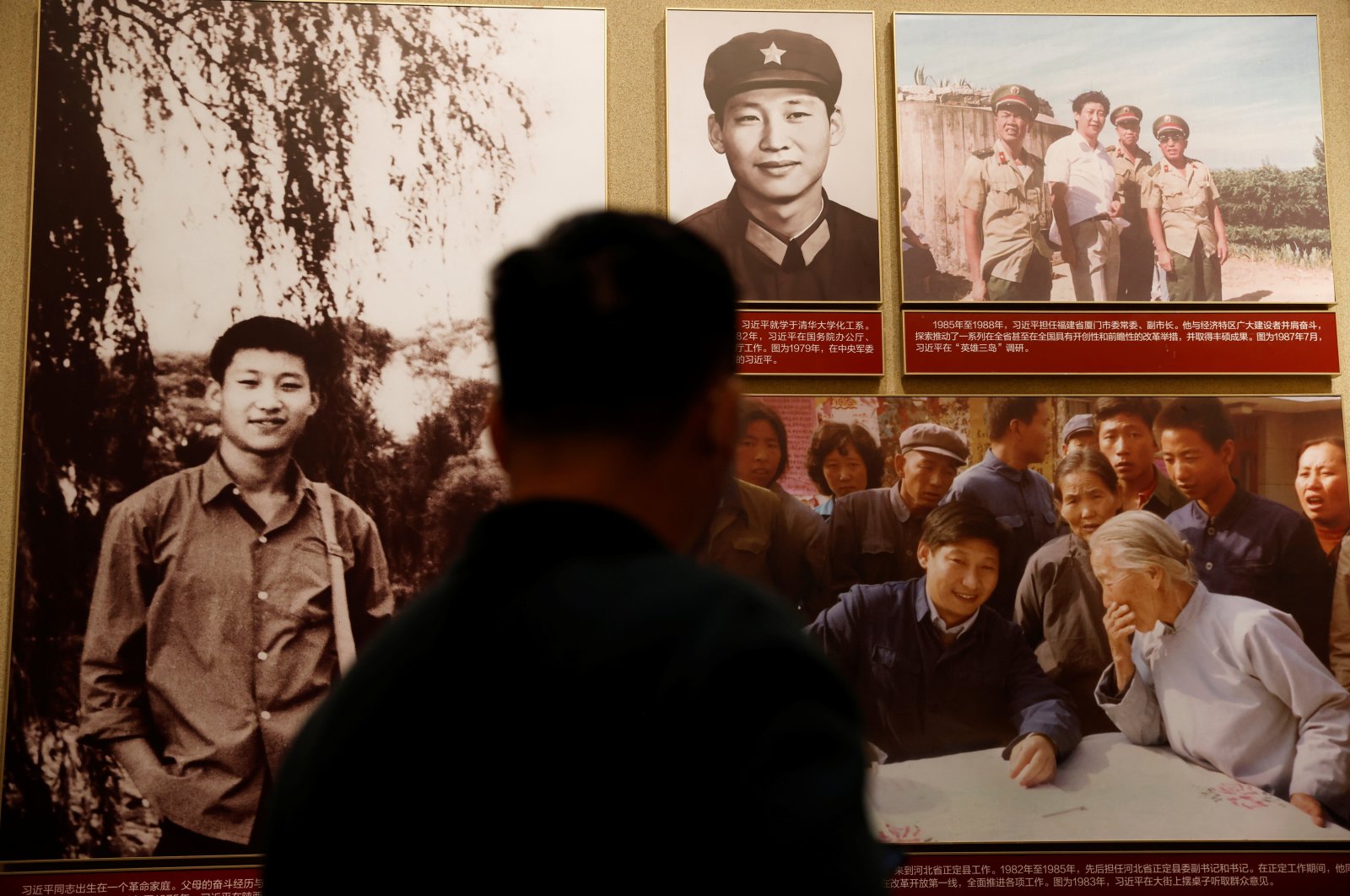 A man stands in front of images of Chinese President Xi Jinping displayed at the Museum of the Communist Party of China in Beijing, China, Nov. 11, 2021. (Reuters Photo)
by French Press Agency - AFP Nov 11, 2021 4:29 pm
RECOMMENDED

Top Communist Party leaders wrapped up a key meeting in Beijing by passing an important resolution on the country's past, state media said Thursday, which is expected to cement President Xi Jinping's grip on power.

Xi, the uncontested leader of the world's most populous nation, has been heading a pivotal plenary of the ruling party's top figures since Monday in the Chinese capital.

Some 350 members of the powerful Central Committee passed China's resolution on "Major Achievements and Historical Experience of the Party's Centennial Struggle" – only the third of its kind in its 100-year history.

The previous two resolutions were issued under former leaders Mao Zedong, in 1945, and Deng Xiaoping, in 1981.

The lengthy declaration called for upholding "the correct view of party history," said official news agency Xinhua, adding that the party has "written the most magnificent epic in the history of the Chinese nation for thousands of years."

This year's closed-door plenum paves the way for the 20th party congress next autumn, at which Xi is widely expected to be handed a third term in office, securing his position as China's most powerful leader since Mao.

Analysts say the resolution will help Xi shore up his grip on power by setting in stone his vision for China and diminishing the role of previous leaders.

The "thought" of Xi "is the epitome of Chinese culture and soul," the text reads, saying that his presence at the "heart" of the ruling party "is of decisive importance ... to promote the historic process of the great rejuvenation of the Chinese nation."

Jean-Pierre Cabestan of the Baptist University of Hong Kong said the party is "rewriting its past in order to shape the future around Xi Jinping."

He predicted that there would be an "even greater form of taboo" on the dark days of Chinese history as a result.

Xi's tenure has been marked by a sprawling anti-corruption crackdown, repressive policies in regions like Xinjiang, Tibet and Hong Kong, and an increasingly assertive approach to foreign relations.

He has also created a leadership cult that has quashed criticism, stamped out rivals and dissent and introduced his own political theory – dubbed "Xi Jinping Thought" – to school students.

State TV showed footage of Xi addressing delegates in the Great Hall of the People near Tiananmen Square, in front of red flags and the communist hammer and sickle.

Its evening news broadcast said Xi's communique was of "wide-ranging historical significance," and teased a forthcoming commentary titled "Winning even greater victory and glory in the new journey of the New Era" in the party's flagship newspaper.

The newspaper has published numerous front-page tributes to Xi's achievements in recent weeks.

The first resolution on the party's history, passed under Mao, helped him cement his authority over the Communist Party four years before it seized power.

Under Deng Xiaoping, the second resolution saw the regime adopt sizeable economic reforms and recognize the "mistakes" of Mao's ways.

'Charting the course of history'

Unlike the 1981 declaration, Thursday's communique appears to gloss over the violence of the Cultural Revolution, a devastating period of upheaval in the last decade of Mao's rule that scarred the country's psyche.

Instead, it refers to the period as one of "socialist revolution and construction."

Xi has recently overseen his own clampdown on many aspects of Chinese society, including pop culture, education, the country's tech sector businesses and wealthy tycoons.

Chairman Mao is mentioned seven times in the communique, and Deng only five times.

In comparison, Xi Jinping – who Xinhua this week said was "undoubtedly the core figure in charting the course of history" – is mentioned 17 times.

"As we expected even though they haven't used the three words 'leader for life,' they have devoted almost half of the communique to Xi Jinping's achievements," said Willy Lam, a Hong Kong-based political analyst.

"I think it is now widely taken for granted that he will remain leader for life, but putting down those three words or four words ... could arouse opposition."

Lam said Xi ruling for life after he made sweeping constitution changes in 2018 is still "a controversial issue in the party."