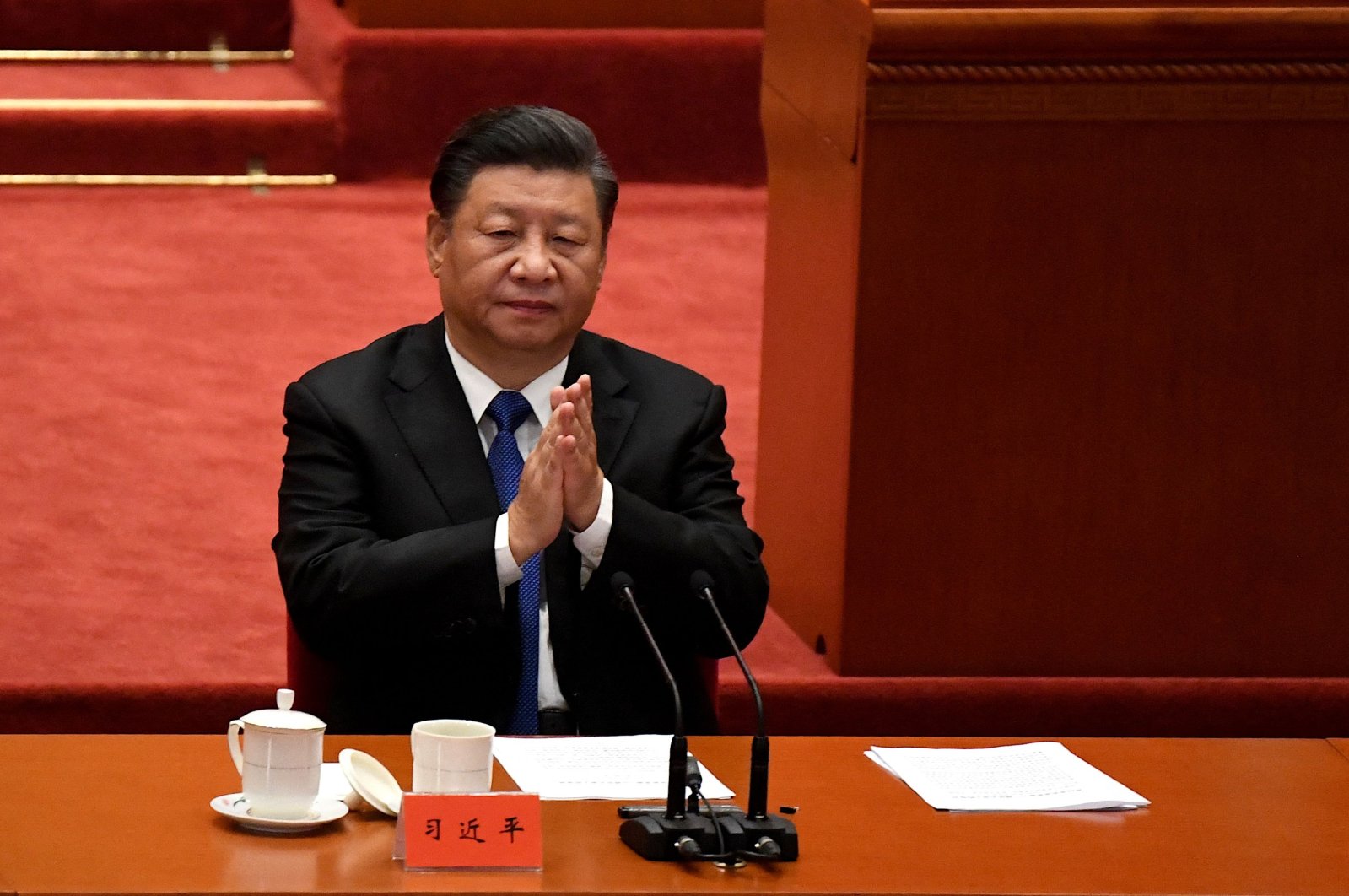 Chinese President Xi Jinping attends the commemoration of the 110th anniversary of the Xinhai Revolution, which overthrew the Qing Dynasty and led to the founding of the Republic of China, at the Great Hall of the People in Beijing, China, Oct. 9, 2021. (AFP Photo)
by REUTERS
Oct 09, 2021 8:40 am

Chinese President Xi Jinping vowed on Saturday to realize a peaceful "reunification" with Taiwan, taking care to not directly mention the use of force after a week of tensions with the Chinese-claimed island sparked international concern.

Taiwan responded shortly thereafter by calling on Beijing to abandon its coercion, reiterating that only Taiwan's people could decide their future.

Democratically ruled Taiwan has come under increased military and political pressure from Beijing to accept its sovereignty, but Taipei has pledged to defend its freedom.

Speaking at Beijing's Great Hall of the People, Xi said the Chinese people have a "glorious tradition" of opposing separatism.

"Taiwan independence separatism is the biggest obstacle to achieving the reunification of the motherland, and the most serious hidden danger to national rejuvenation," he said on the anniversary of the revolution that overthrew the last imperial dynasty in 1911.

Peaceful "reunification" best meets the overall interests of the Taiwanese people, but China will protect its sovereignty and unity, he added.

"No one should underestimate the Chinese people's staunch determination, firm will, and strong ability to defend national sovereignty and territorial integrity," Xi said. "The historical task of the complete reunification of the motherland must be fulfilled, and will definitely be fulfilled."

He struck a slightly softer tone than in July, his last major speech mentioning Taiwan, in which he vowed to "smash" any attempts at formal independence. In 2019, he directly threatened to use force to bring the island under Beijing's control.

Still, the speech was poorly received in Taiwan.

The presidential office said they were a sovereign independent country, not part of the People's Republic of China, and had clearly rejected China's offer of "one country, two systems" to rule the island.

"The nation's future rests in the hands of Taiwan's people," the office said.

In a separate statement, Taiwan's China-policy making Mainland Affairs Council called on Beijing to "abandon its provocative steps of intrusion, harassment and destruction" and to return to talks.

China's air force mounted four straight days of incursions into Taiwan's air defense identification zone from Oct. 1, involving close to 150 aircraft, though those missions have since ended. Xi made no mention of those flights.

Taiwan says it is an independent country called the Republic of China, its formal name. The Republic of China was established in 1912 and its government fled to Taiwan in 1949 after losing a civil war with the Communists, who set up today's People's Republic.

Taiwan marks Oct. 10, when the anti-imperial revolution began in China, as its national day, and President Tsai Ing-wen will give a keynote address in Taipei on Sunday.

China commemorates the revolution by harking back to republican leader Sun Yat-sen's calls for patriotism, national rejuvenation and good governance.

Xi used the speech to underscore the need for "a strong force to lead the country, and this strong force is the Chinese Communist Party."

"Without the Chinese Communist Party, there would not be a New China, and therefore no rejuvenation of the Chinese people," he said.

Xi has tightened party control in all aspects of life and is almost certain to break protocol and stay on as Communist Party boss for a third term late next year, when a congress will elect a new leadership for the following five years.