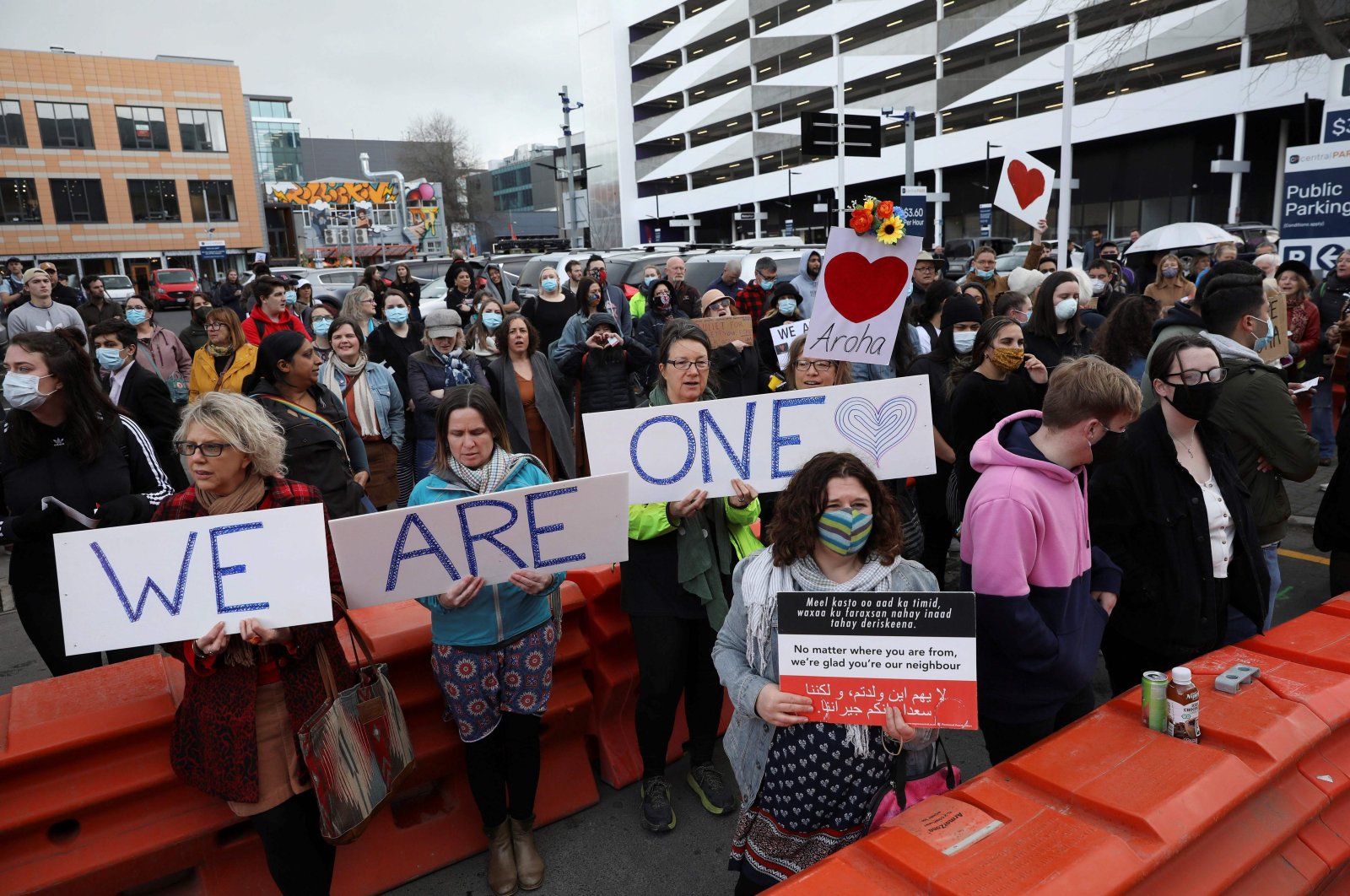 Members of the public gather in front of the High Court to support relatives of victims killed in the 2019 twin mosque shootings during the last day of the sentencing hearing for Brenton Tarrant, the terrorist who massacred 51 people in the attacks, in Christchurch, New Zealand, Aug. 27, 2020. (AFP Photo)
by agencies Aug 27, 2020 9:10 am
RECOMMENDED

The terrorist who slaughtered 51 worshippers at two New Zealand mosques was sentenced Thursday to life in prison without the possibility of parole, the first time the maximum available sentence has been imposed.

Judge Cameron Mander said the crimes committed by 29-year-old Australian Brenton Harrison Tarrant were so wicked that a lifetime in jail could not begin to atone for them. He said they had caused enormous loss and hurt and stemmed from a warped and malignant ideology.

Tarrant will die in jail under the life sentence. He killed 51 Muslim worshippers with high-powered guns during Friday prayers at two Christchurch mosques in March 2019.

"Finally justice has been served," said Hina Amir, on the phone from her living room a few suburbs away from the street front of Al Noor mosque where she and her husband Amir Daud survived a hail of Tarrant's bullets in their car.

Together on their lounge, they watched a livestream of three emotional days of sentencing proceedings, as other survivors and relatives confronted Tarrant directly in court and asked he never be released.

"It's a relief," said Amir, 34. "You feel angry, anxious, mixed with a feeling that this guy maybe – maybe – he's regretting his actions, which we can't guess because he was so emotionless," she said.

Also on Amir's mind this week was Tarrant's mother.

"She's a mother," she said. "Whatever your kid will do, he is your child. That is a kind of a feeling I've had for the last three days."

Outside the courthouse, the sentence was greeted with cheers.

Abdul Alabi Lateef, imam of the second mosque that Tarrant attacked, said justice had been done. Gamal Fouda, imam of Al Noor mosque, where 44 people were slain, said no punishment would bring lost loved ones back.

Tarrant has admitted his crimes and said through his lawyer that he did not oppose the sentence. He made no reaction when it was handed to him in court.

Earlier in the week, Hamimah Tuyan, whose husband Zekeriya Tuyan was killed at Al Noor, said the rampage had left behind 34 spouses, 92 children and more than 100 siblings. That network extends across the world, with those bereaved by Tarrant tuning in from Bangladesh and Pakistan as well as Australia.

"This monster deserves the death penalty," said Sarwar Hossain, brother in law of Mohammad Omar Faruk, 36, who was killed at Al Noor mosque.

"He has shown no remorse for what he has done. He killed 51 innocent people and wanted to kill more. It is still good he will never be free again," he said.