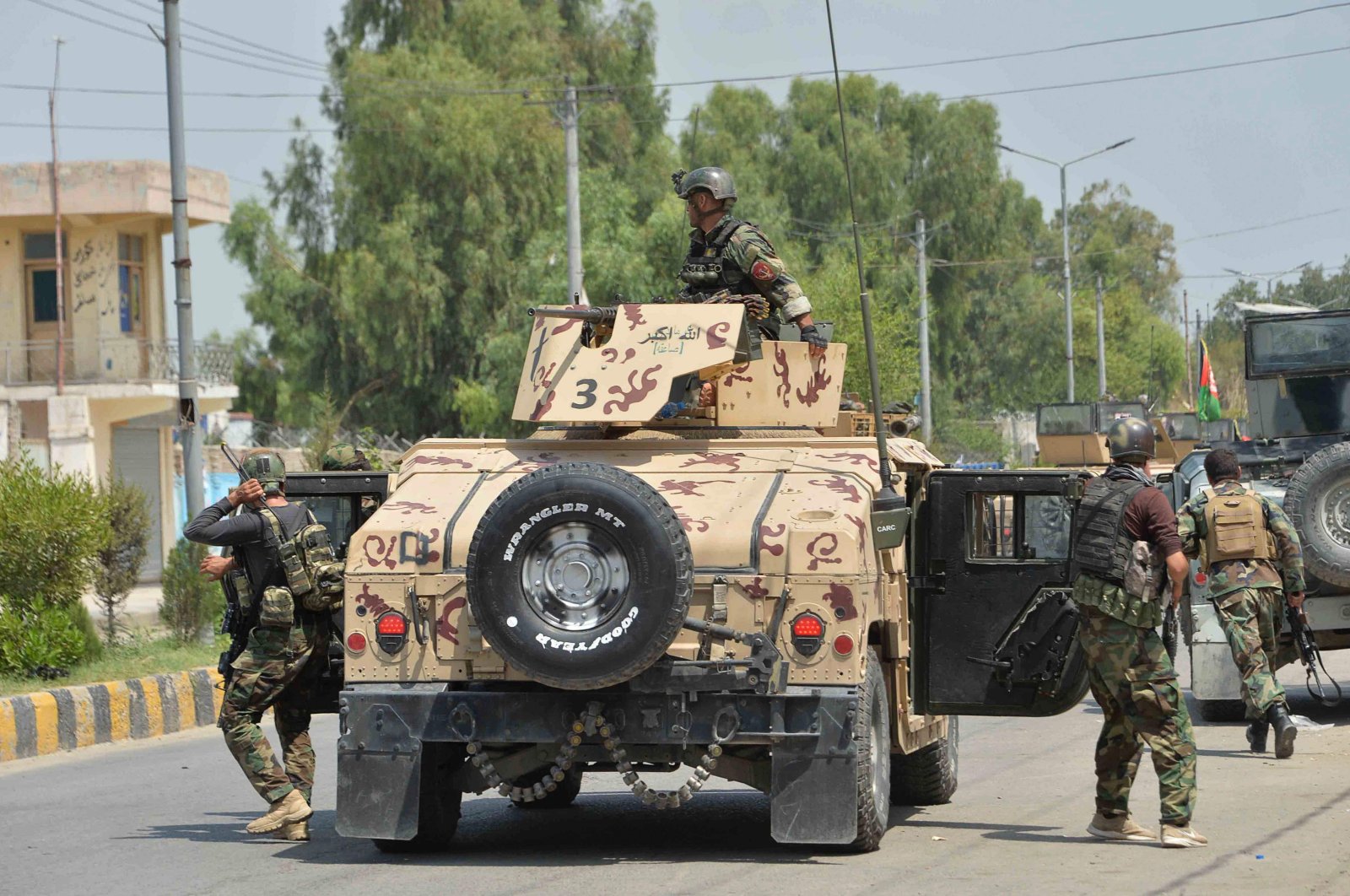 Afghan soldiers arrive in a Humvee vehicle outside a prison during a raid in Jalalabad, Afghanistan, Aug. 3, 2020. (AFP Photo)
by Agencies Aug 06, 2020 4:17 pm
RECOMMENDED

At least 10 insurgents were killed in clashes between Afghan forces and the Taliban in eastern Afghanistan, officials said Thursday, the first time authorities have confirmed direct fighting since a recent cease-fire expired.

According to defense ministry spokesman Fawad Aman, two clashes broke out Wednesday in the eastern province of Ghazni. Aman told Agence France-Presse (AFP) that 10 Taliban insurgents had been killed.

"Their attacks were repelled, and they suffered casualties," Aman said.

Waheedullah Jumazada, the spokesman for the Ghazni provincial governor, confirmed the two clashes. In one attack near Ghazni city, Afghan forces called in an airstrike when Taliban fighters raided an army base housing about 300 government troops.

The Taliban and government forces agreed on a three-day truce to mark the Muslim festival of Qurban Bayram, also known as Eid al-Adha, which started last Friday. The truce came ahead of expected peace talks between the Taliban and Kabul aimed at ending the 19-year-old conflict that has ravaged the country.

Another disagreement between the Taliban and Kabul erupted Thursday after Afghanistan officials said a traditional consultative council will convene Friday to decide whether the last 400 Taliban prisoners will be released as part of a peace agreement, even as its Health Ministry says half of Kabul's residents are infected with the coronavirus.

The Taliban have rejected any changes to the deal they signed in February with the U.S.

That deal calls for 5,000 Taliban prisoners to be freed by Kabul and the Taliban to free 1,000 government personnel, including security officials, ahead of the start of intra-Afghan negotiations to map out a framework for a future Afghanistan. The release of the 400 prisoners is the final hurdle to the start of negotiations.

The Taliban have freed the 1,000 prisoners they were holding, and U.S. and NATO soldiers have already begun withdrawing troops in line with the agreement. But Afghan President Ashraf Ghani has refused to free a final 400 Taliban prisoners, saying he needs a wider authority from a loya jirga, or traditional grand consultative council.

The 3,200 people who will be attending the meeting are the same elders and political leaders invited to a similar council meeting held last year. According to Ghani's spokesman, Sediq Sediqqi, the council will also decide "what kind of peace it wants."

The council is being held even as the government's health minister, Jawad Osmani, in a briefing this week said a survey suggested that at least half of Kabul's population has been infected with the coronavirus and at least 10 million people – or a third of all Afghans – have been infected. The official figures are grossly lower at nearly 37,000 confirmed cases since Kabul began keeping statistics in March.

Meanwhile, Ghani's critics have accused the president of stalling peace negotiations with the Taliban to retain power as president because it is widely speculated that negotiations could seek a neutral interim government. Ghani, who has insisted he will finish his five-year term, was elected in controversial presidential polls held last year. He and rival Abdullah Abdullah battled over the results, which Abdullah alleged were deeply flawed.

Washington intervened, warning the squabbling leaders to find a political compromise. That led to Abdullah being named to head peace efforts as head of a High Council for National Reconciliation.

Although silent for several days after Ghani announced the council meeting, Abdullah's adviser, Mujib Rahimi, on Thursday said if asked, Abdullah will head the council.

Last year's meeting was led by a close ally of Ghani's, Abdul Rasool Sayyaf, a deeply religiously conservative Kabul warlord who figured prominently in the 1980s war against the invading Soviet Union and an inspiration for the Philippine terrorist group Abu Sayyaf.

The Taliban have said they are ready to hold negotiations within a week of the final prisoners being released.

Since then, U.S. Secretary of State Mike Pompeo has held a video call with Taliban chief negotiator Mullah Abdul Ghani Baradar. The United Nations secretary-general's special representative to Afghanistan, Deborah Lyons, also held a meeting with Baradar on Wednesday, according to a tweet from Taliban political spokesman Suhail Shaheen. The Taliban have not attacked U.S. or NATO troops since the February signing of the deal with the Americans.