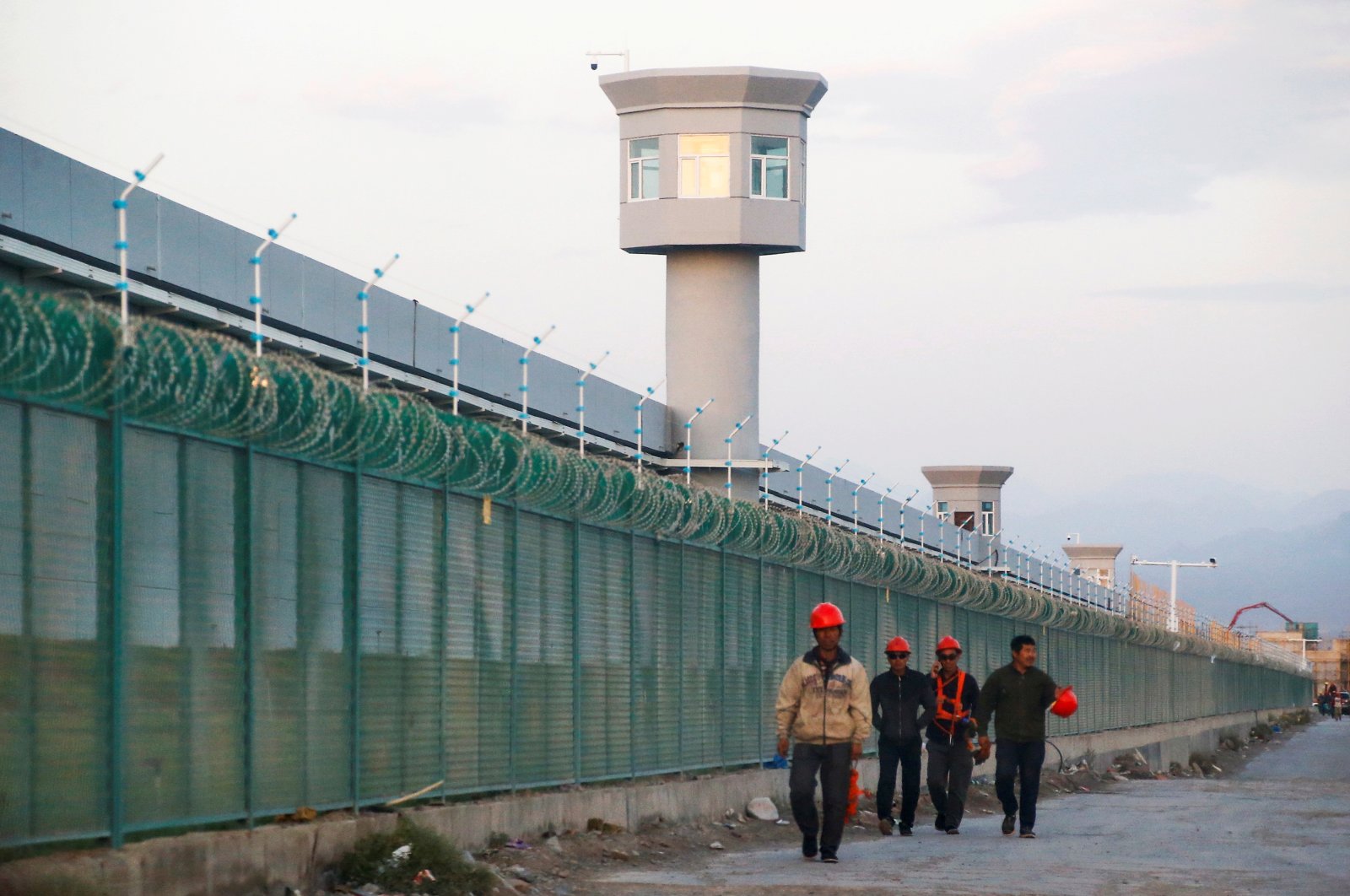 Workers walk by the perimeter fence of what is officially known as a vocational skills education center in Dabancheng, Xinjiang Uighur Autonomous Region, China, Sept. 4, 2018. (Reuters Photo)
by Agencies Dec 09, 2020 10:35 am
RECOMMENDED

Muslims in China's Xinjiang were "arbitrarily" selected for arrest by a computer program that flagged suspicious behavior, activists said Wednesday, in a report detailing big data's role in repression in the restive region.

A leaked list of more than 2,000 ethnic Uighur detainees in Xinjiang suggests the government used an expansive data collection project to arbitrarily detain Uighurs in the region, according to the U.S.-based Human Rights Watch (HRW).

The list from Xinjiang's Aksu prefecture, obtained by HRW, is of detainees flagged by a Chinese predictive policing program, called the Integrated Joint Operations Platform (IJOP), which collects data and identifies candidates for detention. The list from 2018 includes the names of Xinjiang Uighurs, phone numbers and reasons for detention in China's camp system, including studying the Quran, wearing religious clothing or traveling internationally.

"The Aksu list is the first time we have seen the IJOP in action in detaining people," said HRW's Maya Wang. It "provides further insights into how China's brutal repression of Xinjiang's Turkic Muslims is being turbocharged by technology," she said. HRW did not identify the source of the list, citing the person's safety, as reported by Reuters.

United Nations experts and advocates say at least 1 million ethnic Uighurs, who are mostly Muslim and speak a Turkic language, have been detained at some point in Xinjiang internment camps. China maintains that the heavily guarded centers are educational and vocational institutes aimed at stamping out terrorism and improving employment opportunities. It says all the people who attended have "graduated" and gone home. Access to the camps is restricted, and it is not possible to independently verify whether all the camps have closed.

HRW said it was able to confirm the identities of people on the list with Uighurs now living abroad, including the identification of 18 members of the same family.

The rights group said the list is further evidence that the government selected Xinjiang Uighurs for detention based on religion, personal relationships, contact with overseas relatives and even age. Other reasons for detention listed include activities like repeatedly switching off a smartphone, having "unstable thoughts" or "being generally untrustworthy."

Beijing has come under intense international criticism for its policies in the resource-rich territory. Surveillance spending in Xinjiang has ballooned in recent years, with facial recognition, iris scanners, DNA collection and artificial intelligence (AI) deployed across the province in the name of preventing terrorism. However, only around 10% of the people on the list were detained for the reasons of terrorism or extremism, HRW said. The list, parts of which were shown to Agence France-Press (AFP), described the reason for the detention of many of the people as simply being "flagged" by the integrated platform.

Separately, U.S.-based surveillance research firm IPVM said in a report Tuesday that Chinese telecoms giant Huawei had been involved in testing facial recognition software that could send alerts to police when it recognized Uighur minorities' faces.

An internal Huawei report cited by IPVM – which has been removed from the company's website but is still visible in Google searches – showed the software as passing tests for "Uighur alerts" and "recognition based on age, sex, ethnicity, angle of facial images." Huawei did not immediately reply to AFP's request for comment.