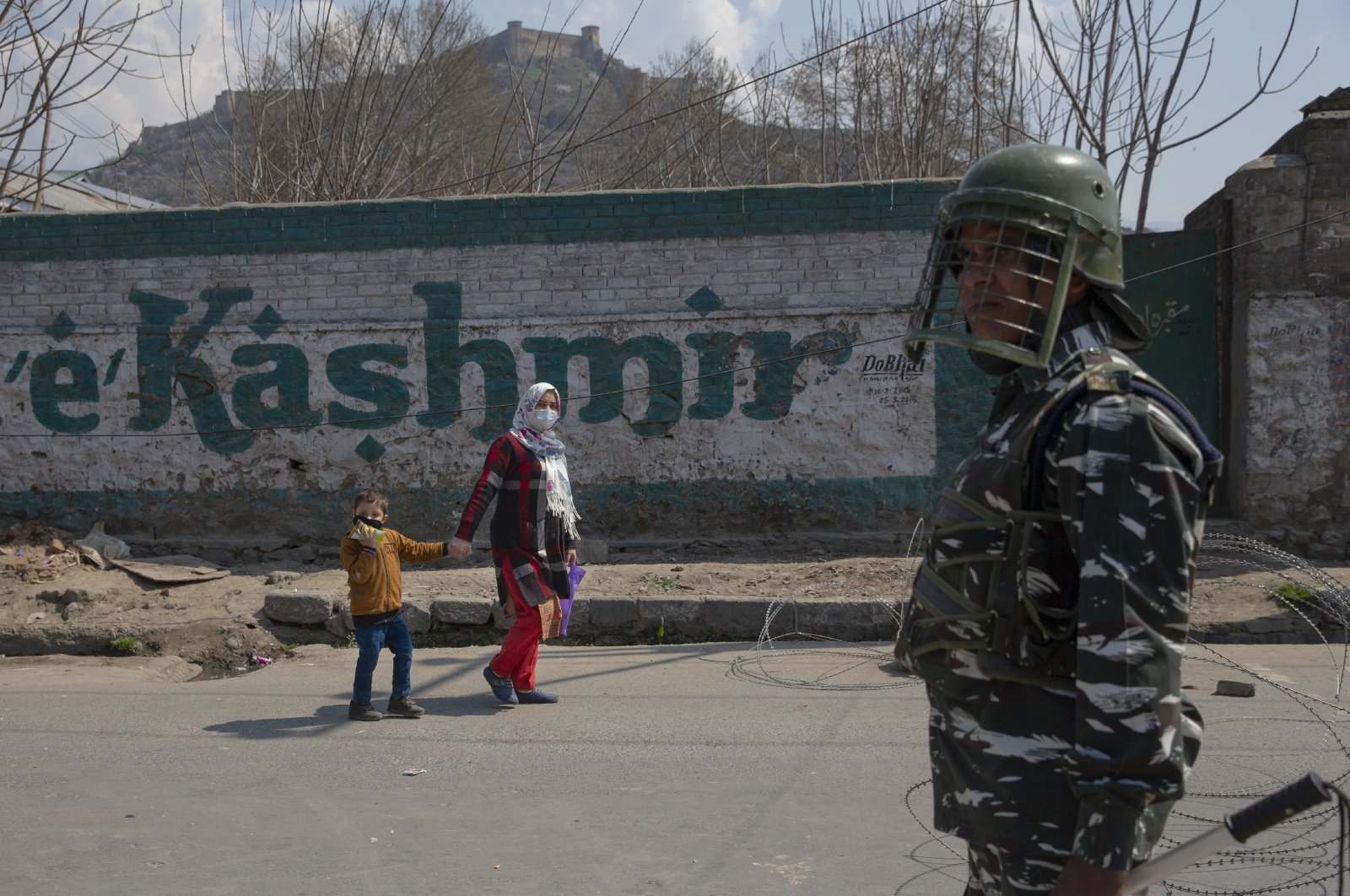 A Kashmiri woman along with her child walks past an Indian paramilitary soldier, Srinagar, Thursday, March 19, 2020. (AP Photo)
by Daily Sabah with Agencies Mar 19, 2020 3:41 pm

The already dire humanitarian situation in crisis-hit places – the disputed Kashmir, Yemen and Rohingya refugee camps – raises fear over the spread of the coronavirus

The concern for vulnerable people in the disputed Kashmir, war-torn Yemen and refugee camps in Bangladesh is growing as they could be especially at risk should the virus begin to spread locally, due to poor health facilities and infrastructure and worsening humanitarian situations.

Muslim-majority Kashmir has been relatively unaffected by the virus, reporting its first case on Wednesday evening. But the picturesque valley of 7 million is one of most militarized places on earth due to a decadeslong insurgency against Indian rule, and its residents have been subject to prolonged curbs on freedom of movement. An internet shutdown that began in August following sweeping constitutional changes in Kashmir has only just been eased.

India blocked roads in Kashmir on Thursday after the insurgency-torn region reported its first case, as several other parts of the country imposed restrictions on public gatherings in attempts to prevent its spread.

COVID-19 has yet to be documented in war-torn Yemen. "It is a perfect storm of a disaster should this virus introduce itself," the country's World Health Organization (WHO) representative, Altaf Musani, said.

The five-year conflict has killed more than 100,000 and unleashed a humanitarian crisis in which many others have died. Yemen's shattered health care infrastructure and already weakened population suggest the virus could wreak more havoc if it takes hold. Cholera, dengue, malaria and poor sanitation are rife and around 80% of Yemenis are reliant on humanitarian aid while millions live on the brink of starvation, leaving them vulnerable to other forms of the disease.

On both sides of the divide, Yemen has stepped up measures to contain and mitigate against the coronavirus should it appear, including screening and tracking arrivals.

Currently, Yemen has the capability to conduct a couple of hundred tests to confirm infection with the virus at centers in Sanaa and Aden. More are on the way so a few thousand people can be tested, the WHO's Musani said. Musani said the fragile health system operates at around 50% capacity and the emergence of the coronavirus would "greatly overstretch" it.

Only three coronavirus cases have so far been confirmed in refugee camps in Bangladesh as of March 13 as Rohingya refugees in the southern Cox's Bazaar district are distressed. "We are poor. We are stateless. We are dependent on the mercy of others," the community leader of the persecuted minority told Anadolu Agency.

He spoke of the vulnerable conditions they were living in – a breeding ground for all sorts of viruses.

"More than a million of our people reside in 34 refugee camps ... four to five stay in a single makeshift room made of tarpaulin sheets and bamboo sticks," he said. "Most of us sleep on plastic paper spreading on the muddy floor in the tents. We have fewer options to think about our hygiene or take measures necessary to fight the coronavirus."