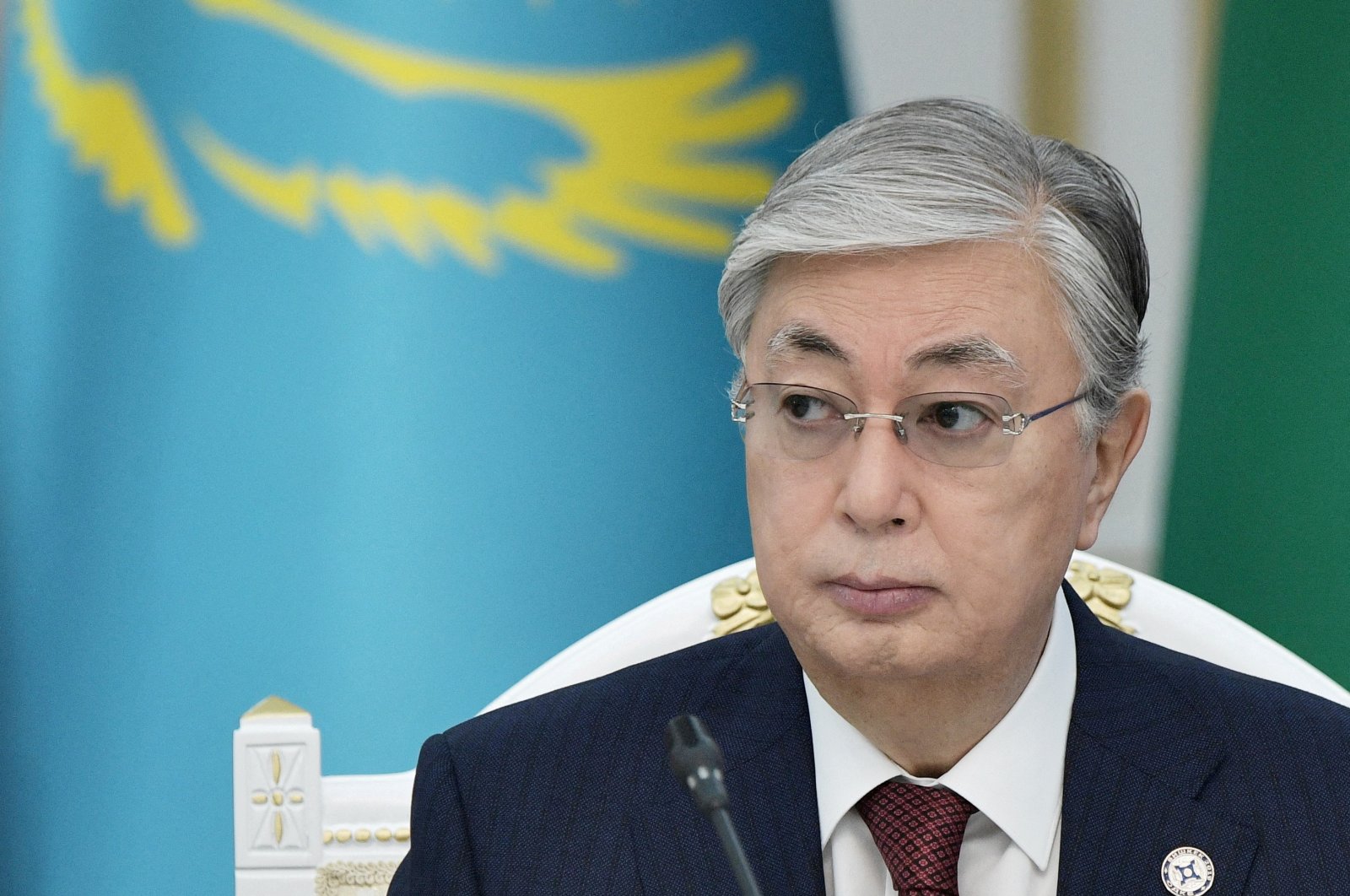 Kazakh President Kassym-Jomart Tokayev attends a session of the Council of the Collective Security Treaty Organization (CSTO) in Bishkek, Kyrgyzstan, Nov. 28, 2019. (Reuters Photo)
by DAILY SABAH WITH AGENCIES Jan 07, 2022 9:10 am

The leader of Kazakhstan, Kassym-Jomart Tokayev, declared that constitutional order was 'mainly restored' as Russia sends in paratroopers to quell nationwide demonstrations

Security forces appeared to be in control of the streets of Kazakhstan's main city Almaty on Friday morning and the president said constitutional order had mostly been restored, a day after Russia sent troops to put down a countrywide uprising.

However, fresh gunshots could be heard in the morning near the city's central square, where troops and protesters had battled through much of the previous day.

Dozens of people have been killed in clashes on the streets and protesters have torched and ransacked public buildings in several cities in the worst violence in the Central Asian state's 30 years of independence.

Demonstrations that began as a response to a fuel price hike have swelled into a broad movement against the government and former President Nursultan Nazarbayev, 81, the longest-serving ruler of any former Soviet state. He stepped down as president three years ago but his family is widely believed to have retained power.

Nazarbayev's successor, President Kassym-Jomart Tokayev, called in Russian paratroopers on Thursday as part of a force from former Soviet states to help end the unrest, which he has described as a "revolt" by foreign-trained militants.

"An anti-terrorist operation has been launched. The forces of law and order are working hard. Constitutional order has largely been restored in all regions of the country," Tokayev said in a statement. "Local authorities are in control of the situation. But terrorists are still using weapons and damaging the property of citizens. Therefore, counterterrorist actions should be continued until the militants are completely eliminated," it said.

In a separate address to the nation, Tokayev said Friday he had ordered the military to open fire without warning in event of further disturbances. According to the head of state, demonstrators continued to damage the property of the republic and use weapons against citizens. Tokayev asserted that there will be no negotiations with protestors and those, who don't give themselves up will be destroyed. The Kazakh leader said the main city was attacked by some 20,000 that he labeled as "bandits."

The country's Interior Ministry reported Friday that 26 "armed criminals" had been "liquidated, " using a term commonly used to describe the killing of people the government labels as terrorists, and more than 3,000 detained, while 18 police and national guard service members had been killed since the start of the protests.

On Friday morning, Reuters correspondents saw armored personal carriers and troops in the main square of Almaty. A few hundred meters away, a dead body lay in a heavily damaged civilian car. In another part of the city, an ammunition shop had been ransacked. Military vehicles and about 100 people in military uniforms had also taken positions at another square in Almaty.

In the capital, Nur-Sultan, access to the internet has been partially restored, and train traffic has been resumed across Kazakhstan. Almaty International Airport will remain shut until Friday evening, local TV station Khabar-24 reported, citing the airport's spokespeople.

The Russian-led Collective Security Treaty Organization (CSTO) said its peacekeeping force from former Soviet states would number about 2,500 and would stay in Kazakhstan for a few days or weeks. Moscow was "standing up for Kazakhstan and doing as allies should," said Deputy Foreign Minister Alexander Grushko.

Tokayev's administration said the force was still arriving and had not been engaged in combat or the "elimination of militants."

Russian military units are being flown into Kazakhstan "round the clock" and control the airport of the biggest city Almaty together with Kazakh law enforcement, Interfax news agency quoted the Russian Defense Ministry as saying on Friday.

According to RIA Novosti, paratroopers have been sent from Russia to the republic by more than 70 IL-76 and An-124 aircraft. As noted earlier, they will guard government buildings and help the local military maintain law and order. The operations of the CSTO peacekeeping forces are going to be led by the commander of the Russian Airborne Forces, Col. Gen. Andrei Serdyukov.

The airport had been taken over by a group of protesters on Wednesday, but a Reuters reporter who went there on Thursday said Kazakh security personnel had removed them.

CSTO's Secretary-General Stanislav Zas rejected claims spread on social networks that the organization will occupy Kazakhstan using the unstable situation across the country. Zas said that allegations of Russia's intentions for "some kind of invasion or occupation" are complete "stupidity."

"To provide assistance and support to Kazakhstan in this difficult period is the main motive for the decision of CSTO," he told RIA. "As soon as the situation stabilizes, another decision will be taken and the peacekeeping operation will be completed," he added.

Zas asserted that it is very unpleasant to listen and read about the Kremlin "taking advantage of the situation" and called the claims nonsense.

During his speech on Friday, Tokayev said peacekeeping forces sent from Russia and neighboring states had arrived at Kazakhstan's request and were in the country on a temporary basis to ensure security. He also thanked President Vladimir Putin as well as the leaders of China, Uzbekistan and Turkey for their assistance in ending the unrest.

Kazakhstan is experiencing the worst street protests since the country gained independence three decades ago. The demonstrations began over a near-doubling of prices for a type of vehicle fuel and have turned extremely violent, with government buildings set ablaze.

In a concession, the government on Thursday announced a 180-day price cap on vehicle fuel and a moratorium on utility rate increases. Tokayev has vacillated between trying to mollify the protesters, including accepting the resignation of his government, and promising harsh measures to end the violence, which he blamed on "terrorist bands."

The violence has been unprecedented in a country ruled firmly for decades by Nazarbayev, who was the last Soviet-era Communist Party boss still in power in an ex-Soviet state when he passed the presidency on to Tokayev in 2019.

Kazakhstan is a major oil producer and the world's top producer of uranium. Oil output at its top field, Tengiz, was reduced Thursday, the field's operator Chevron said, as some contractors disrupted train lines in support of the protests. Global oil prices have risen and the price of uranium has jumped sharply since the clashes began.

The country also accounts for close to a fifth of global bitcoin "mining," the electricity-intensive process of recording cryptocurrency transactions, and since the internet was shut down, the computing power of bitcoin's global network has fallen.