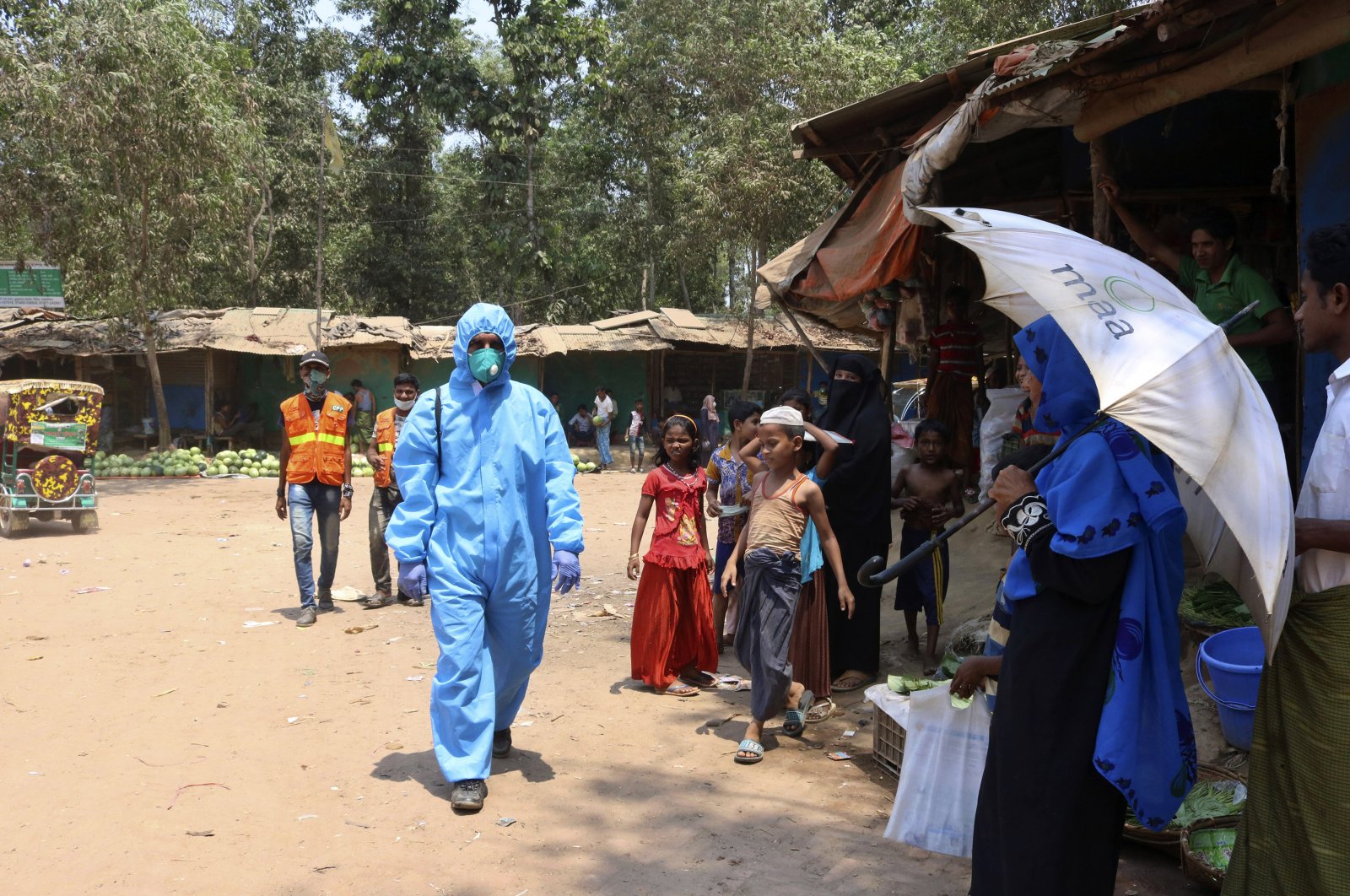 A health worker from an aid organization walks wearing a hazmat suit at the Kutupalong Rohingya refugee camp, Cox's Bazar, April 15, 2020. (AP Photo)
by DAILY SABAH WITH AGENCIES May 15, 2020 2:42 pm

After weeks of warnings over the potential for a serious COVID-19 outbreak if the virus spread into the densely populated Rohingya refugee camps in Bangladesh, the first coronavirus case was confirmed on Thursday, raising fears over the already dire humanitarian crisis.

The infected Rohingya and a local Bangladeshi who lives in the Cox's Bazar district who also tested positive, have been isolated, Mahbub Alam Talukder, the country’s refugee commissioner, said Thursday.

There have been warnings that the virus could race like wildfire through the cramped, sometimes sewage-soaked alleys of the network of 34 camps in southeast Bangladesh. More than a million live in squalid conditions in sprawling camps in the south of Bangladesh, with as many as a dozen people sharing one shelter and scarce access to soap and water in some areas. With about 40,000 people per square kilometer (103,600 per square mile) living in plastic shacks side by side, the 34 camps have more than 40 times Bangladesh's average population density. Each shack is barely 10 square meters (107 square feet) and many are packed with up to 12 residents.

Most of the refugees have been there since around 750,000 of the Muslim minority fled a 2017 military offensive in neighboring Myanmar for which its government faces genocide charges for at the United Nation's top court. The persecution of Rohingya Muslims in Myanmar is one of the worst humanitarian tragedies of our time, but it is also the most overlooked. Rohingya, described by the U.N. as one of the most persecuted communities in the world, has been facing systematic state persecution in the northern Rakhine state of Myanmar since the early 1970s.

In early April authorities had locked down Cox's Bazar, home to 3.4 million people including the refugees after a number of COVID-19 cases reached the country. Bangladesh restricted traffic in and out of the camps and forced aid organizations to slash manpower by 80%. The country of 168 million people is under lockdown and had seen a rapid rise in coronavirus cases in recent days, with almost 19,000 cases and 300 deaths as of Thursday.

Senior U.S. official Sam Brownback, who has visited the refugees, said it was inevitable the virus would reach the "incredibly crowded" camps and spread "very rapidly." Daniel Sullivan from Refugees International called it the "realization of a nightmare scenario."

Shamim Jahan at Save the Children said there was the "very real prospect that thousands of people may die" with "no intensive care beds" in the camps.

World Health Organization spokesman Catalin Bercaru said that since February, the entire health sector had been "working round the clock" to increase capacity for testing, isolation and treatment, as well as to train health workers and talk to communities. The U.N. refugee agency said that 12 severe respiratory infection treatment centers were being established locally and that up to 1,900 intensive care beds, five quarantine centers and 20 isolation facilities were planned.

Humanitarian groups would also help with visits by health workers to people inside the camps plus home deliveries of food and fuel. "We call on additional international solidarity and support to ensure an adequate response for this particularly vulnerable population," a UNHCR statement said.

Aid agencies and rights groups have been demanding Bangladesh's government withdraw restrictions on using mobile phones and internet in the camps. Authorities had suspended internet use for security reasons, and recent reports said armed groups among the refugees were allegedly involved in kidnappings and smuggling of drugs.