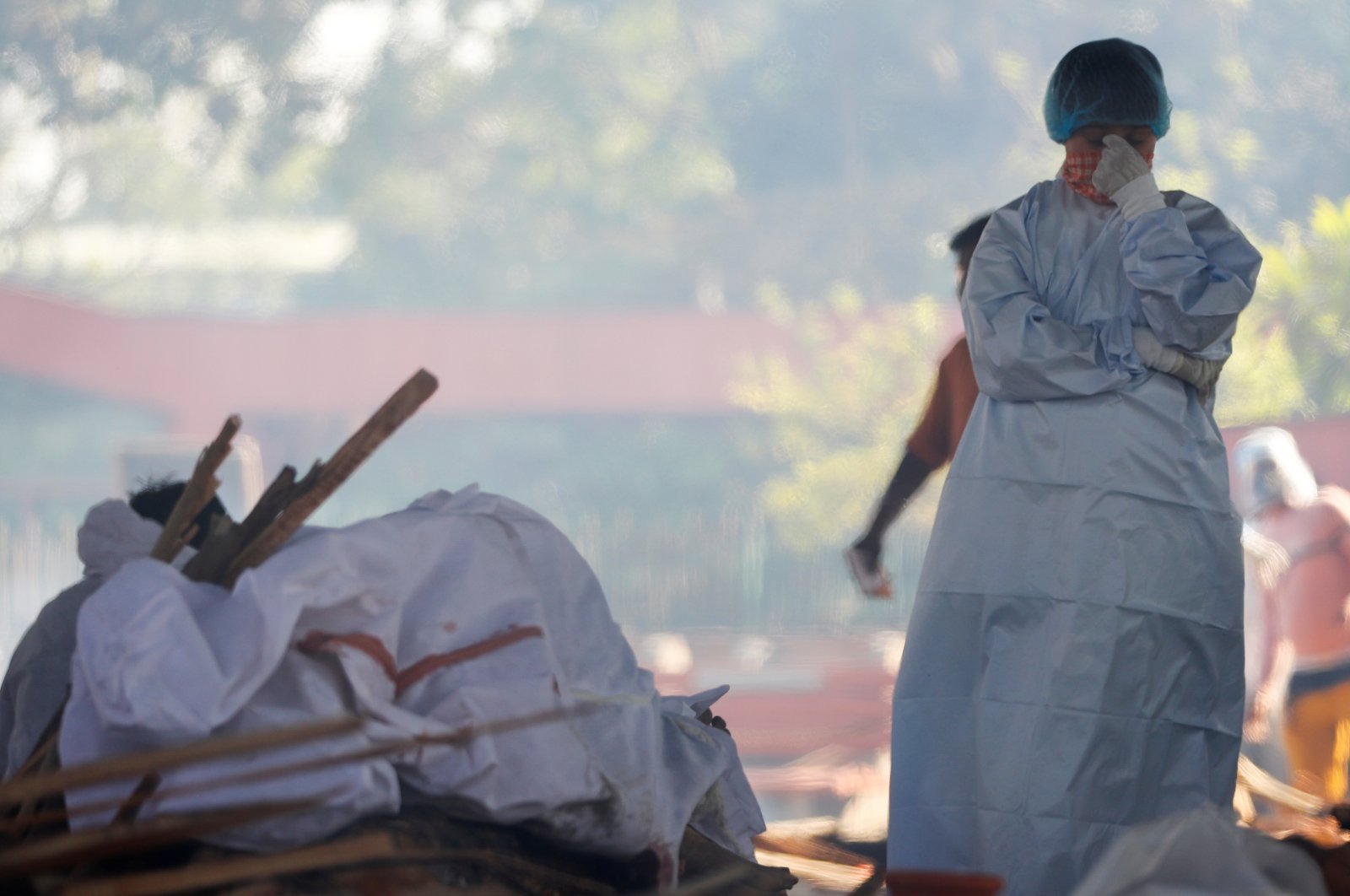 The worst national outbreak since the beginning of the COVID-19 pandemic continued to wreak havoc in India, where 346,786 people tested positive Saturday amid collapsing health system and a severe shortage of oxygen.

The infection tally in India set a global daily record for the third day in a row, pushing the total cases worldwide to 893,000, according to the count published by the Agence France-Presse (AFP). The previous daily high was some 819,000 cases on Jan. 8.

Over the course of a week, more than 5.5 million cases were recorded worldwide, including almost 2 million in India. India has also recorded a record 2,624 deaths over the previous 24 hours. The pandemic has killed nearly 190,000 people in total in the country. Other countries trailing India with the most new infections are the United States (490,000 cases in one week), Brazil (459,000) and Turkey (404,000).

The threshold of 150 million cases worldwide is expected to be reached next week. According to an AFP count from official figures on Saturday at 10 a.m. GMT, 145 million cases have been recorded worldwide since the start of the pandemic in December 2019 in China.

Hospitals in New Delhi and some of the worst-hit states have reported critical shortages of beds and oxygen supplies on Saturday. Families are waiting for days to cremate their loved ones at overburdened crematoriums, with many turning to makeshift facilities for last rites.

Health experts and critics say a downward trend in infections late last year lulled authorities into complacency, and they failed to plug the holes in the ailing health care system that had become evident during the first wave. They also blame politicians and government authorities for allowing super-spreader events, including religious festivals and election rallies, to take place as recently as this month.

"It’s not the virus variants and mutations which are a key cause of the current rise in infections,” Dr. Anant Bhan, a bioethics and global health expert, tweeted this week. "It’s the variants of ineptitude and abdication of public health thinking by our decision makers.”

The government ramped up its efforts to get medical oxygen to hospitals using special Oxygen Express trains, air force planes and trucks to transport tankers, and took measures to exempt critical oxygen supplies from customs taxes. But the crisis in the country of nearly 1.4 billion people was only deepening as overburdened hospitals shut admissions and ran out of beds and oxygen supplies.

"Every hospital is running out (of oxygen). We are running out,” Dr. Sudhanshu Bankata, executive director of Batra Hospital, a leading hospital in the capital, told New Delhi Television channel.

In a sign of the desperation unfolding over the shortages, a high court in Delhi warned Saturday it would "hang” anyone who tries to obstruct the delivery of emergency oxygen supplies, amid evidence that some local authorities were diverting tanks to hospitals in their areas. The court, which was hearing submissions by a group of hospitals over the oxygen shortages, termed the devastating rise in infections a "tsunami."

"Our supply was delayed by seven-eight hours on Friday night and the stock we received last night is only 40% of the required supply,” the newspaper quoted the hospital’s medical superintendent, Dr. D.K. Baluja, as saying.

On Thursday, 25 COVID-19 patients died at the capital’s Sir Ganga Ram Hospital amid suggestions that low oxygen supplies were to blame.

India’s infection surge, blamed on a highly contagious variant first detected here, came after Prime Minister Narendra Modi declared victory over the coronavirus in January, telling the virtual gathering of the World Economic Forum that India’s success couldn’t be compared with anywhere else.

"In a country which is home to 18% of the world population, that country has saved humanity from a big disaster by containing corona effectively,” Modi said.

But health experts and critics say a downward trend in infections late last year lulled authorities into complacency, as they failed to plug the holes in the ailing health care system that had become evident during the first wave. They also blame politicians and government authorities for allowing super-spreader events, including religious festivals and election rallies, to take place as recently as this month.

Dr. Vineeta Bal, who studies immune systems at the Indian Institute of Science Education and Research in Pune city, said that at the heart of India’s "paralyzing” oxygen shortage was the sense of complacency that took hold as cases declined.

When the virus first erupted in India last year, Modi imposed a harsh, nationwide lockdown for months to keep hospitals from being overwhelmed. But the government relaxed restrictions in the face of widespread financial hardship and Modi has refrained from ordering a new lockdown.

But a pandemic doesn’t just end, Bal noted. Summing up the authorities' response, she said: "Failure of governance, failure of anticipation, failure of planning, compounded by this sense that we’ve conquered (the virus).”

Modi, Home Minister Amit Shah as well as opposition politicians this month took part in mass election rallies in five populous states with tens of thousands of supporters who were not wearing masks or social distancing.

In addition, religious leaders and hundreds of thousands of devout Hindus descended on the banks of the Ganges River in the northern Indian city of Haridwar last month for a major Kumbh festival. Experts have described these as super-spreader events.

"Political and religious leaders have been exemplary on television for not following the restriction that they’re saying ordinary people should follow,” Bal said.

Last week, the Supreme Court told Modi’s government to produce a national plan for the supply of oxygen and essential drugs for the treatment of coronavirus patients.

The government said Saturday it would exempt vaccines, oxygen and other oxygen-related equipment from customs duty for three months, in a bid to boost availability.

In addition, Modi’s emergency assistance fund, dubbed PM CARES, in January allocated some $27 million for setting up 162 oxygen generation plants inside public health facilities in the country. Three months on, only 33 have been created, according to the federal Health Ministry.

But the Defense Ministry is set to fly 23 mobile oxygen generating plants within a week from Germany to be deployed at army-run hospitals catering to COVID patients. Each plant will be able to produce 2,400 liters of oxygen per hour, a government statement said Friday.

That’s coming too late for hospitals in the capital and hard-hit states such as Maharashtra, which have turned to social media to plead with authorities to replenish their oxygen supplies. Early Saturday, Bankata’s Batra hospital reported severe shortage of oxygen for its 190 admitted patients.

When the news anchor asked Bankata what happens when a hospital issues an SOS call as his had done, Bankata replied: "Nothing. It’s over. It’s over.”

Fortis Healthcare, a chain of hospitals across India, said Saturday that one of its hospitals in New Delhi "is running out of oxygen” and was suspending admissions. In a tweet, it said it had been waiting for fresh supplies since the morning.

As the oxygen scarcity deepened, local officials in several states disrupted movement of tankers and diverted supplies to their areas.

On Friday, the Press Trust of India news agency reported that a tanker-truck carrying oxygen supplies in Delhi’s neighboring state of Haryana went missing. Days before, the news agency reported, a minister in Haryana blamed Delhi authorities for looting an oxygen tanker when it was crossing their territory.

"Unfortunately, many such incidents have occurred and have dire effect on hospitals in need of oxygen supplies,” said Saket Tiku, president of the All India Industrial Gases Manufacturers Association.

India is a major vaccine producer, but even after halting large exports of vaccines in March to divert them to domestic use, there are still questions of whether manufactures can produce them fast enough to bring down infections in time in the world's second most populous country.

India said this week it would soon expand its vaccination program from people aged 45 to include all adults, some 900 million people – well more than the entire population of the entire European Union and United States combined.

Pakistan on Saturday reported its highest COVID-19 death toll in a single day. Authorities reported 157 deaths, bringing the overall fatalities to 16,999. A total of 5,908 additional cases pushed the toll to 790,016, as authorities complain of routine violations of social distancing and mask-wearing rules.

Information Minister Fawad Chaudhry said in a talk show Saturday that despite the increasing cases and deaths, Pakistan’s situation was better than in neighboring India. He said a planeload of 500,000 doses of China’s Sinovac vaccines arrived on Friday.

Pakistani politician also expressed their sympathy for their archrival. "I want to express our solidarity with the people of India as they battle a dangerous wave of COVID-19,” Khan said on Twitter.

"Our prayers for a speedy recovery go to all those suffering from the pandemic in our neighborhood and the world. We must fight this global challenge confronting humanity together.”

"We express our support to the people of India in the wake of the current wave of COVID-19 infections, that has hit our region hard. On behalf of the people of Pakistan, I extend our heartfelt sympathies to the affected families in India,” he said.

The pandemic, he added, is "yet another reminder that humanitarian issues require responses beyond political consideration.”

He said Pakistan continues to work with member states of the South Asian Association of Regional Cooperation – a regional intergovernmental organization – to foster cooperation to tackle the pandemic.

Faisal Edhi, the head of Edhi Foundation, made the offer in a letter to Modi, seeking permission to travel to India with volunteers and 50 ambulances to assist Indian health workers. Edhi says he’ll lead his medical team, which will pay for the accommodation and food for his volunteers during the stay in India.

India’s response to the offer was not yet known. Edhi Foundation is known for humanitarian relief work in Pakistan, where it also runs the country’s largest ambulance service.

Pakistan and India have a history of bitter relations. They’ve fought two of the three wars on the disputed Himalayan region of Kashmir since gaining independence from Britain in 1947.

Iran’s state-run IRNA news agency has reported that the country’s civil aviation agency has banned all flights to and from India and Pakistan because of the dramatic surge in coronavirus cases in the two nations.

IRNA says the decision was made by Iran’s Health Ministry and it takes effect Saturday at midnight.

Mohammad Hassan Zibakhsh, spokesperson for Iran’s Civil Aviation Organization noted there are no routine flights between Iran and India and "flights are operated occasionally.”

Several other countries in the region, including the sheikhdoms of the United Arab Emirates (UAE), Oman and Kuwait, also have banned flights to and from India over the rise in coronavirus cases there.

Zibakhsh said flights to and from 41 countries already were prohibited in Iran, while those who want to fly to other countries listed as high risk are required to have a coronavirus test in Iran. Travelers over 8 years old need to submit a negative PCR test within 96 hours of departure and do another test on arrival.

The classification means that starting Monday, only German citizens will be allowed to fly from India to Germany. Passengers will need to be tested before departure and immediately go into quarantine for 14 days after landing.