Dam collapse in China could point to "black swan" disaster 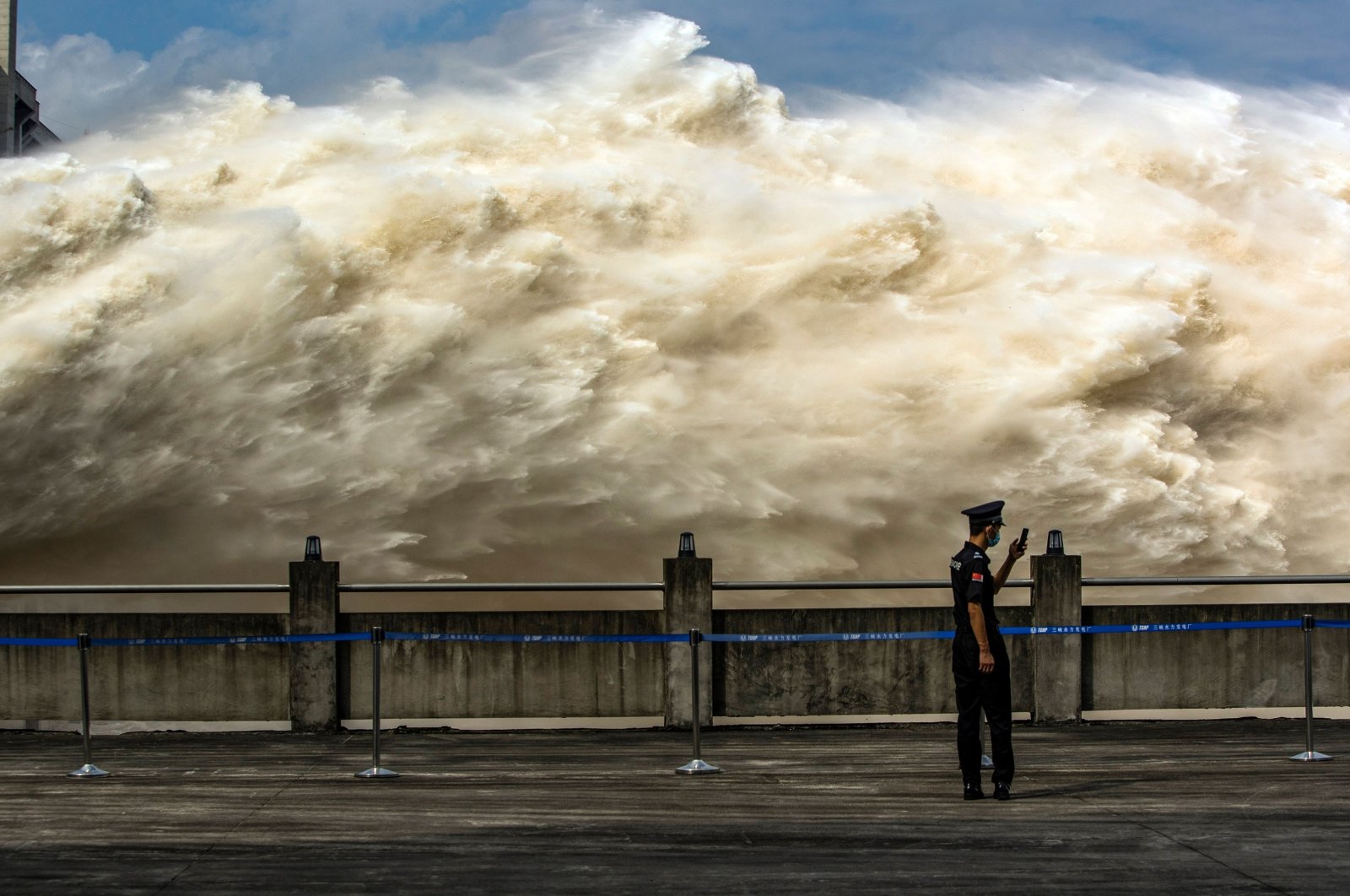 A security guard looking at his smartphone while water is released from the Three Gorges Dam, a gigantic hydropower project on the Yangtze river, to relieve flood pressure in Yichang, central China's Hubei province, July 19, 2020. (AFP Photo)
by REUTERS Jul 22, 2020 1:52 pm
RECOMMENDED

The dam at a small reservoir in China's Guangxi region gave way last month after days of heavy rain in a collapse that could be a harbinger of sterner tests for many of the country's 94,000 aging dams as the weather gets more extreme.

Located in Yangshuo county, famed for its otherworldly karst landscape, the dam collapsed at around midday on June 7, inundating roads, orchards and fields in Shazixi village, residents told Reuters.

"The water levels were never so high in previous years, and the dam had never collapsed."

Completed in 1965, the dam, made of compacted earth, was designed to hold 195,000 cubic meters of water, enough to fill 78 Olympic-size swimming pools and meet the irrigation needs of Shazixi's farmers.

On a visit to the reservoir in mid-July, Reuters found the length of the dam, of about 100 meters (328 meters), had largely vanished. It was reinforced 25 years ago.

The water went over the dam, which then collapsed, said a member of a survey crew at the reservoir, declining to be identified as he was not authorized to speak to media.

Shazixi residents said there were no deaths.

But the collapse, which was not reported by domestic media, suggests big storms might be enough to overwhelm reservoirs, especially if the design is inferior and maintenance has been patchy.

That raises the prospect of disaster in river valleys and flood plains that are much more densely populated than they were when the dams were built.

Thousands of dams were built in the 1950s and 1960s in a rush led by Mao Zedong to fend off drought in a largely agrarian China.

In 2006, the Ministry of Water Resources said, between 1954 and 2005, dikes had collapsed at 3,486 reservoirs due to sub-standard quality and poor management.

It was unclear if record-breaking rains were to blame for the Shazixi collapse or if the dam’s emergency spillway had been blocked by silt or if it was a design problem.

The water resources department in the area declined to comment. The county government did not respond to a request for comment.

In Guangxi, in southwestern China, rainfall and temperatures were on average significantly higher in 1990-2018 compared with the previous 29 years, official data shows.

It’s the extreme events that put dams at risk, said David Shankman, a geographer at the University of Alabama who studies Chinese floods.

"But a dam should be able to withstand extreme events even if they become regular, and when the flood is over, it should be exactly of the same quality as before the event, if the dam was properly designed and built," Shankman said.

According to a notice at the Shazixi reservoir’s monitoring station, the 151.2 meter-tall dam was built with a once-every-two-century worst-case scenario in mind in which water was expected to reach 149.48 meters. Last month, it overflowed.

In the county seat of Yangshuo in June, more rain fell in three hours than usually falls in two months.

The Ministry of Water Resources did not respond to a request for comment.

In what could be another sign of trouble to come, water behind a dam on a tributary of the Yangtze river rose so sharply that authorities on Sunday were forced to blow up part of the dam to lower the level.

Ye Jianchun, deputy minister of the Ministry of Water Resources, told a recent news conference he was confident flood-control projects on major rivers were capable of handling the largest floods seen since the founding of the People’s Republic of China.

But Ye was not so categorical about dams on other rivers, saying excessive floods may exceed the defense capability of the engineering to result in a "black swan" event.

Aware of the risks, authorities have been reinforcing and raising old dams and stepping up inspections. New dams are planned to increase storage capacity.

North of Yangshuo at Qingshitan is the biggest dam in the area. The banks of the river into which it empties have been shored up since last month, said a workman dumping rocks and soil with a wheel loader.

But climate change is bringing a new normal of extremes and flood-risk policies decided a decade or two ago are no longer sufficient, said Benjamin Horton, director at the Earth Observatory of Singapore.

"What really needs to happen is to work with the ecosystems, not against them by building dams, by extending flood wetlands and flood plains and allowing the water to naturally mix with the environment," he said.