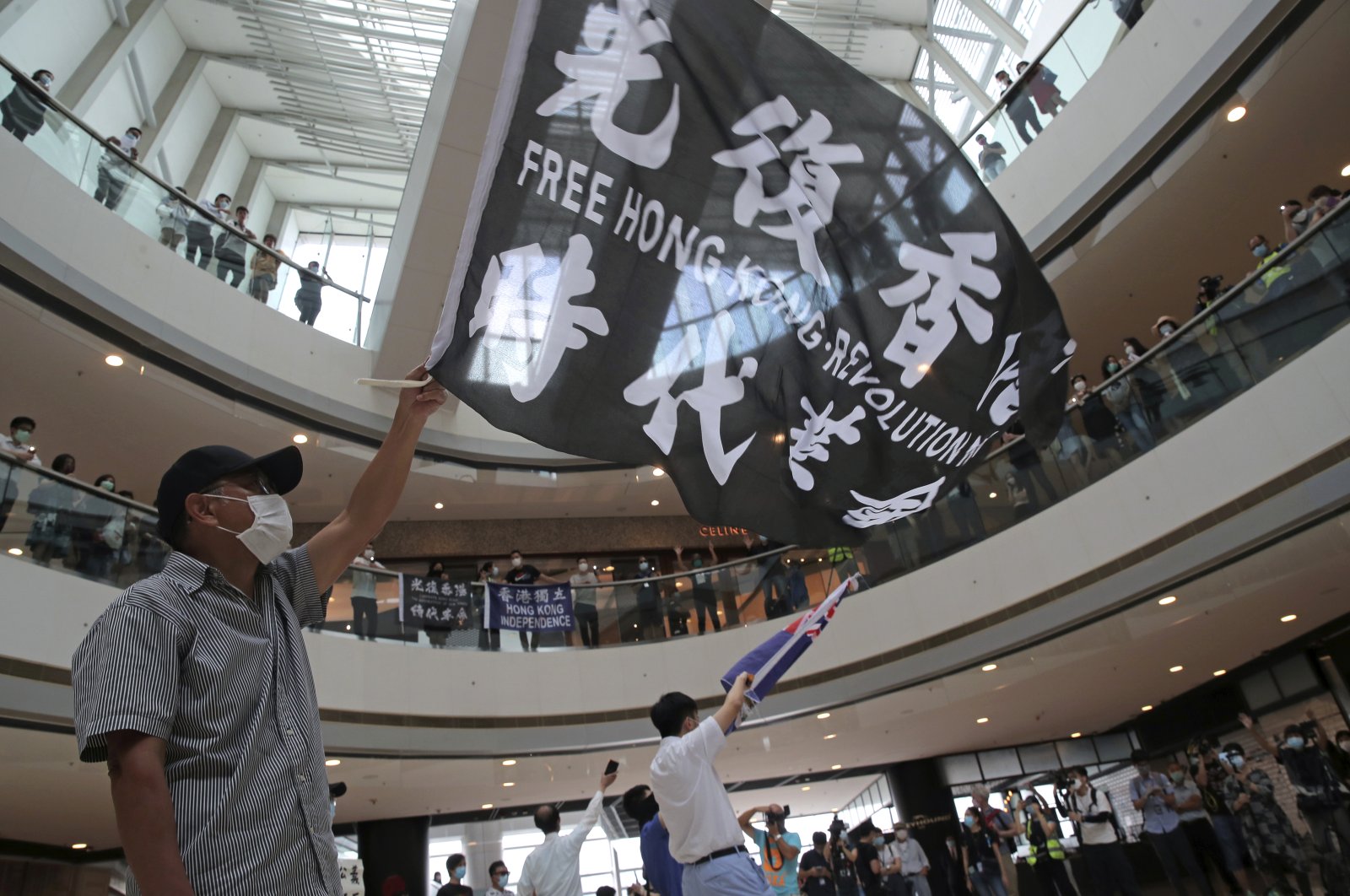 Protesters wave flags in a shopping mall during a protest against China's national security legislation for the city, in Hong Kong, Friday, May 29, 2020. (AP Photo)
by ASSOCIATED PRESS
May 29, 2020 12:46 pm

Dozens of people joined a protest in a mall in Hong Kong on Friday following a vote by China’s ceremonial parliament to approve legislation that could severely restrict opposition political activity and civic activity in the Asian financial center.

The protesters chanted slogans in the main atrium of the mall in the high-end Central district, some draping banners over the balconies with slogans such as "Independence for Hong Kong.”

Police waited in vans parked prominently outside the mall but did not attempt to break up the gathering. Hundreds of people have been arrested during recent demonstrations that seek to revive the momentum of protests that shut down large parts of the city during the second half of last year.

China's National People’s Congress on Thursday voted to approve the bill that will now be sent to its standing committee for final approval. Details of the final version of the law aren’t known, but China says it will prohibit separatist activities and actions that might threaten the Communist Party’s monopoly on political power in mainland China.

Beijing and its supporters in Hong Kong are defending the legislative move against criticism from foreign countries, including the U.S., which has threatened to revoke special trade privileges granted to the former British colony when it was handed over to China in 1997 under a "one country, two systems” framework in which it was guaranteed its own political, legal, social and legal institutions for 50 years.

In Beijing, foreign ministry spokesperson Zhao Lijian said China would not tolerate any interference in what it considers a strictly internal matter.

"We advise the U.S. side to have a correct understanding of the situation and stop interfering in Hong Kong affairs and China’s internal affairs. If the U.S. insists on jeopardizing China’s interests, China will definitely take all necessary measures to fight back.”

Tensions between the administration of President Donald Trump and China are already high over trade, human rights, China's threats against Taiwan and the coronavirus pandemic.

Trump says he intends to make an announcement about China on Friday and officials say he is considering a proposal to revoke the visas of Chinese students affiliated with educational institutions in China that are linked to the People’s Liberation Army or Chinese intelligence.

Taiwanese President Tsai Ing-wen on Friday visited a Hong Kong bookstore that re-opened in Taipei after its part-owner was abducted to the Chinese mainland, in a show of support for Hong Kong's pro-democracy movement and opposition to the national security law.

Tsai told the bookstore owner, Lam Wing-kee, that her administration will "provide whatever help it could to our Hong Kong friends." Taiwan this week said it will extend residency rights for Hong Kong residents who have moved to the self-governing island democracy in increasing numbers over the past year.

Taiwanese Premier Su Tseng-chang said the national security legislation is a clear sign that China is not sincere in carrying out the "one country, two systems" policy it promised to Hong Kong and which it has proposed as a framework for unification with Taiwan.

"They are entirely not making good on their promise. China's commitment to ‘one country, two systems' is nothing but empty talk," Su said.

China claims Taiwan as its own territory to be brought under its control by force if necessary. The two sides separated during a civil war in 1949.