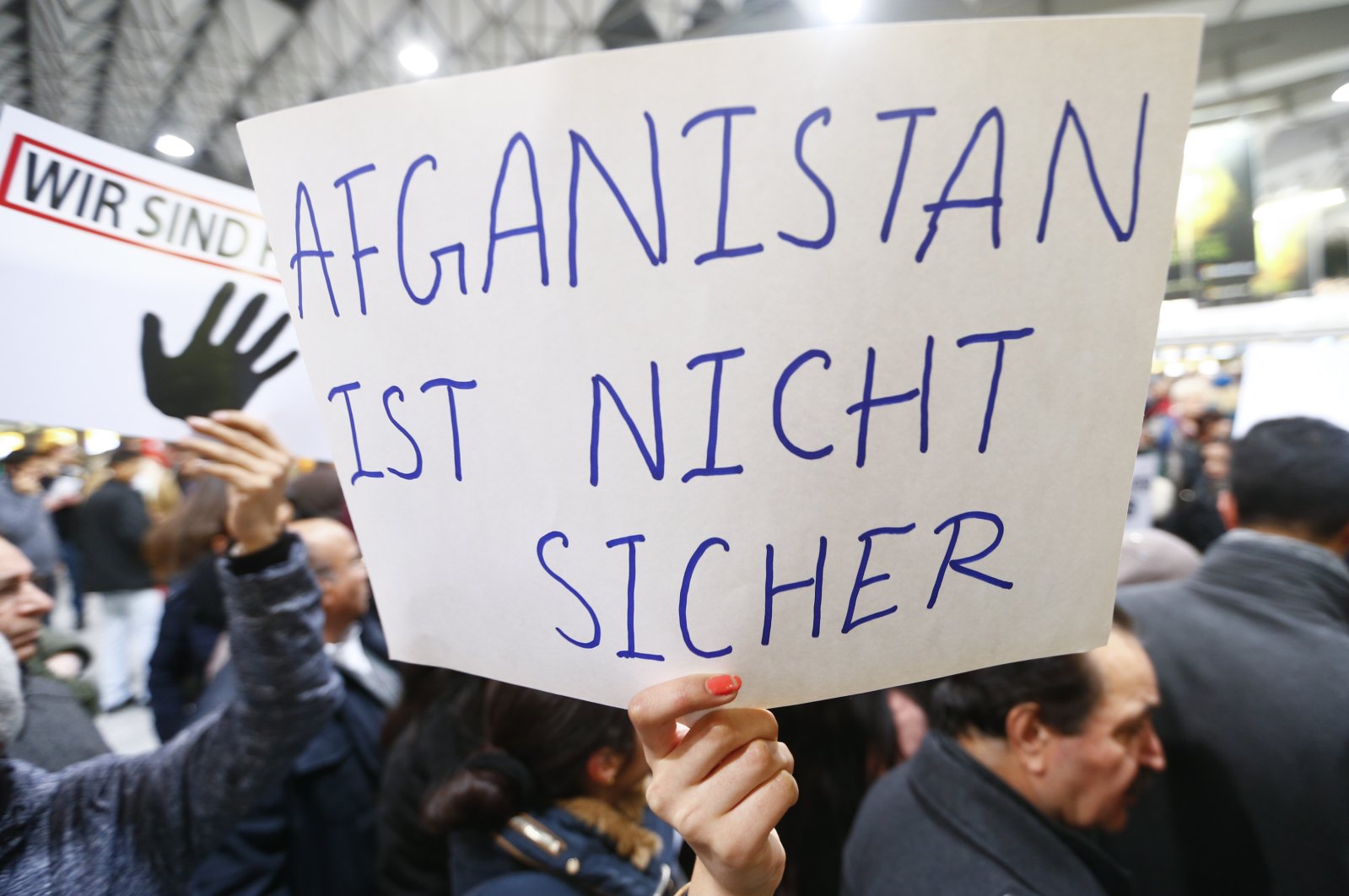 Protesters hold a placard reading "Afghanistan is not secure" during a demonstration against the deportation of Afghan asylum seekers from Germany back to Afghanistan, at Frankfurt Airport, Germany, Dec. 14, 2016. (Reuters Photo)
by French Press Agency - AFP Aug 10, 2021 4:59 pm
RECOMMENDED

Several EU countries urged the Europan Commission to continue the deportation of Afghans migrants despite the worsening situation due to the Taliban's advances, officials said on Tuesday.

The governments of Austria, Belgium, Denmark, Germany, Greece and the Netherlands wrote to the EU's executive arm saying they should be allowed to send Afghan migrants back if their asylum bids fail.

Afghanistan urged the EU in July to cease forced deportations of Afghan migrants for three months as security forces battle the Taliban offensive ahead of the full U.S. military pullout from Afghanistan on August 31.

"In a letter I have asked the Commission, together with Germany, Austria, the Netherlands, Denmark and Greece, to continue to guarantee the forced return of certain Afghans," Belgian asylum and migration minister Sammy Mahdi said.

"Just because regions of a country are dangerous doesn't mean that every person from that country has the right to protection," he said on Twitter.

The Dutch justice ministry also confirmed that it had asked Brussels not to suspend forced deportations while adding that "developments in Afghanistan were being followed closely."

Danish Immigration Minister Mattias Tesfaye said he was "happy" that the six countries were of the same mind on the issue.

"It's important for the government that failed asylum seekers should be sent to their own country," he said in a statement issued after the letter was originally sent late last week.

But a senior EU official said that because the Afghan authorities had notified Brussels that Kabul was suspending its forced return operations for three months, there was little chance any would go ahead.

"And clearly given the current situation I do not expect forced return operations to actually take place," the official said.

The official said that so far this year 1,200 people had been returned to Afghanistan from the EU – with 1,000 of those being "voluntary" and 200 "forced."

The Taliban are in control of seven Afghan provincial capitals after a blitz across the north of the country forced tens of thousands of people to flee their homes.

The United States has all but left the battlefield ahead of the completion at the end of the month of its longest war, following the 2001 invasion to topple the Taliban after the September 11 attacks.

After Kabul's appeal to EU countries on July 11, Sweden and Finland halted forced deportations to Afghanistan.