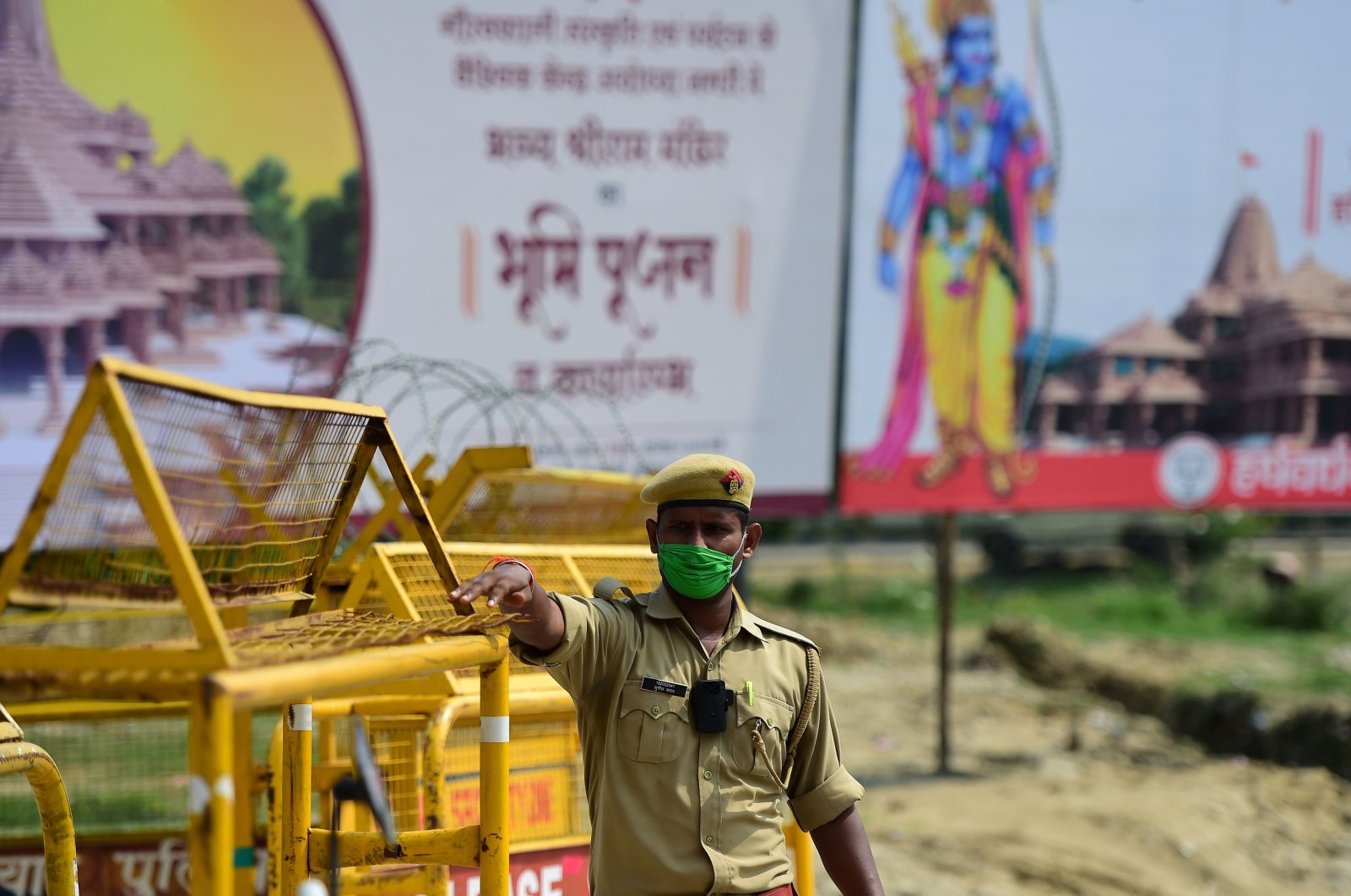 A policeman gestures as he stands at a checkpoint ahead of the ground-breaking ceremony of the proposed Ram Temple in Ayodhya, India, Aug. 4, 2020. (AFP Photo)
by ASSOCIATED PRESS Aug 04, 2020 10:19 am
RECOMMENDED

As Hindus prepare to celebrate the groundbreaking of a long-awaited temple at a disputed ground in northern India, Muslims say they have no firm plans yet to build a new mosque at an alternative site they were granted to replace the one torn down by Hindu hardliners decades ago.

Wednesday’s groundbreaking ceremony follows a ruling by India’s Supreme Court last November favoring the building of a Hindu temple on the disputed site in Uttar Pradesh state. Hindus believe their god Ram was born at the site and claim that the Muslim Emperor Babur built a mosque on top of a temple there.

The 16th-century Babri Masjid mosque was destroyed by Hindu hardliners in December 1992, sparking massive Hindu-Muslim violence that left some 2,000 people dead. The Supreme Court’s verdict paved the way for the building of a temple in place of the demolished mosque.

The court also ordered that Muslims be given 5 acres (2 hectares) of land to build a new mosque at a nearby site. But the ruling disappointed Muslims, who comprise around 14% of Hindu-majority India’s 1.3 billion people.

On Wednesday, Prime Minister Narendra Modi will lay five silver bricks as the temple foundation amid the chanting of Hindu religious hymns. Houses and other buildings close to the temple site in the city of Ayodhya are being painted yellow to recreate the look when the Hindu god Ram ruled there for thousands of years, according to the Hindu epic Ramayana.

More than 100,000 oil lamps will light up the city in celebration, said chief priest Satyendra Das.

A security clampdown, however, will allow only limited entry to Hindu devotees into the city because of the coronavirus pandemic. Last week, a priest and 15 police officers in the area tested positive for the virus.

As ordered by the Supreme Court, the Uttar Pradesh state government set up a trust last week for the building of a new mosque at a nearby site, in a village 25 kilometers (15 miles) from the spot where the Babri mosque was demolished by Hindu radicals.

But there is no allocation of funds yet for the project. The government-run Sunni Central Waqf (Endowment) Board’s chairman, Zafur Ahmed Faruqi, said mosques are always built with public support. “Money is bound to pour in,” he said. “We will open a bank account and ask people to donate for the construction of the mosque.”

Faruqi did not give a time frame for building the new mosque. Muslim community groups have not yet come forward in support of the project.

Hindu hardliners began preparing for the new temple in the 1990s, and prefabricated blocks of huge, ornately carved stones displaying Hindu mythology are ready for once the construction work starts. The construction is expected to take 3 1/2 years.

Zafaryab Jilani, who represents the All India Muslim Personal Law Board, said that while the Muslim community is not satisfied with the Supreme Court’s ruling, it will respect the decision and not protest the building of the temple.

Saeed Naqvi, a political analyst, said he did not expect any trouble between Hindus and Muslims over the issue. “Muslims by themselves have learned the hard lesson that if they oppose this issue, it only helps Hindutva (Hindu ideology),” he said.

Several prominent Muslim writers, academics and activists, who did not want to be identified, refused to discuss the issue, suggesting that the community was resigned to the new reality.

But some expressed fear that the new temple could embolden Hindu nationalists to target two other mosques in Uttar Pradesh.

“The Modi government should assure Muslims that Hindu outfits will not ask for the construction of temples in Varanasi and Mathura after demolishing existing mosques there,” said Iqbal Ansari, the main litigant in the Supreme Court case.

The Gyanvapi mosque in the Uttar Pradesh city of Varanasi is in the complex of the Kashi Vishwanath temple dedicated to Lord Shiva. In Mathura, another city in the state, the Shahi Idgah mosque stands adjacent to the temple complex that marks the birthplace of the Hindu god Krishna. Hindu organizations say both structures were built by razing previously existing temples.