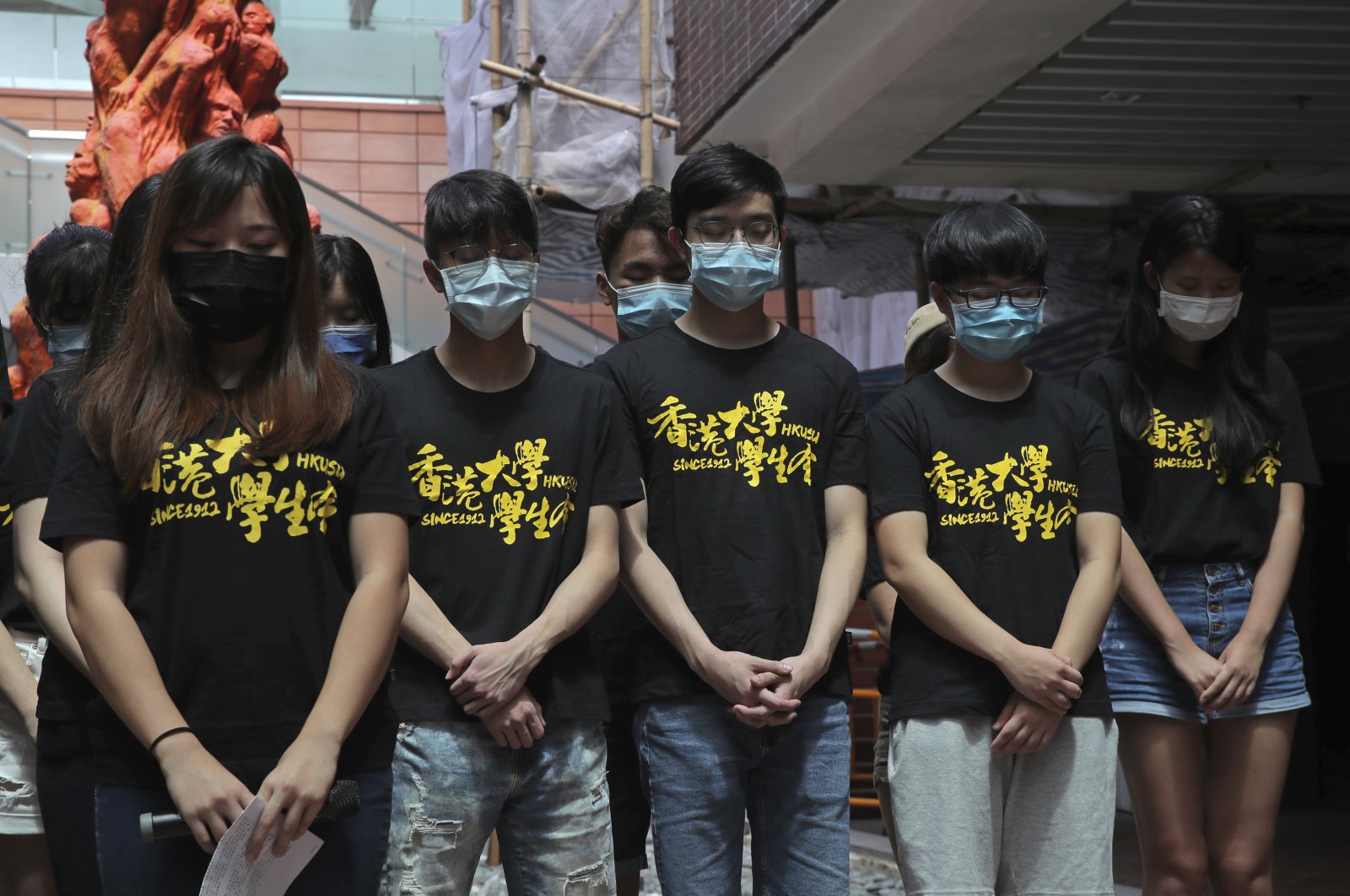 University students observe one minute of silence to mourn those killed in the 1989 Tiananmen crackdown, in front of the "Pillar of Shame" statue at the University of Hong Kong, Hong Kong, June 4, 2020. (AP Photo)
by ASSOCIATED PRESS Jun 04, 2020 11:25 am
RECOMMENDED

China has tightened controls over dissidents while pro-democracy activists in Hong Kong and elsewhere on Thursday sought ways to mark the 31st anniversary of the crushing of the pro-democracy movement centered on Beijing’s Tiananmen Square.

That came after authorities in Hong Kong took the extraordinary move of canceling an annual candlelight vigil in the semi-autonomous Chinese territory's Victoria Park for the first time in 30 years.

Authorities cited the need for social distancing amid the coronavirus outbreak, despite the recent reopening of schools, beaches, bars and beauty parlors. Hong Kong has had relatively few cases of the virus and life has largely returned to normal in the city of 7.4 million.

However, China has long detested the vigil, the only such activity allowed on Chinese territory to commemorate victims of the crackdown, which remains a taboo subject on the mainland. Hundreds, possibly thousands of people were killed when tanks and troops assaulted the center of Beijing on the night of June 3-4, 1989, to break up weeks of student-led protests seen as posing a threat to authoritarian Communist Party rule.

“We all know the Hong Kong government and the Chinese government really don’t want to see the candle lights in Victoria Park," said Wu'er Kaixi, a former student leader who was No. 2 on the government's most-wanted list following the crackdown.

Tiananmen Square, where thousands of students had gathered in 1989, was quiet and largely empty on Thursday. Police and armored vehicles stood sentry on the vast surface of the square. Few pedestrians lined up at security checkpoints where they must show ID to be allowed through as part of mass nationwide surveillance measures aimed at squelching any dissent.

The cancellation of the vigil also comes amid a tightening of Beijing’s grip over Hong Kong, with the National People’s Congress, China’s ceremonial parliament, moving to pass national security legislation that circumvents Hong Kong’s local legislature and could severely limit free speech and opposition political activity.

In Hong Kong, a law is being passed to make it a crime to disrespect China’s national anthem, and 15 well-known veteran activists were arrested and charged with organizing and taking part in illegal demonstrations. Those actions are seen as part of a steady erosion of civil rights Hong Kong was guaranteed when it was handed over from British to Chinese rule in 1997.

“The ban comes amid an alarming acceleration of attacks on the autonomy of Hong Kong and the undermining of the rights and freedoms of the Hong Kong people guaranteed under Hong Kong and international law,” Sharon Hom, executive director of Human Rights in China, said in a statement.

Despite the ban on the vigil, the Asian financial hub was bracing for “pop-up” protests of the type that raged around the city during months of anti-government protests last year that often led to violent confrontations between police and demonstrators.

Thousands have been arrested over the demonstrations, which were sparked by proposed legislation that could have seen suspects extradited to mainland China where they could face torture and unfair, politically biased trials.

The Hong Kong Alliance in Support of Patriotic and Democratic Movements of China that organizes the annual vigil has called on people around the city to light candles at 8 p.m. (1200 GMT) and plans to livestream the commemorations on its website www.64live.org.

Alliance Chairman Lee Cheuk-yan said protesters still planned to gather at the park to mourn victims of the massacre and show their support for the democratic cause in China. It wasn't clear what form the activity would take or how many would attend. The entrance to the park was blocked by police barriers on Thursday.

“Hong Kong government tried to please or show loyalty to Beijing and ban our gathering before even the national security comes in. But we are determined," Lee said at a kiosk set up by the group to distribute flyers in the busy Causeway Bay shopping district near the park.

Other vigils, virtual and otherwise, are planned elsewhere, including in Taiwan, the self-ruled island democracy whose government called again this year for Beijing to own up to the facts of the crackdown.

“As to the political disturbance that occurred in the late 1980s, the Chinese government has had a clear conclusion. The great achievements that we have achieved ... have fully demonstrated that the development path China has chosen is completely correct, which conforms to China’s national conditions and has won the sincere support of the Chinese people,” Zhao told reporters at a daily briefing.

U.S. Secretary of State Mike Pompeo marked the crackdown anniversary on Tuesday, a day after federal forces used tear gas to clear peaceful protesters from a park in front of the White House.

Pompeo tweeted criticism of China and Hong Kong for banning the vigil before meeting privately with a group of Tiananmen Square survivors at the State Department. That too drew criticism from China.

Alongside the exchanges of rhetoric, China's small, beleaguered dissident community has again come under greater scrutiny from the authorities. Many have been placed under house arrest and their communications with the outside world cut off, according to rights groups.

China has released the last of those arrested for directly taking part in the Tiananmen demonstrations, but others who seek to commemorate them have been rearrested for continuing their activism.

They include Huang Qi, founder of website 64 Tianwang that sought to expose official wrongdoing. Reportedly in failing health, he is serving a 12-year sentence after being convicted of leaking state secrets abroad.