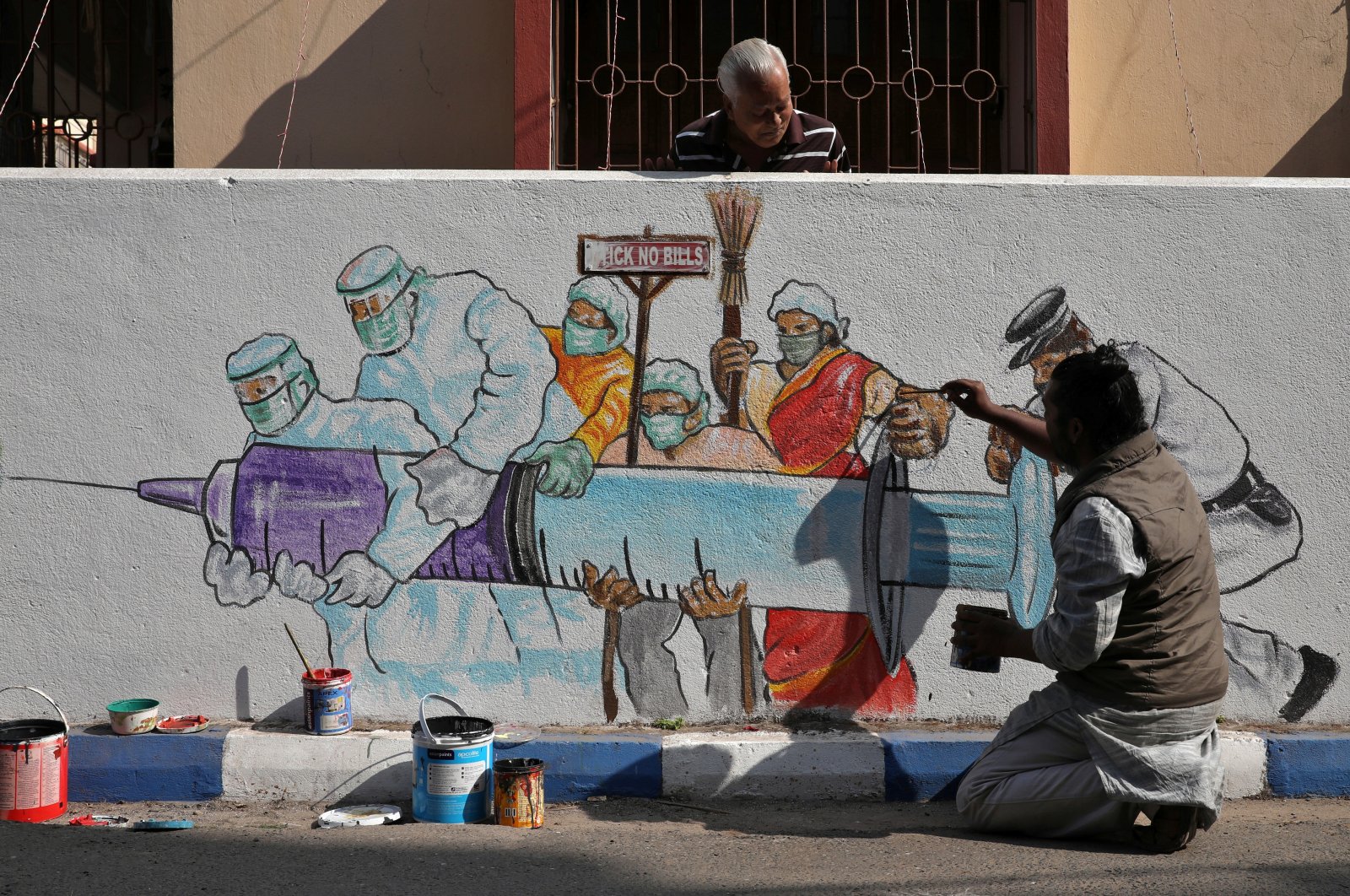 India authorized two COVID-19 vaccines on Sunday, paving the way for a huge inoculation program to stem the coronavirus pandemic in the world's second-most populous country. India's drugs regulator gave an emergency authorization for the vaccines developed by Oxford University and U.K.-based drugmaker AstraZeneca and another developed by the Indian company Bharat Biotech.

Drugs Controller General Dr. Venugopal G Somani said both would require two doses and the decision was made after "careful examination" by the Central Drugs Standard Control Organization, India's pharmaceutical regulator. Both vaccines are cheaper and easier to use than ones by Pfizer and Moderna since they do not require ultra-cold storage facilities.

The AstraZeneca-Oxford shot, already approved in Britain, Argentina and El Salvador, will take the lead and Bharat Biotech's COVAXIN will be administered under stricter conditions given no efficacy data has been released for it.

"It's now time to reap the benefits of the robust supply chain infrastructure we've put in place for quick and equitable distribution of the vaccine," said Harsh Vardhan, the health minister of India, which is the world's biggest vaccine producer and exporter. "Urge all citizens to entrust the stringent protocols followed for ensuring safety, efficacy and immunogenicity of the approved vaccines."

According to Somani the overall efficacy of the AstraZeneca-Oxford vaccine was 70.42%, while Bharat Biotech's COVAXIN was "safe and provides a robust immune response."

The British-developed AstraZeneca-Oxford shot is being made locally by the Serum Institute of India (SII) and will be branded COVISHIELD, while Bharat Biotech has teamed up with the government-run Indian Council of Medical Research.

A lawmaker from Prime Minister Narendra Modi's nationalist party had earlier complained about the apparent preference for the foreign-made vaccine instead of the local one, whose approval has also raised questions about a lack of transparency in the process.

"Vaccines of M/s Serum and M/s Bharat Biotech are being approved for restricted use in emergency situations," Somani said at a news conference, reading from a written statement.

Both vaccines will be administered in two doses and stored at 2-8 degrees Celsius (36 to 48 degrees Fahrenheit), he said, without clarifying what intervals between shots were being recommended. Sources said Saturday the doses would have to be given four weeks apart. The Bharat Biotech vaccine had been approved "in public interest as an abundant precaution, in clinical trial mode, to have more options for vaccinations, especially in case of infection by mutant strains," as reported by Reuters.

SII, the world's biggest vaccine producer, has already stockpiled more than 50 million doses of the AstraZeneca-Oxford vaccine even before securing a formal supply deal with the government.

"All the risks @SerumInstIndia took with stockpiling the vaccine, have finally paid off," CEO Adar Poonawalla said on Twitter. "COVISHIELD, India's first COVID-19 vaccine, is approved, safe, effective and ready to roll-out in the coming weeks."

The AstraZeneca-Oxford vaccine that granted its first approval by Britain last week, is cheaper and easier to use than some rival shots, such as one from Pfizer and Germany's BioNTech – a major advantage in tackling a pandemic that has claimed more than 1.8 million lives worldwide. The U.K. has registered a record 57,725 daily coronavirus cases Sunday. Government figures show the U.K. has recorded five straight daily highs – all above 50,000 and nearly double the levels of two weeks ago. Britain has seen 74,682 virus-related deaths in the pandemic, the second-highest total in Europe after Italy. Hospitals in Britain have started receiving batches of the coronavirus vaccine developed by Oxford University and AstraZeneca. Some 530,000 doses of the vaccine will be available for rollout across the country that begins Monday.

The British shot, however, has been plagued by uncertainty about its most effective dosage ever since data published in November showed a half dose followed by a full dose had a 90% success rate, while two full shots were 62% effective. The efficacy of the Indian vaccine could "go up much more" than 60% after two doses are given, a source with knowledge of the matter told Reuters. Bharat Biotech earlier said they could produce up to 300 million doses a year.

"While this vaccine addresses an unmet medical need during this pandemic, our goal is to provide global access to populations that need it the most," the company's chairman, Krishna Ella, said. "COVAXIN has generated excellent safety data with robust immune responses."

An opposition lawmaker and former minister, however, questioned the approval process for COVAXIN.

"Bharat Biotech is a first-rate enterprise, but it is puzzling that internationally accepted protocols relating to Phase 3 trials are being modified for Covaxin," Jairam Ramesh wrote on Twitter.

SII plans to sell the AstraZeneca-Oxford vaccine to the Indian government at about 250 rupees ($3.42) per dose and 1,000 rupees on the private market. The regulator on Sunday also permitted Cadila Healthcare Ltd. to conduct Phase 3 clinical trials on 26,000 Indian participants for its DNA-platform vaccine candidate, saying the interim trial data had shown it was "safe" and prompted an immune response under a three-dose regimen.

With vaccine production and mass inoculation programs likely to take months, countries have tightened restrictions to fight a virus resurgence as experts predict a sharp rise in cases after weeks of holiday gatherings. From local curfews to alcohol bans and complete lockdowns, governments are trying to tackle a surge in infections.

India has reported more than 10.3 million COVID-19 cases and around 150,000 deaths, though its infection rate has come down significantly from a mid-September peak.

In Bangkok, the city's nightlife shut down following a ban on bars, nightclubs and restaurant alcohol sales, among a raft of restrictions aimed at curbing Thailand's rising virus toll after an outbreak at a seafood market last month. Public schools in the Thai capital are also set to close for two weeks.

In Tokyo, the city's governor asked the Japanese government to declare a new state of emergency as the country battles a third wave, with record numbers of new cases. Concerns are growing ahead of hosting the Olympics in July.

And South Korea extended its anti-virus curbs until Jan. 17 in the greater Seoul area, including a ban on gatherings of more than four people, which will be widened to cover the whole country.

The Australian Capital Territory has shut out non-residents who have been in the northern beaches of Sydney, where the outbreaks are most concentrated, Greater Sydney and other smaller centers, unless they have an exemption.

In the U.S., the vaccine roll-out has been beset by logistical issues, while the world's worst-hit country has passed 20 million cases and 350,000 deaths. The U.S. has seen a surge in infections in recent months and on Saturday saw its highest single-day number yet, with more than 277,000 cases.

In Russia, Health Minister Mikhail Murashko said more than 800,000 people had received the domestically produced Sputnik V vaccine and that 1.5 million doses had been distributed throughout the country of around 147 million.

The Kremlin has held back on imposing nationwide virus restrictions, instead placing its hopes on the mass vaccination drive to end the pandemic and save its struggling economy.

Greece has tightened its lockdown for the next week, closing retail shops, hairdressers and bookshops. The restrictions come as the government plans to open all schools, from kindergarten to universities, on Jan. 11. Churches will remain closed and won't celebrate the annual Epiphany holiday on Jan. 6, nor will priests conduct the traditional blessing of the waters. Also, the nightly curfew will start at 9 p.m. The new rules take effect Sunday and run until Jan. 11. Greece announced 40 deaths and 262 new coronavirus infections Saturday. There have been 139,709 confirmed infections and 4,921 deaths since the start of the pandemic.