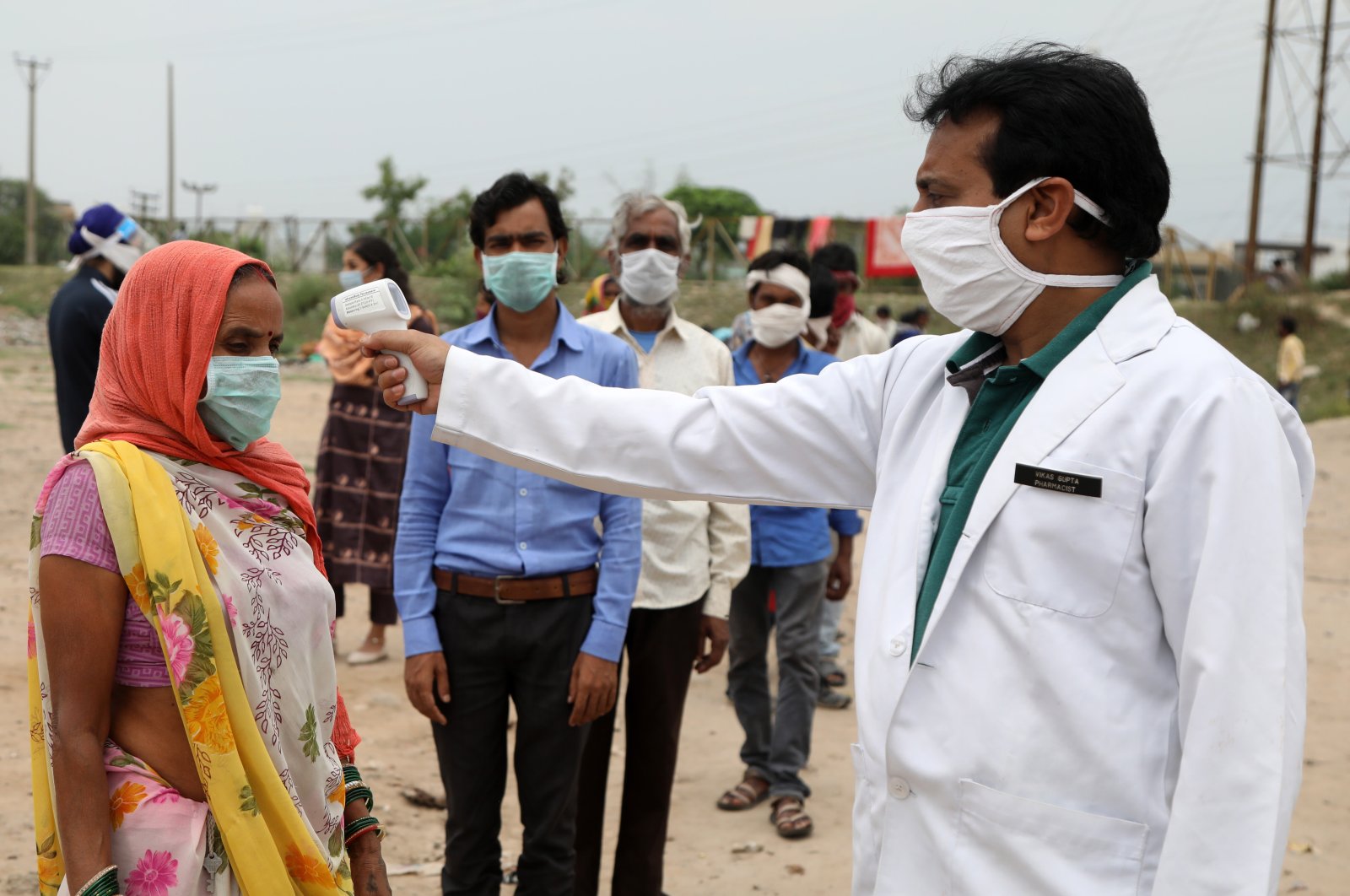 A health worker checks the body temperature of migrant laborers from Chhattisgarh state before sending them to their hometowns after they were stranded in an open area, in Jammu, India, June 11, 2020. (EPA Photo)
by Daily Sabah with AP Jun 11, 2020 3:49 pm
RECOMMENDED

India reported a new daily record high of coronavirus cases, while South Korea reported 45 new infections of COVID-19 on Thursday, all but two of them in the greater capital area, continuing a weekslong resurgence that health authorities fear will develop into a massive wave.

The figures announced by the Korea Centers for Disease Control and Prevention (KCDC) on Thursday brought national totals to 11,947 cases and 276 deaths.

The capital of Seoul reported 21 new infections, while 22 other cases were reported in nearby Incheon and Gyeonggi province towns.

The country has been reporting around 30 to 50 new cases per day since late May, mostly in the densely populated capital area where about half of South Korea’s 51 million people live.

Despite expressing concern over the steady rise in infections, government officials are resisting calls to reimpose stronger social distancing measures that were relaxed in April, citing concerns over hurting a fragile economy.

Their stance seems in contrast with the urgency conveyed by KCDC director Jung Eun-kyeong, who says health workers are struggling more and more to track transmissions that are spreading quickly and unpredictably as people increase their activities and practice less social distancing.

“There has been a consistent chain of transmissions spreading in the densely populated capital area. If we continue to fail to cut off these chains, we cannot rule out the possibility of a massive circulation,” Jung said during a virus briefing.

India reported a record of 9,996 new coronavirus cases over the past 24 hours with health services in the worst-hit cities of Mumbai, New Delhi and Chennai getting swamped by the rising infections. The Health Ministry on Thursday also reported an increase of 357 deaths. India’s tally of confirmed cases has reached 286,579, the fifth highest in the world, with 8,102 deaths. Most Indian states have lifted lockdown restrictions, with train services partially restored and shops and manufacturing reopened. Subways, hotels and schools remain shuttered nationwide. The Health Ministry said testing capacity has increased and the number of recovered patients has exceeded the number of active cases for the first time.

China’s foreign ministry has criticized a European Union report that alleged Beijing was spreading disinformation about the coronavirus pandemic. Ministry spokesperson Hua Chunying called the accusation against China “false information.” According to the European Commission, Russia and China have mounted “targeted influence operations and disinformation campaigns in the EU, its neighborhood and globally.” It was the first time China has been named by the EU executive as spreading disinformation. Hua also criticized Australian Prime Minister Scott Morrison for saying his country wouldn’t respond to Chinese coercion.

The two countries have been sparring over Australia’s calls for an inquiry into the coronavirus pandemic which have irked Chinese officials who see it as an attempt to blame Beijing. In recent weeks, China has banned Australian beef, slapped tariffs on Australian barley, and has issued travel and study warnings for Chinese citizens in Australia.

Beijing health authorities also said that a 52-year-old man is the first apparent case of local transmission of the coronavirus in the Chinese capital in weeks. The man, identified only by his surname, Tang, visited a hospital Wednesday with a fever, deputy district head Miu Jianhong said Thursday. Tang’s neighborhood was closed off for disinfection and health checks, and two family members were isolated for observation. Tang reported that he had not left Beijing for more than two weeks, roughly the virus’s incubation period, and had not been in contact with anyone from outside the city.

Beijing has gradually opened up following a sharp decline in new cases, although authorities are on guard for new outbreaks resulting from loosened social distancing rules. On Saturday, the city said residents no longer need to wear masks when outside, and all primary school classes and kindergartens were allowed to resume.

A temple that is one of Thailand’s major tourist attractions has barred entry to foreigners, professing fear they could spread the coronavirus. Signs at the main gate of Wat Pho, a Buddhist temple adjacent to the Grand Palace in Bangkok, say in English “Open for Thai only” and “NOW NOT OPEN FOR FOREIGNERS.” The temple, one of the country’s grandest, houses a 46-meter-long (151-foot-long) reclining Buddha. The temple was closed to all visitors for two months until last week in compliance with a government directive to fight the coronavirus.

Police fired a water cannon and tear gas to break up a protest Thursday against the government's handling of the coronavirus outbreak. About 1,000 people gathered on the road leading to the prime minister's office in Kathmandu demanding more testing and alleging corruption by officials in the purchase of equipment and testing kits. Riot police warned the protesters they were violating lockdown rules by gathering in large numbers and not following social distancing rules, then forced them back with the water cannon. Police broke up a smaller protest on Tuesday. The government is planning to ease the country's lockdown this week to allow businesses to reopen and vehicles to return to the roads. Nepal has reported 4,364 cases and 15 deaths.