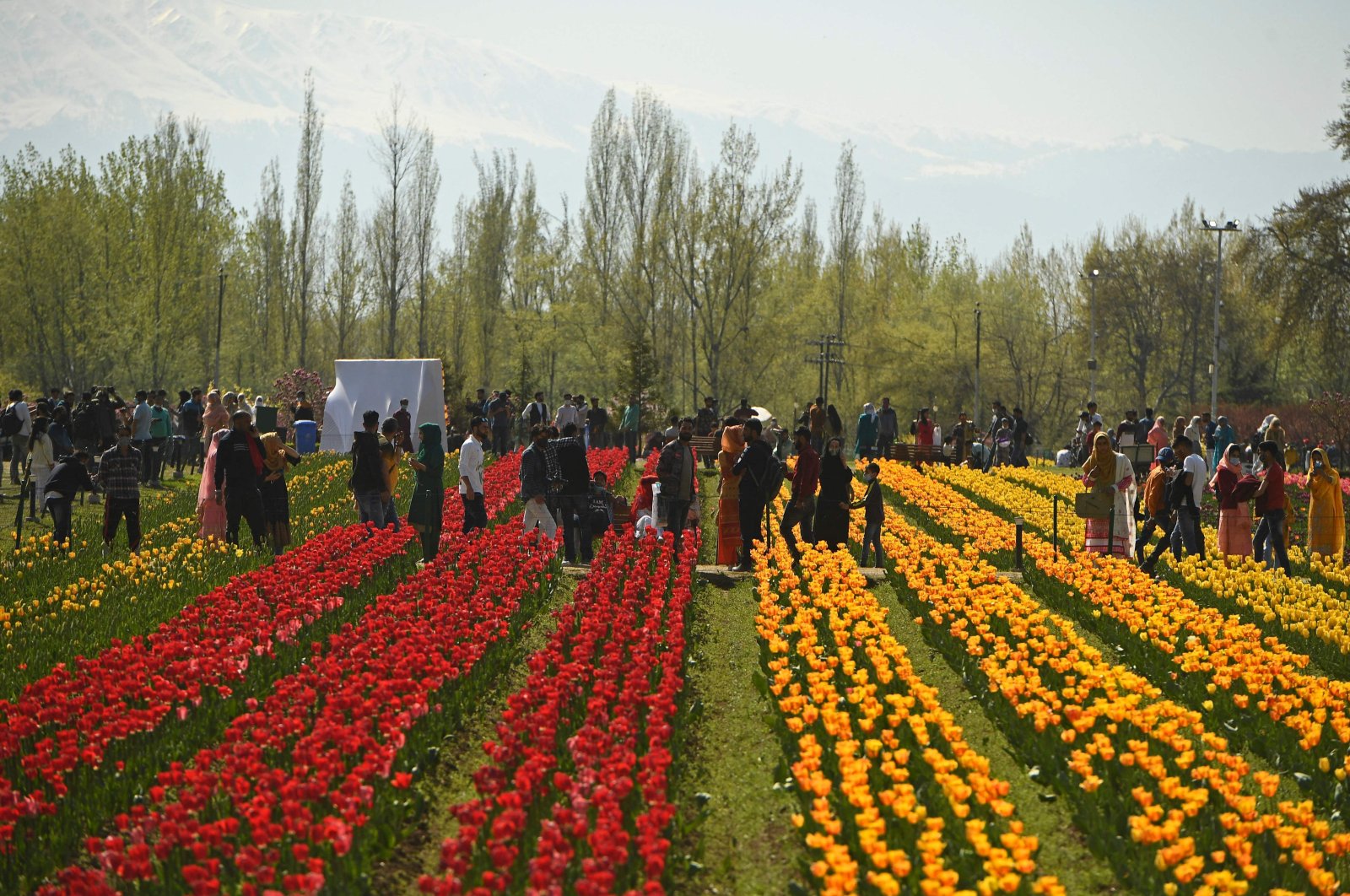 Visitors stroll around the grounds at the inauguration of Tulip festival at the Tulip garden in Srinagar, Kashmir, April 3, 2021. (AFP Photo)
by Anadolu Agency
Apr 09, 2021 12:01 pm

Indian authorities in the disputed Himalayan region Kashmir are eagerly awaiting the arrival of new tourists despite the resurgence of coronavirus infections and a fragile health system.

Manoj Sinha, the disputed region's Lt. governor, said on April 3 that despite a surge in COVID-19 cases, tourism "would be taken to new heights.”

When his statement, which was prominently headlined in local newspapers, was being read the next morning, the government ordered schools to suspend classes up to grade nine for 15 days. Classes were previously being held only three times a week alternately while adhering to several other safety measures.

On April 5, the leaves sanctioned or those under consideration for doctors, nurses and paramedics were also canceled, given the surge in COVID-19 cases.

Amir Ali, the director of the disaster management department, recently posted a photo on his Facebook account of Indian tourists and local visitors huddled outside the gate of the Tulip Garden in Srinagar, whose opening in spring has become a big event on the tourist calendar.

Successive Indian governments have likened a higher number of tourists visiting the Himalayan valley as a sign of normalcy. But the past 30 years of insurgency, punctuated by the most intense anti-India uprisings in 2008, 2010 and 2016, have shown how fragile peace could be.

After scrapping the country's only Muslim-majority region's autonomous status in 2019, raising fears of ethnic flooding by Hindus, New Delhi is keen on demonstrating to the world that the region is peaceful amid several damning United Nations reports highlighting repressive measures, curbs on freedoms and rights violations since 2019.

Several delegations of foreign envoys have been taken on "guided tours” of some areas of the region since August 2019.

"Peace has returned to Kashmir after so many decades. It's time we must cash in on this,” Lt. Governor Sinha said, after inaugurating a six-day "Tulip Festival” at the tulip garden, believed to be Asia's largest.

In a tweet, Indian Prime Minister Narendra Modi also urged his countrymen and foreigners to visit the garden in large numbers. More than $100 million have been earmarked for tourism promotion in this financial year's budget of the region, and security has been promised to Bollywood producers for shooting films in the region.

Kashmir's economy suffered losses worth millions of dollars because of a military and communications lockdown imposed by the Indian government after Aug. 5, 2019, when it scrapped its special status, and later because of COVID-19 restrictions.

Therefore, traders associated with the tourism industry, as well as hoteliers, recently urged the government to give up any thought of another lockdown. But authorities have been criticized for lax COVID-19 measures, especially regarding the events that strengthen its "normalcy” narrative.

Two tourists died of COVID-19 at Srinagar hospitals during the past 10 days. Both had tested negative on arrival at Srinagar airport, where each incoming traveler is tested using the rapid antigen test (RAT), which is not as accurate as the reverse transcription-polymerase chain reaction (RTPCR) method.

Several other infected tourists are undergoing treatment at two hospitals. Meanwhile, travelers entering Kashmir by road are not tested. A top health official in charge of anti-COVID 19 measures told Anadolu Agency (AA) on the condition of anonymity that since there is no lockdown, tourists and native travelers will continue to come and leave Kashmir. But, he said, the government needs to streamline testing.

"Rather than testing them at the airport, tourists should get tested in their native locations before landing here. This will save them the hassle because their travel plans would be completely spoiled if they are asked to quarantine themselves after landing here and testing positive,” he said.

According to data accessed by AA, as many as 900 travelers to Kashmir, including tourists, tested positive in March.

Afaq Sayeed, a member of SRO Batamaloo, a charity based in Srinagar, said the unregulated flow of tourists "was a disaster” at a time when the region is witnessing another wave of infections. The charity provides oxygen, ambulances and other medical support to COVID-19 patients.

"Our supply of oxygen equipment is depleting fast. Given the frequency of distress calls we receive, I think we are up against an even more intense phase than the first," he said. "Health care facilities will soon be overburdened. In such a situation, tourism wouldn't help. At least the government should ensure that tourists have RTPCR-negative certificates when they come here."

Kashmir, which is held by India and Pakistan in parts and claimed by both in full, has registered over 134,000 COVID-19 cases, including 2,018 related deaths. Since they were partitioned in 1947, the two South Asian countries have fought three wars, two of them over Kashmir.

Some Kashmiri groups have been fighting against Indian rule for independence or unification with neighboring Pakistan. According to several human rights organizations, thousands of people have been killed and tortured in the conflict that flared up in 1989.