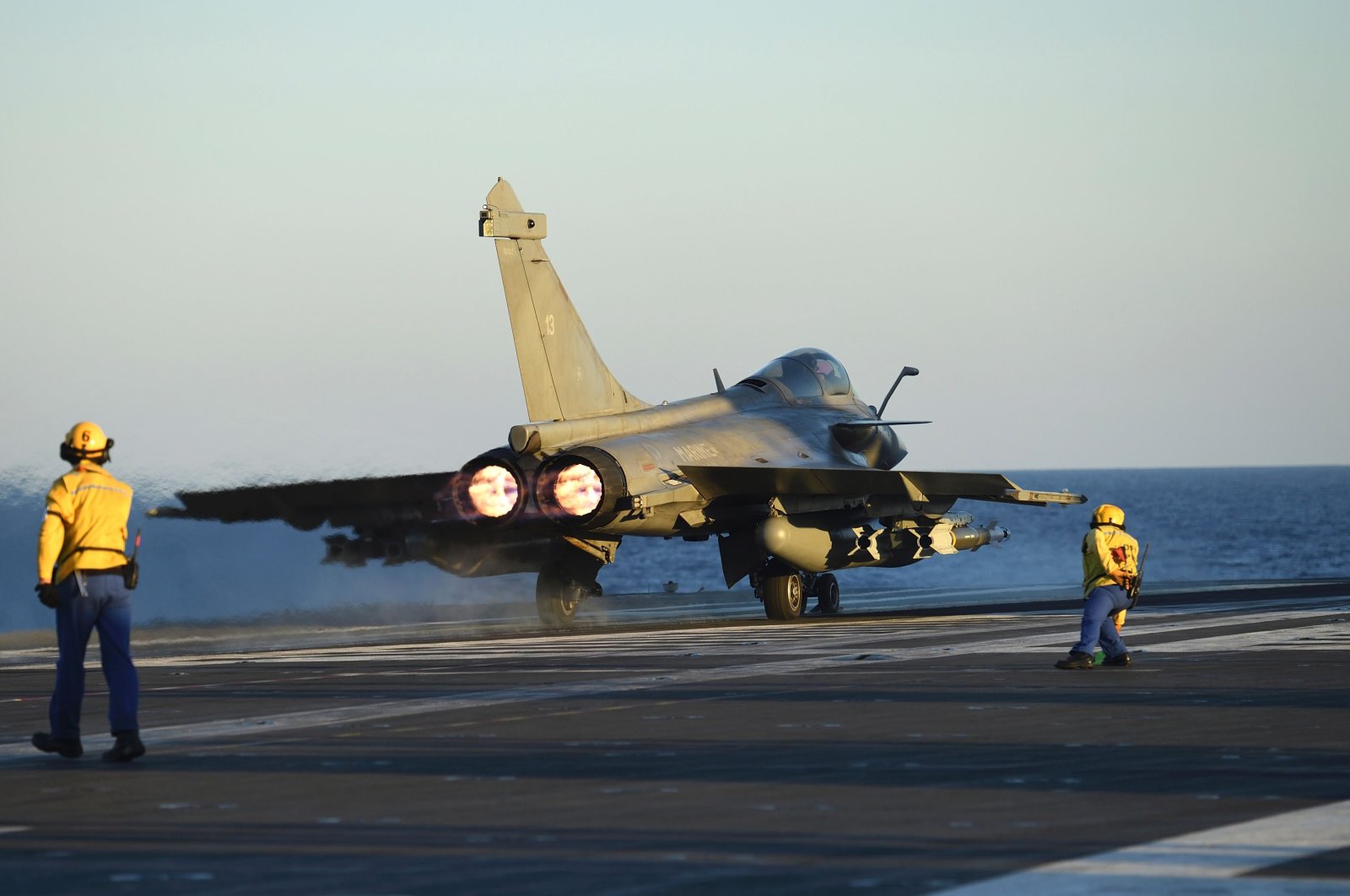 A Rafale fighter jet is ready to be catapulted from the French aircraft carrier Charles de Gaulle at the start of the Operation Arromanches 3 in east Mediterannee sea, on September 30, 2016. (AFP Photo)
by Anadolu Agency
Jul 27, 2020 5:57 pm

With plans to add five French-made Rafale jets to its arsenal this month, the Indian Air Force is set to boost its military capabilities, say security experts.

"The political controversy over the Rafale contract was unfortunate as it had a direct bearing on India's defense preparedness. Acquisition of Rafale and other medium multi-role combat aircraft is important as it will be difficult for India to keep pace with the evolving security threats, particularly one posed by China. I think it's time that the political quibble over this should end," Sameer Patil, fellow for international security studies at Gateway House, a Mumbai-based foreign policy think tank, told Anadolu Agency (AA).

A multi-billion-dollar deal to buy French warplanes had triggered a political debate in the country, with the main opposition Congress Party accusing Prime Minister Narendra Modi of making the purchase at a price three times higher than what had been negotiated in 2014, when the Congress was in power. The Congress has demanded Modi be investigated for his "actions" in the deal.

Retired Air Marshal PK Barbora told AA that he hoped there would be no politics involved in the matter and that the induction would be smooth.

"(...) the deal will go through and I see no reason that there should be any kind of politics. I don't think any politics (will take place now), because the Supreme Court has already ruled about it (...) Induction is going to take place in ordinarily fashion and induction is going to be very smooth," said Barbora.

The Supreme Court in November last year rejected all petitions related to the Rafale jet deals. In 2018, the apex court exonerated the government on allegations of irregularities in the procurement of 36 Rafale fighter jets by India from France

Senior Indian Defense expert Ajai Shukla said on Twitter: "I think it's time to close the chapter and the endless politicization of the Rafale. We cannot allow it to become another Bofors."

A statement issued by the Ministry of Defence on Monday said the first five Indian Air Force (IAF) Rafales had taken off in the morning from the Dassault Aviation Facility in Merignac, France, including three single-seater and two twin-seater aircraft.

It also said that the jets would likely arrive at the Air Force Station in the northern Ambala region on Wednesday "subject to weather." "No 17 Squadron, the 'Golden Arrows,' is being raised at this base equipped with Rafale aircraft," the statement said.

Noting that the IAF was suffering from "depleting squadron strength," Barboda said the arrival of the jets "would definitely boost the capability."

Though the number of planes may not improve much, the capability and potential of IAF will improve, he said. "This aircraft is a versatile aircraft. It meets all present requirements."

Patil shared Barboda's view, saying the Rafale deliveries would "fill the void" created by the phasing out of the Soviet origin MiG21 fighter jets.

"The delay in their (Rafale) induction had affected IAF's modernization plan. However, their induction could not have come at a better time with the ongoing LAC (Line of Actual Control) stand-off with China."

Tensions have risen between New Delhi and Beijing amid a border standoff in the Himalayan Ladakh region along the Line of Actual Control, a de facto frontier between India and China. Experts say the aircraft may not immediately be used at the LAC.

"The induction of Rafale is as per contracted delivery schedules, and the six or so aircraft in IAF service have no role and will make no difference whatsoever to the Sino-Indian border crisis in eastern Ladakh," Bharat Karnad, a strategic affairs analyst at the Center for Policy Research in New Delhi, told AA. "It will make only a marginal difference to the country's air order of battle because owing to their small numbers – 36 in all – and high cost, the IAF will be loath to deploy them on risky missions."

"We got more than adequate assets, which we are already using. I am quite sure that we can address the threats, with the existing resources," says Barbora.