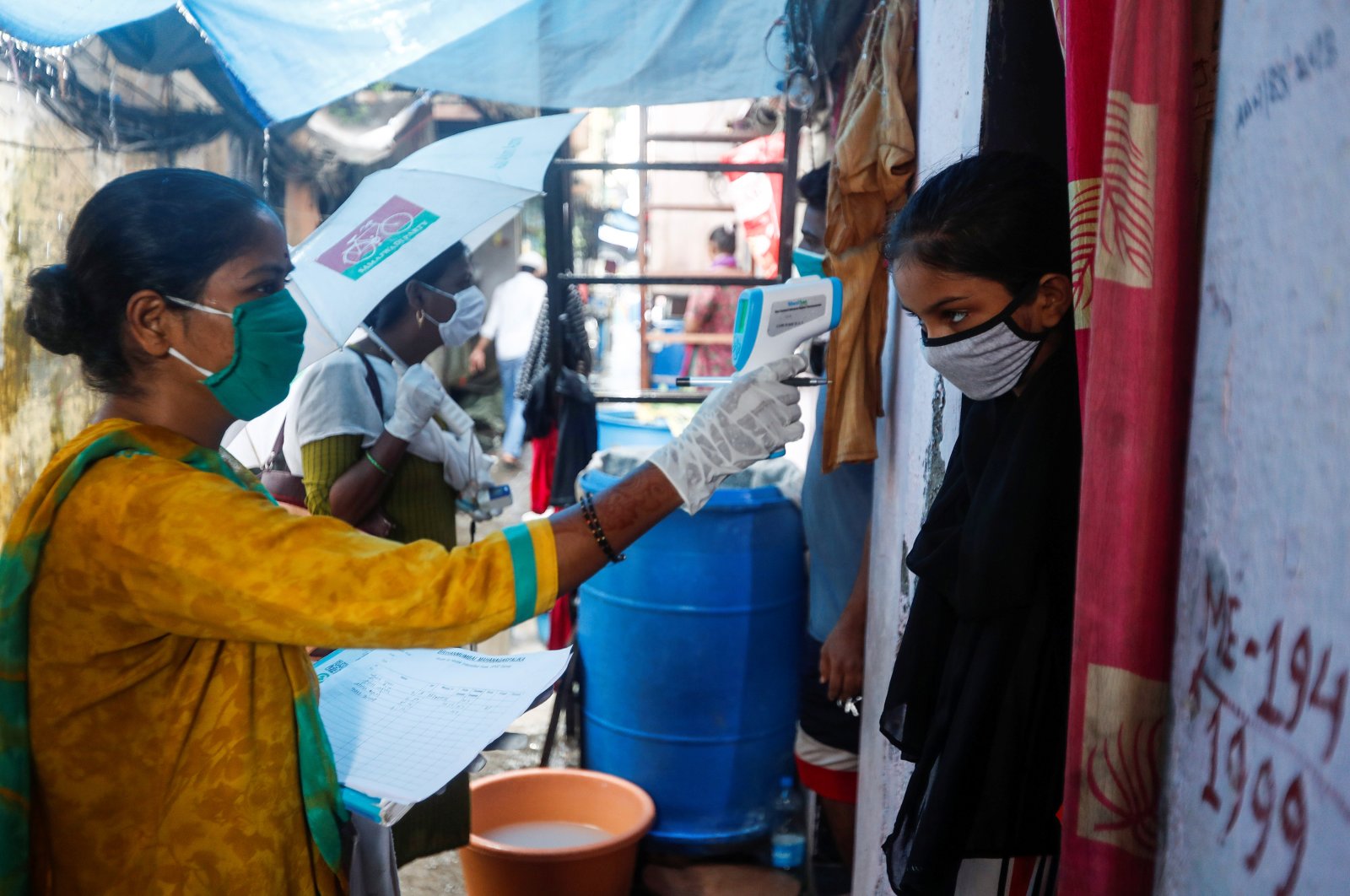 A community health volunteer checks the temperature of a girl during a checkup campaign at a slum in Mumbai, India, Aug. 17, 2020. (Reuters Photo)
by DAILY SABAH WITH AGENCIES Aug 17, 2020 2:52 pm

India reported 941 coronavirus fatalities in one day, followed by Brazil and the U.S., as the global death toll surpassed 770,000

As the global coronavirus death toll surpassed 770,000, India reported the highest daily number of fatalities with 941 recorded deaths on Sunday, followed by Brazil and the United States.

India's COVID-19 death toll topped the 50,000 mark Monday, becoming the fourth-highest toll from the virus in the world, behind the U.S., Brazil and Mexico, as the pandemic continues to cause suffering across the world.

The world's second-most populous country recorded 57,981 new coronavirus infections in the last 24 hours, raising the total to nearly 2.65 million, while an additional 941 deaths raised the overall death toll to 50,921. India is only the third country, behind Brazil and the U.S., to record more than 2 million infections, but it has a relatively lower death rate of 1.9%, compared with the world average of 3.5%.

Experts have said India's testing rates are far too low, and this could obscure the true extent of the coronavirus outbreak.

India has been posting at least 50,000 new cases per day since July 30 as the disease has spread from major cities like Mumbai and Delhi into the impoverished hinterlands of densely populated states like Uttar Pradesh and Bihar. Prime Minister Narendra Modi imposed a strict lockdown on March 25 to curb the outbreak. Restrictions have gradually been eased since early June, but in many parts of India, public transport, cinemas and malls remain closed, making it difficult to rescue the economy from a slowdown that shows no signs of abating.

The coronavirus has killed at least 770,429 people since the outbreak emerged in China last December. On Sunday, 4,222 new deaths and 225,457 new cases were recorded worldwide. The U.S. is the worst-hit country with 170,052 deaths from 5.4 million cases. More than 1.8 million people have recovered.

In East Asia, South Korea has witnessed a sharp increase in COVID-19 cases, registering 197 cases Monday and over 279 Sunday. This is the highest number since March, Yonhap news reported. Most of the new cases are locally transmitted. South Korea's total cases have climbed to 15,515 with Seoul and its neighboring areas being the most affected. A conservative South Korean pastor who has been a bitter critic of the country's president tested positive for the coronavirus, health authorities said Monday, two days after he participated in an anti-government protest in Seoul that drew thousands. More than 300 virus cases have been linked to Rev. Jun Kwang-hun's huge church in northern Seoul, which has emerged as a major cluster of infections.

In Europe, the French government sent riot police to the Marseille region to help enforce mask requirements, as more and more towns and neighborhoods are imposing mask rules starting Monday to slow rising infections. Government spokesperson Gabriel Attal announced Monday that 130 police officers are being sent to the Marseille region, which expanded its outdoor mask requirements to all farmers’ markets and more neighborhoods Friday.

France has seen scattered incidents of violence by people refusing to wear masks. Paris expanded its mask requirements Saturday, and other towns around France started requiring masks outdoors on Monday.

Infections have been accelerating around France in recent days, with 3,015 new cases Sunday, one of the highest daily spikes since the country lifted a strict two-month lockdown in May. More than 30,400 people have died with the virus in France, one of the highest death tolls in the world.