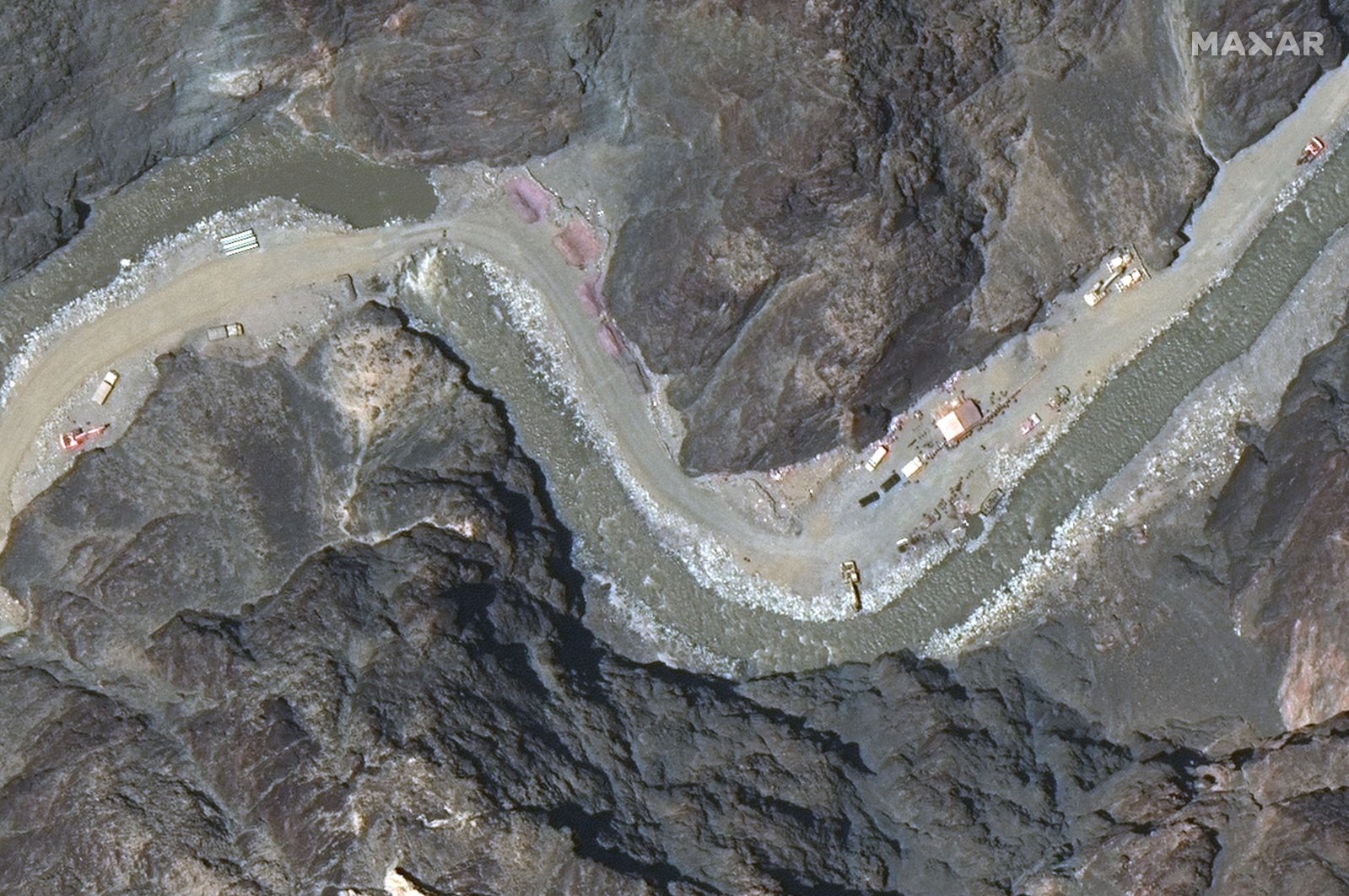 A satellite image provided by Maxar Technologies shows a road under construction near the Line of Actual Control, the border between India and China, June 22, 2020. (Maxar Technologies via AP)
by French Press Agency - AFP Jun 24, 2020 1:27 pm
RECOMMENDED

Indian fighter jets roared over a flashpoint Himalayan region Wednesday as part of a show of strength following what military sources say has been a Chinese takeover of contested territory.

Chinese forces have held onto a chunk of land covering several square kilometers at the mouth of the Galwan valley following a deadly brawl there on June 15, the Indian military sources told Agence France-Presse (AFP).

The two sides publicly declared they would pull back following the clash, which saw 20 Indian soldiers killed in a battle involving rocks and nail-studded batons.

But both have maintained troops around the valley, with India deploying more forces and trying to project military might.

Indian jets regularly took off Wednesday from a military base in Leh, the main Indian town in the contested region, and headed toward the mountainous border 240 kilometers (150 miles) away.

There were also checkpoints on main roads out of Leh and a frenzy of military activity around the main town, which lies at 3,500 meters (11,500 feet).

Residents reported long lines of military trucks and artillery on roads near Leh.

"We now have a good strength present in the area," an official of the Indian army's Northern Command told AFP on condition of anonymity, referring to the reinforcements.

Tashi Chhepal, a retired Indian army captain who has served in the area and is based in Leh, said the mobilization was unprecedented in a sensitive region touching Pakistan as well as China.

"I haven't seen this kind of military movement before," he told AFP.

After the latest round of talks between military commanders Monday, Chinese foreign ministry spokesman Zhao Lijian said the two sides had "agreed to take necessary measures to promote a cooling of the situation."

But they made similar comments after a fist-fight in May that proved to be a warmup for the medieval-style battle at Galwan.

Images taken Sunday by the U.S. satellite firm Maxar showed trucks and huts at camps on the river at 4,500 meters (15,000 feet) near the scene of the fighting. It was not clear whose army they were.

The two countries fought a border war in 1962, but this month's fighting was their deadliest encounter in 53 years.

According to Indian military sources, Chinese troops ambushed Indian soldiers and forced them down a ridge where they had gone to remove a Chinese "encroachment."

A bilateral accord prevents the use of guns, but the fighting was still fierce, reportedly with rocks and batons wrapped with barbed wire.

China has in turn accused Indian soldiers of twice crossing the Line of Actual Control, the unofficial boundary, provoking its troops.

But the Chinese appear to be sticking to their gains at Galwan and the nearby Pangong Tso lake, police intelligence as well as military sources told AFP.

China is now claiming the valley as its own, in statements that India has rejected.

Indian analysts are dubious of the chances of a major easing of the tensions or that India will reclaim the territory.

Harsh Pant from the Observer Research Foundation think-tank in New Delhi said: "Anything that the Chinese now say can't be taken on face value. India, hopefully, has learned its lessons now."

Amid calls for a boycott of Chinese goods, media reports say Indian Prime Minister Narendra Modi's government could make it more difficult for Chinese companies to do business.

But analysts say there is recognition on both sides that their economies need each other.

"There may be some short-term public backlash against China in India, but publicly, Pakistan swamps China as a perceived threat," said Vipin Narang, a security specialist at the Massachusetts Institute of Technology.

"The effects of this crisis, even if it slow burns, may be short-lived amongst India's public. And cheap TVs are still cheap TVs."