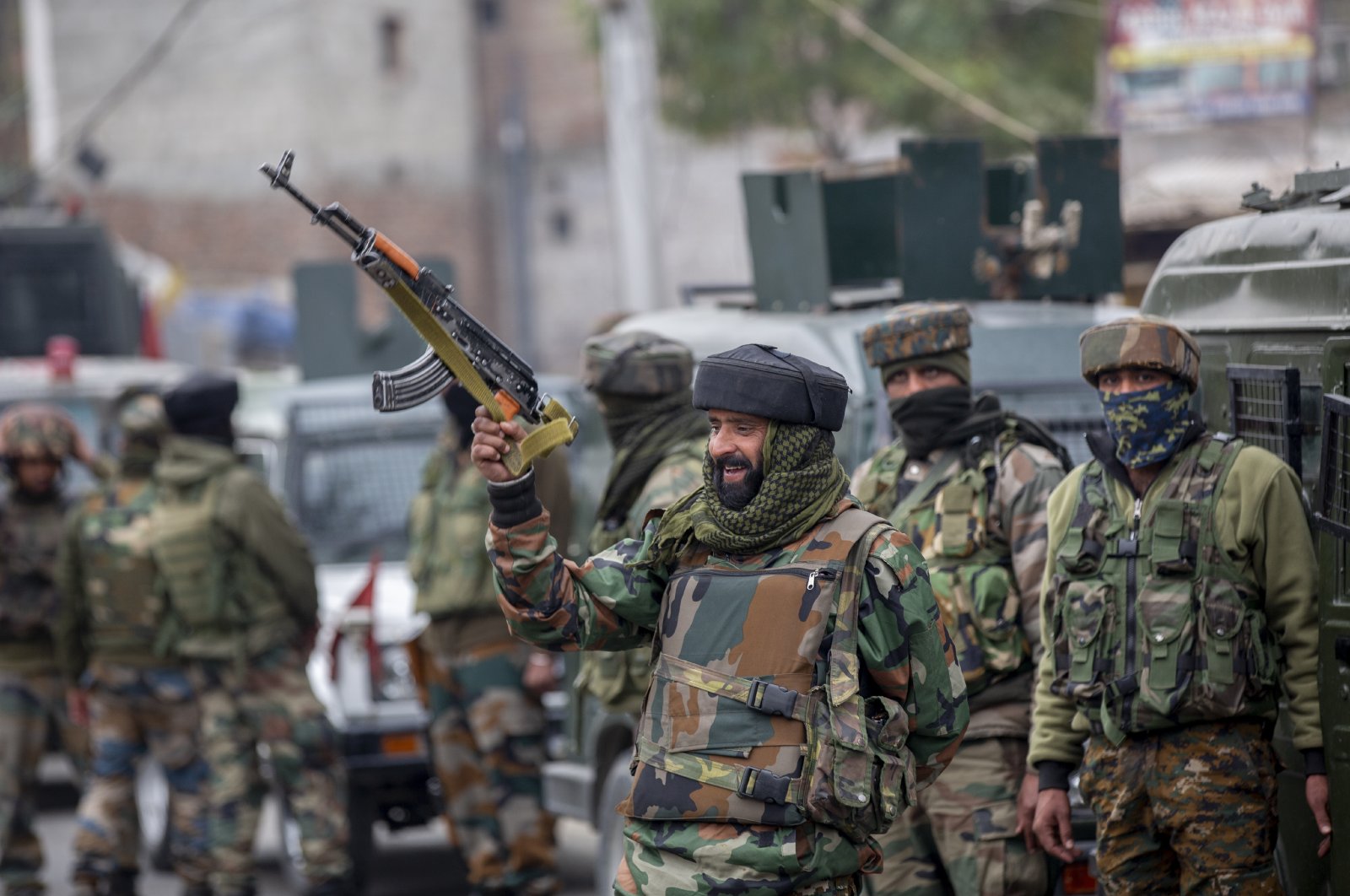 An Indian army soldier lifts his gun to chase away a stray dog near the site of a gun battle on the outskirts of Srinagar, Indian controlled Kashmir, Sunday, Nov. 1, 2020. (AP Photo)
by Agencies Nov 01, 2020 8:16 pm
RECOMMENDED

Kashmir region's Inspector General of Police Vijay Kumar said that Mir, the operational chief commander of Hizbul Mujahideen - a militant outfit active in the region - was killed while a suspect was held during a gunfight in the Rangreth area on the outskirts of the Srinagar city, Anadolu Agency (AA) reported.

"On the basis of a specific lead, joint teams of police and CRPF (India's Central Reserve Police Force) laid a cordon in Rangreth and later the army also joined in the operation to eliminate the holed up commander," Kumar said.

The killing takes the number of militants killed in the Muslim-majority region this year by Indian troops to 190, he told Reuters.

Kumar referred to the killing of Mir as a "big success" of the security forces and "an important achievement towards the elimination of militancy."

Mir took over the leadership of the group in the portion of Kashmir controlled by India after its previous chief, Riyaz Naikoo, was killed in a gun battle with Indian troops in May.

Mir joined militant ranks in 2014 and operated under slain commander Burhan Wani - a top militant leader who was killed in an encounter with Indian forces in 2016 and has since become a symbol of the protest against the government in the disputed territory.

Earlier in the day, Director General of Police Dilbagh Singh said militancy had been eradicated to a large extent in the region of northern Kashmir while infiltration at the Line of Control, a de facto border that divides the disputed valley between the two neighbors India and Pakistan, has also been plugged.

Kashmir, a Muslim-majority Himalayan region, is held by India and Pakistan in parts and claimed by both in full. A small sliver of Kashmir is also held by China. Since they were partitioned in 1947, New Delhi and Islamabad have fought three wars - in 1948, 1965, and 1971 - with two of them over Kashmir.

Additionally, in the Siachen glacier in northern Kashmir, Indian and Pakistani troops have fought intermittently since 1984 with a cease-fire taking effect in 2003.

The COVID-19 pandemic slowed down development work and members of Modi's Bharatiya Janata Party (BJP) have increasingly been targeted by militants.