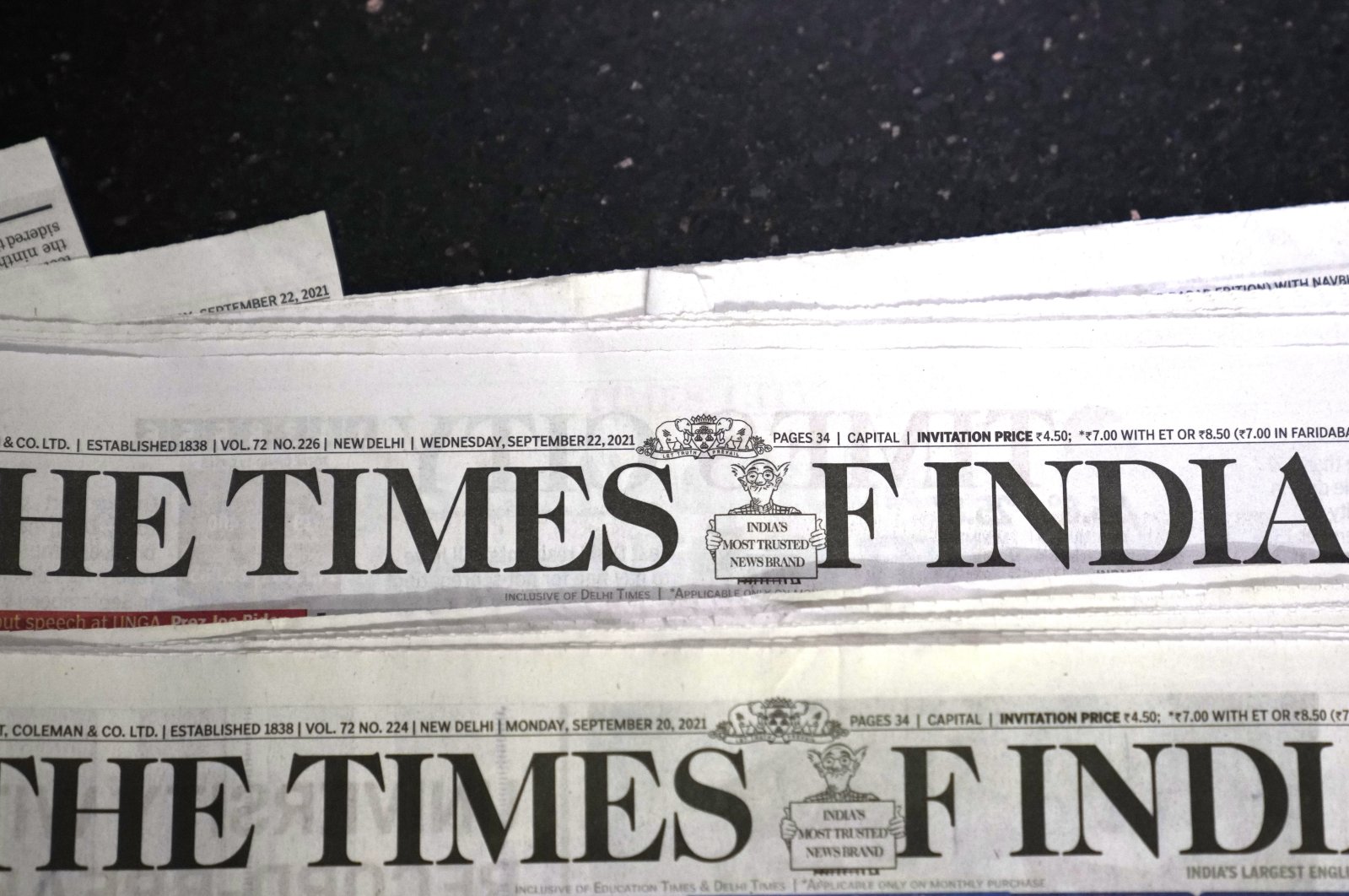 The logo of Bennett, Coleman and Company Limited, an Indian media conglomerate, is seen on The Times of India, one of their newspapers, in New Delhi, India, Sept. 22, 2021. (AP Photo)
by ASSOCIATED PRESS Sep 22, 2021 3:52 pm
RECOMMENDED

The Insikt Group, the threat research division of Massachusetts-based Recorded Future, said the hacking group, given the temporary name TAG-28, made use of Winnti malware, which it said is exclusively shared among several Chinese state-sponsored activity groups.

Chinese authorities have consistently denied any form of state-sponsored hacking and said China itself is a major target of cyberattacks.

The allegation has the possibility of increasing friction between the two regional giants, whose relations have already been seriously strained by a border dispute that has led to clashes this year and last year.

In its report, the Insikt Group suggested the cyberattack could be related to those border tensions.

“As of early August 2021, Recorded Future data shows a 261% increase in the number of suspected state-sponsored Chinese cyber operations targeting Indian organizations and companies already in 2021 compared to 2020,” the organization said in a report.

The Insikt Group said it detected four IP addresses assigned to the Bennett Coleman And Co. Ltd. media company in “sustained and substantial network communications” with two Winnti servers between February and August.

It said is observed approximately 500 megabytes of data being extracted from the network of the privately owned Mumbai company, whose publications include The Times of India.

Insikt said it could not identify the content of that data, but noted that the company frequently publishes reports on China-India tensions, and that the hack was likely motivated by “wanting access to journalists and their sources as well as pre-publication content of potentially damaging articles.”

Rajeev Batra, chief information officer for Bennett Coleman, said the company also received information on the suspected hack from CERT-In, the government agency that deals with cybersecurity threats, and responded to it several weeks ago.

Most of the data was in the “DNS queries category, which got blocked/dropped at our defense infrastructure,” he said in an emailed comment. The company's own investigation of the hack classified the incident as “non-serious alerts and false alarms,” he said.

The Insikt Group said it also observed about 5 megabytes of data transferred in a similar fashion from the police department of Madhya Pradesh state, whose chief minister, Shivraj Singh Chouhan, called for a boycott of Chinese products after June 2020 border clashes with India.

The police department did not immediately respond to an email seeking comment.

As the group was investigating the Bennett Coleman hack, it said it also identified a compromise in June and July of the Unique Identification Authority of India, or UIDAI, the government agency that oversees the national identification database.

In that case, it detected about 10 megabytes of data downloaded from the network and almost 30 megabytes uploaded, “possibly indicating the deployment of additional malicious tooling from the attacker infrastructure.”

It suggested such a database could be used by hackers to identify “high-value targets, such as government officials, enabling social engineering attacks or enriching other data sources.”

UIDAI told The Associated Press that it had no knowledge of a “breach of the nature described.”

“UIDAI has a well-designed, multi-layered robust security system in place and the same is being constantly upgraded to maintain the highest level of data security and integrity,” the agency said.

Recorded Future said all victims of the hacks were notified ahead of the publication of the report and provided with its full findings.