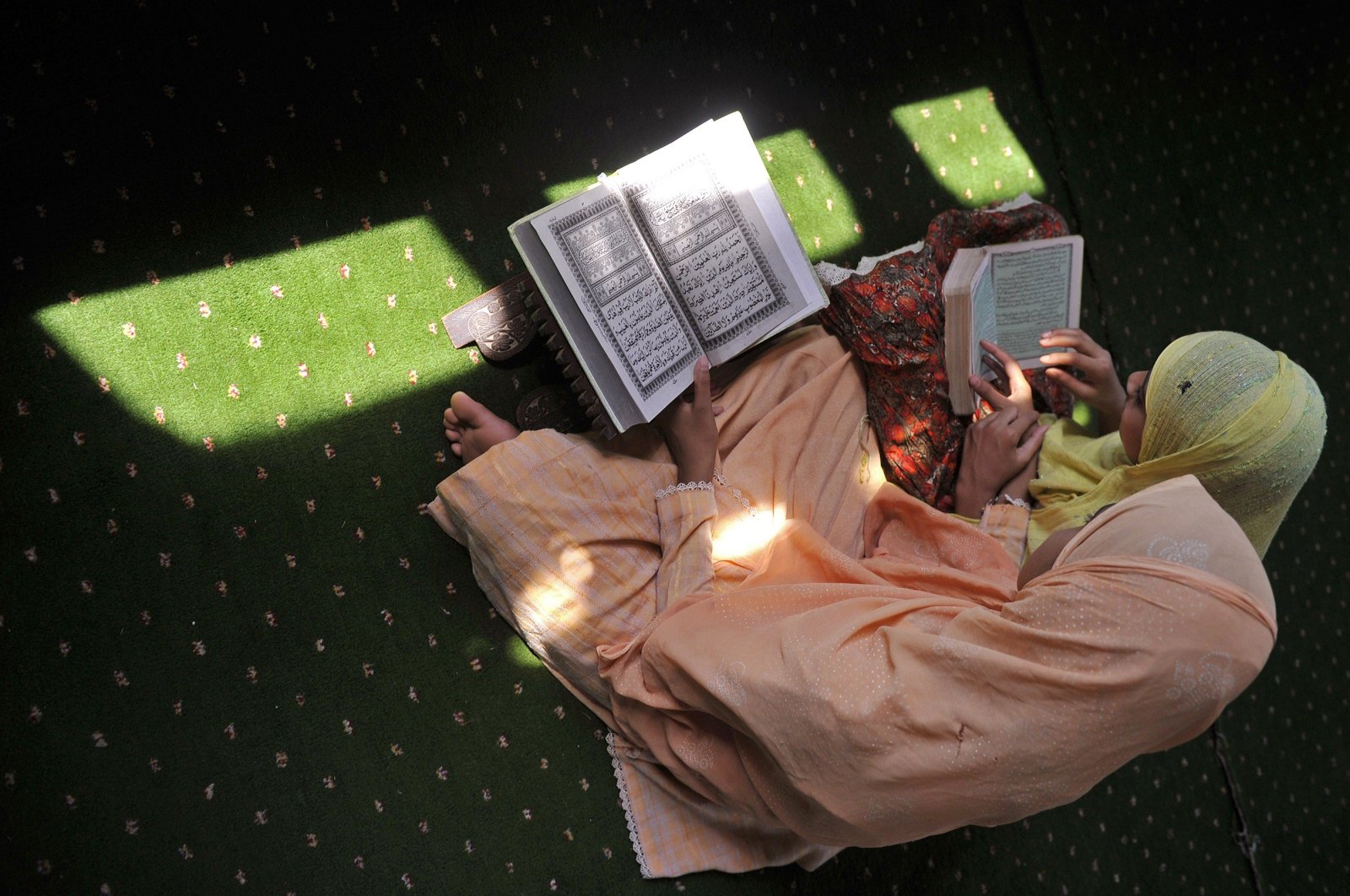 Two Kashmiri Muslim women read the Quran at the Shahi Hamdan shrine on the first Friday of Ramadan in Srinagar, Kashmir, India, Aug. 5, 2011. (AFP Photo)
by Daily Sabah with AFP Jul 13, 2021 9:57 am
RECOMMENDED

Pictures of more than 80 Muslim women from India were uploaded in recent weeks on an online platform to be sold off in fake "auctions" without their knowledge, generating widespread condemnation and severe backlash among communities.

According to media reports, dozens of photographs were put up on GitHub, which is an open software development platform, under the title "Sulli deal of the day." "Sulli" is derogatory slang used by right-wing Hindus for Muslim women. The pictures of activists, students and journalists could be seen at the fake auction.

“That night, I didn’t reply to the people who messaged me. I just logged out of my Twitter. I didn’t have the energy to respond,” Afreen Fatima told Qatar-based media outlet Al-Jazeera after she found out on July 4 that her picture has been also placed under "deal of the day."

“I was just so disturbed; I couldn’t sleep,” she said, adding that it came right away after a Hindu far-right man called for the abduction of Muslim women in Pataudi, near New Delhi.

Another victim Hiba Beg from New York said she discovered her picture on the app as she had just returned from enjoying Independence Day celebrations in the city. Beg said she suffered from "feelings of dehumanisation and defeat.”

Following complaints and outcry, GitHub took it down. “We suspended user accounts following the investigation of reports of such activity, all of which violate our policies,” a GitHub spokesperson told Al-Jazeera. “GitHub has longstanding policies against content and conduct involving harassment, discrimination, and inciting violence.”

Indian police launched an investigation over the sale of dozens of Muslim women on the platform in a case that victims say illustrates the growing Islamophobia across the country.

Hana Mohsin Khan, an airline pilot, was alerted last week by a friend who directed her to a link that led to a gallery of images of women.

"The fourth picture was mine. They were literally auctioning me as their slave for the day," Khan told Agence France-Presse (AFP). "It sends chills down my spine. From that day till today, I am just in a constant state of anger," she said.

Delhi police have filed charges – but against unknown persons, because they do not know the identity of the perpetrators.

Sania Ahmad, 34, who also found herself "up for sale" last week, points the finger at what she calls an online troll army of Hindu zealots in India that has proliferated in recent years. They have become adept at hounding people including journalists and activists with thousands of abusive messages to the extent that some shut down their social media accounts.

Many among India's 170 million Muslims say they feel like second-class citizens since Prime Minister Narendra Modi's Hindu nationalist Bharatiya Janata Party (BJP) came to power in 2014. A string of lynchings of Muslims by Hindu mobs over so-called cow protection – a sacred animal for many Hindus – and other hate crimes have sown fear and despair in the community.

Indian journalist Fatima Khan, who was also among the women targeted on GitHub, said the fake "auction" fit into this pattern.

"How is this acceptable? What will be the punishment, if any, meted out to the people who made this list?" she tweeted. "Muslim men are lynched, Muslim women are harassed and sold online. When will this end?"

Online harassment of women and girls – including threats of violence, rape and manipulated pornographic images – is a huge problem, not just in India. A 2020 survey by U.K.-based Plan International of 14,000 girls in 31 countries found more than half had been victims of such treatment.

"Rather than free and empowered to express themselves online, girls are all too often harassed, abused and driven from online spaces," it said.

In India, Muslim women are particularly targeted, said Ahmad, 34, who works for an Indian media company.

"It starts with petty abuse and grows into death and rape threats," she told Agence France-Presse (AFP). "I have 782 screenshots of abuse – mostly on Twitter – targeted at me. And these are just from the past year."

The perpetrators, she believes, have "political backing" as part of a growing trend of ugly Islamophobia under India's Hindu nationalist government. The government has not commented on the latest scandal. It denies being anti-Muslim.

Ahmad sent a legal notice to Twitter reporting multiple derogatory posts but no action had been taken, she said. Twitter has not commented on the case.

The victims in the latest case included researchers, analysts, artists and journalists, according to the National Commission for Women.

Ahmad, whose heart now races every morning before she checks her phone, said the abuse was aimed at insulting Muslim men too.

"When you want to attack somebody, you attack the women of the house. That is the sensitive spot," she said.