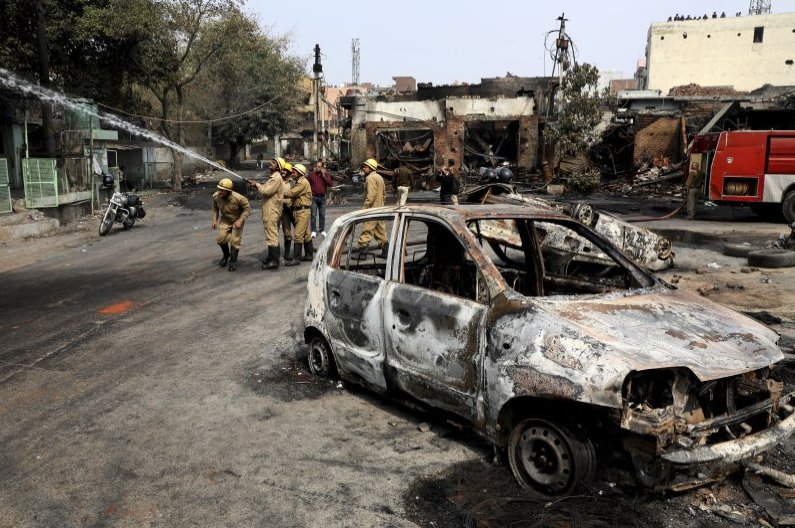 A government-appointed commission promoting the rights of India's religious minorities said police failed to protect Muslims campaigning against a new citizenship law during violent riots in Delhi this year.

At least 53 people, mostly Muslims, were killed and more than 200 were injured in the worst communal violence in the Indian capital for decades. The clashes erupted amid an outcry over a new federal law laying out the path to citizenship for six religious groups from neighboring countries, except Muslims. Critics said the law was discriminatory and flouted India's secular constitution.

The Delhi Minorities Commission (DMC) said Muslim homes, shops and vehicles were selectively targeted during the rioting that erupted in northeast Delhi in February when protests against the new Citizenship Amendment Act (CAA) broke out across the country. In all, 11 mosques, five madrasas or religious schools, a Muslim shrine and a graveyard were attacked and damaged, a team from the commission said in the report released on Thursday.

Recommendations made in the commission's report to safeguard minority rights are not binding. "Seemingly, to crush the protests, with support of the administration and police, a retaliatory plan of pro-CAA protesters was worked out to trigger violence on a large scale," it said. The commission said police had charged Muslims for the violence even though they were the worst victims.

Critics of Prime Minister Narendra Modi's Bharatiya Janata Party (BJP) government say it has been promoting a Hindu-first India and that the citizenship law aimed to further marginalize the country's 170 million Muslims.

India’s capital has been a focus of unrest against the citizenship law, which makes it easier for non-Muslims from three neighboring Muslim-dominated countries to gain Indian citizenship. Protests have broken out across India since the law came into force in December.

India, with a population of over 1.3 billion, is 80% Hindu and 14% Muslim, which means it has one of the largest Muslim populations of any country in the world. There have been growing questions about the stance of the government, led by Modi’s Hindu nationalist party, toward India’s 172 million Muslims. Attacks on minorities, especially Muslims, have risen sharply across India in the last few years under Modi's leadership.

The citizenship bill’s passage follows a contentious citizenship registry exercise in Assam intended to identify legal residents and weed out those in the country illegally. In 2018, the Indian government excluded more than 4 million people from a draft list of citizens in the border state of Assam, mostly Bengali-speaking Muslims who could not produce valid documents. The move created fear among Muslims who believe that their fundamental rights as Indian citizens are at risk.